COVID-19 > Looking out for one another: Residents offer relief during pandemic

Looking out for one another: Residents offer relief during pandemic

While the Virgin Islands shuts its borders, restricts public gatherings, and closes all public and private schools amidst other measures to contain the novel coronavirus, concerned residents have mobilised to …

END_OF_DOCUMENT_TOKEN_TO_BE_REPLACED 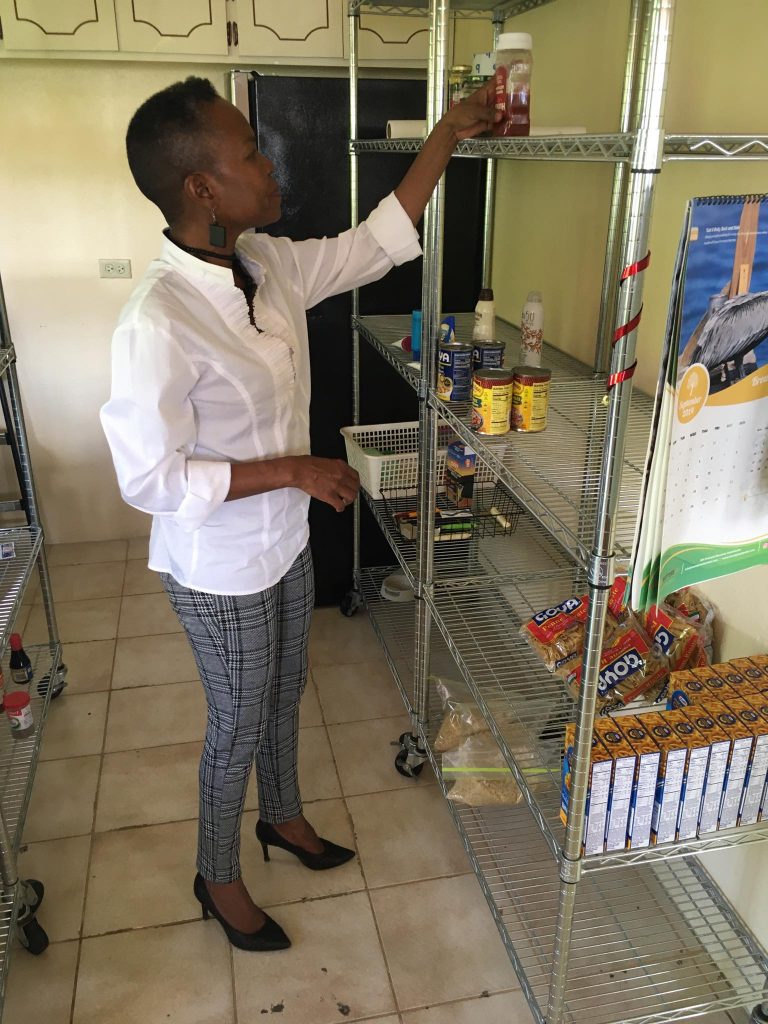 With supplies running low at the Family Support Network food pantry, officials there they will need donations of more food and goods as the economic strain of the coronavirus wears on. (Photo: JOEY WALDINGER)

While the Virgin Islands shuts its borders, restricts public gatherings, and closes all public and private schools amidst other measures to contain the novel coronavirus, concerned residents have mobilised to support their community.

In recent days, a group of friends partnered with the VI technology company MicroAntix Networks to start bvihands-free.com, a website that matches residents in need with those able to assist, said Alexandra Durante, who helped found the site.

“It’s basically a group of like-minded individuals that came together, and [the website] doesn’t cost us anything but will help a lot of people in the long run,” Ms. Durante said.

The website — which Microantix built for free and is hosting on confidential servers — went live on Friday and has amassed a list of about 40 volunteers, Ms. Durante said.

By the end of the week, she and other organisers hope to sign up 60 volunteers, at which point they will begin offering their services to people in need, she said.

The website has also partnered with the Youth Empowerment Project and the Family Support Network to assess and meet community needs, and the Tortola Ladies Club has been enlisted to read emails and recruit volunteers, Ms. Durante said.

On the website’s front page, users can fill out a form asking for contact information and their location, and then tick off the boxes for ways in which they need assistance, from paying electricity to completing chores to caring for pets.

The genesis for the website came after Ms. Durante decided to donate hand sanitiser to the territory’s senior homes, she said.

Quickly, she realised that “other people like me were equally concerned with … people in general that are going to be needing assistance, because it’s going to be a big hit on the economy,” she said.

After seeing posts from people who wanted to offer monetary assistance to residents impacted by the restricted economy, Ms. Durante and Liz Carolina Barahona set up a Facebook group that became a sounding board for people interested in offering their support.

Somebody in that Facebook group reached out to MicroAntix, and the rest of the members offered their advice and input as the site came to fruition, Ms. Durante said.

“It’s good to get all the help we can because we all have jobs as well,” she said, adding, “It’s good to see the community actually coming together in different areas to help us.”

To quell the spread of coronavirus in the territory, and to support residents whose paycheques have dried up or who have otherwise been impacted by government preventive measures, FSN is committed to keeping its doors open, Ms. Stoutt said.

But this requires making some significant operational changes, she added.

The non-profit has adopted “skeleton shifts” where one person oversees the food pantry rather than three, as is customary.

Additionally, FSN has reduced its office hours and now closes at 1p.m., though those who need assistance later in the afternoon can call ahead of time to make arrangements for a staff member to assist them, Ms. Stout said.

FSN workers are also implementing social distancing measures by eliminating hand-transfers of foods and requiring visitors to sanitise their hands, she added.

The director has also considered instructing people to wait outside the building while staff assemble the food and bring it to the door, but she is wary of sending a signal that needy people are unwanted during this potential crisis, she said.

“We are trying to explain what we are doing … We have to take pre-cautions,” Ms. Stoutt said, adding, “Prevention is better than a cure.”

In one instance, FSN staff delivered food to a home where both the mother and child were sick, Ms. Stout said.

To ensure safety, the worker notified the woman beforehand and left the food outside after making eye contact with her, Ms. Stout explained.

As of Tuesday, the numbers of people visiting the pantry had fallen from the week before, but the organisation is still having trouble stocking its shelves, according to the director.

With the demand for the agency’s services expected to surge as the economic strain from the coronavirus wears on, FSN needs more food donations, Ms. Stout said.

Though the organisation helps anyone in need, it does require them to fill out an intake form disclosing earnings and other financial matters, the director explained.

“We want to know who you are financially, to make sure you are in a place where you can benefit from our programme,” she added.