Countdown to election under way

After months of speculation, Premier Dr. Orlando Smith announced last week that the general election will be held on Feb. 25. The House of Assembly was officially dissolved the following …

END_OF_DOCUMENT_TOKEN_TO_BE_REPLACED 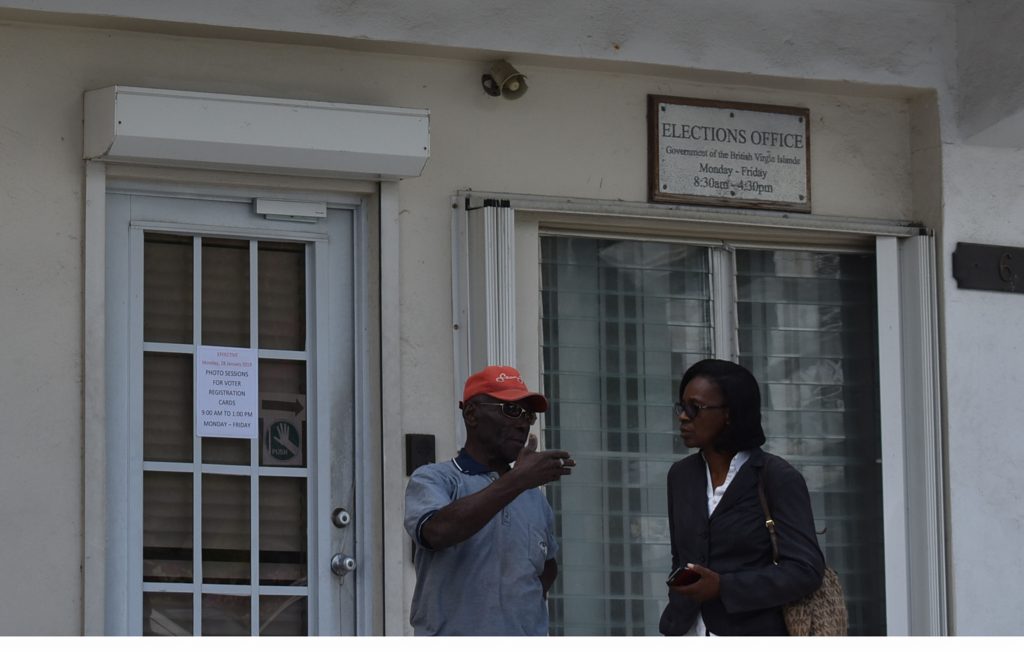 The Road Town elections office has been abuzz with activity as residents register to vote and receive their registration cards. (Photo: AMANDA ULRICH)

After months of speculation, Premier Dr. Orlando Smith announced last week that the general election will be held on Feb. 25. The House of Assembly was officially dissolved the following day on Jan. 24.

Now, the pressure is on for Elections Supervisor Juliette Penn and her staff, who are working to register voters, educate residents about the new machines that will be tabulating votes, and turn the recently finalised “code of conduct” for political parties and candidates into a helpful brochure.

On Monday, the last day for all eligible voters to register, a line stretched out the door of the elections office in Road Town. The next day the line was gone, but the office was still bustling.

“Today is not as hectic as yesterday,” Ms. Penn said on Tuesday, adding, “but I think it will continue [to be busy] until we cut off right before election.” She added that voters can get their photos taken for registration cards in every district.

This year marks the first election in the territory where machines will be used to scan ballots, which means there will be no more hand-counting, Ms. Penn said. Paper ballots will still be used, though there will only be a single ballot for both district and at-large candidates, she said.

“We’ll be out in the public before the elections with more demonstrations of the machine and showing what the ballots will look like,” Ms. Penn said.

And on Election Day, voters will have many candidates to choose from.

At least two independent candidates and four political parties — the National Democratic Party, the Virgin Islands Party, the Progressive VI Movement and Progressives United — are currently vying for office. More contenders could come forward before Nomination Day on Feb. 11, after which all candidates will be known.

The new parties have sparked discussion about a possible disruption to the two-party system that has dominated VI politics for the last two decades. If no party achieves a seven-seat majority in the House of Assembly, a coalition government, which would allow for multiple parties to govern together, could form.

As for the new code of conduct — a measure that has been advocated for locally since at least 2007 — a draft of the document was released last November, and a final version was included in the recently passed Elections (Amendment) Act, 2019, which has not yet been released to the public.

According to the November draft, the purpose of the code is to “promote conditions that are conducive to free and fair elections and a climate of tolerance in which electioneering activity may take place without fear or coercion, intimidation or reprisals.”

There were several prohibited actions outlined in the preliminary code.

For example, no political party, candidate or supporter can discriminate based on the grounds of race, ethnicity, sex, gender, class or religion in connection with an election or political party. The document also bans preventing the distribution of leaflets and the display of posters of other parties and candidates.

Ms. Penn said the final code will be posted online soon, and likely also will be released as a brochure.

In announcing the much-anticipated election date last week, the premier spoke briefly about his time in office, including various successes and challenges under the National Democratic Party government, which won both the 2011 and 2015 elections.

“Things were going right and then, of course, Irma and Maria came along and they’ve caused quite a dent,” he admitted. “But, Madam Speaker, I must say that despite that, and because of the way I think we’ve been managed, I think we’re still quite doing well as far as the economy is concerned.”

Dr. Smith also acknowledged that there have been recent “challenges” to the financial services industry, including the threat of a European Union blacklist, which required the hastily passed “economic substance” law.

“But as everybody says, especially those in the sector, there have been challenges all the time and we’ve always, you know, sought to do what we have to do to establish ourselves as a well-regulated jurisdiction so that everybody will recognise us as such and be able to continue to work with us,” he said.

Opposition members have often told a different story about the NDP’s time in power, and sharply criticised the administration’s handling of the hurricane recovery effort. Certain NDP pet projects, including the failed $7.2 million BVI Airways deal and more than $30 million in overspending in the construction of the Tortola Pier Park, have received particular disapproval.

But the premier, who is stepping down as NDP leader, ended his remarks last week on a positive note.

“So I wish all my colleagues well, and I wish by the time all this is over we have a House that is working well together and in sync and moving this country in the right direction forward,” he said.