This article originally appeared in the Beacon’s Sept. 20 print edition. On Tuesday, government officials and members of the judiciary gathered at the Supreme Court to mark the opening of …

END_OF_DOCUMENT_TOKEN_TO_BE_REPLACED 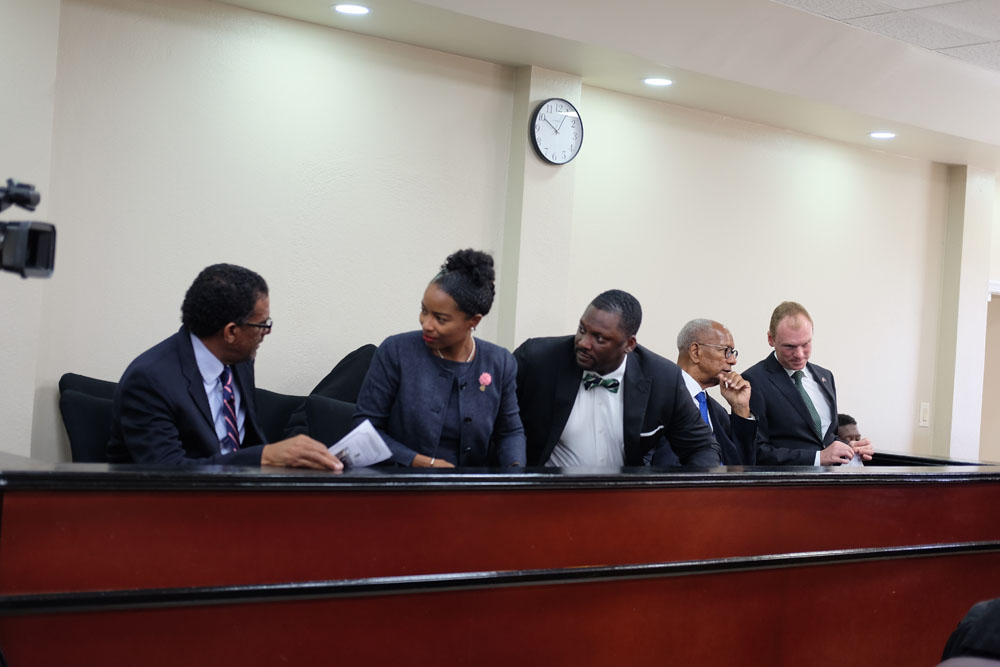 Members of the judiciary and government officials gathered on Tuesday to mark the new law year of the Eastern Caribbean Supreme Court. (Photo: AMANDA ULRICH)

This article originally appeared in the Beacon’s Sept. 20 print edition.

On Tuesday, government officials and members of the judiciary gathered at the Supreme Court to mark the opening of the 2018 and 2019 law year — and to take a hard look at the successes and challenges of the past turbulent 12 months.

Chief Justice Dame Janice Pereira set the tone for the ceremony, delivering the feature address via videolink from St. Kitts and announcing several programmes that the Eastern Caribbean Supreme Court is working to roll out across member states, including the Virgin Islands.

The chief justice reminded listeners that while many courts struggled after hurricanes Irma and Maria, the framework of the ECSC allowed for any judge
within the court — regardless of state or residency — to hear matters from any affected member state in another member state.

“[The storms] provided an opportunity for our communities to truly experience firsthand the positively unique character of the Eastern Caribbean Supreme Court, and what it truly means to be a regional court,” she said. “Although disasters may cause the court to bow, disasters should never be allowed to cause the court, and access to justice, to become broken.”

But many other speakers noted that there’s much room for improvement locally and throughout the Eastern Caribbean.

Gerard Farara, a senior partner and head of dispute resolution at Collas Crill, warned that the VI has long neglected to provide proper court facilities for the Magistrates’ Court and High Court, and has underfunded police and law enforcement agencies.

“[Last year’s hurricanes] brought into stark focus the importance of the preservation of security and law and order to the economic wellbeing and prosperity of the BVI and to the quality of life we have all come to enjoy,” Mr. Farara said.

In her address, Dame Janice gave details about several major initiatives the ECSC has been working on, including a sentencing-guidelines project that began in November 2016.

Over time, it became more obvious that the sentencing process in criminal trials across Eastern Caribbean states was being approached in different ways, she said. Considering that the particulars of a sentence are typically of keen interest to the public, it’s important for the process to be consistent, she added.

“The passing of a sentence may not just be done right, but must be also be understood as having been done right,” Dame Janice said.

The sentencing guidelines, therefore, will aim to bring more consistency to the sentencing approach, she explained.

In July of last year, a sentence advisory committee was established, and the group began crafting draft sentencing guidelines for use by judges and magistrates. The first set of draft guidelines relate to drugs, firearms, theft, robbery and sexual offences, the chief justice said.

“Viewed through the eyes of the public, it is not so much the ultimate sentence arrived at, but rather understanding the reasoning leading to that sentence,” Dame Janice explained. “The aim of this project is not to achieve uniformity of sentences, but rather consistency in the approach to sentencing.”

Another crucial initiative the ECSC has been working to implement is a sexual-offences model court, the chief justice told the judiciary.

The number of sexual offences brought before the court in recent years is on the rise, perhaps due to the fact that more victims are speaking up, she said.

Now, the goal is to improve the court’s ability to provide more “gender-responsive services” and be “more focused and understanding” of sensitive cases involving victims of sexual offences, she explained.

“It is important that the court be equipped to deal with these matters in a way that also addresses the sensitivity of these types of cases, particularly as it relates to the vulnerability of complainants involved, especially children and young persons,” Dame Janice said.

After review, the ECSC decided that Antigua and Barbuda was best suited for a trial run of the sexual-offences model court. Dame Janice said she hopes that court will be operational by the end of 2018, and that the successes from the Antigua pilot will lead to implementation of similar courts in other territories.

The chief justice also announced that the court has been working with the company CrimsonLogic over the past year to design and customise an “e-litigation portal” for the ECSC.

After the platform is launched, it will no longer be necessary for legal practitioners to spend time travelling to the physical court office to file a claim or document in a case, or worry about beating the office’s closing time, Ms. Pereira said.

By using the portal it will be possible to file documents anytime from anywhere, she said, describing the current cumbersome process of waiting for a file to be pulled from “some distant vault [or] cabinet.”

“I have not seen a court office in recent times that does not suffer from inadequate space, while the mountains of paper continue to grow up around the court staff,” she said.

The ECSC is now ready to launch the system, starting with St. Lucia and to be followed “in short order” by the Virgin Islands and Anguilla, the chief justice said. The rollout will continue until all member states are linked.

“[The portal] will bring about tremendous time and cost savings for current users and legal practitioners,” she said. “I see this step as the dawn of a new day in our continual stride to improve access to justice and delivery of justice.”