Though no cases of COVID-19 coronavirus have been confirmed in the Virgin Islands, government continues to take precautionary measures that include preparing a wing of the hospital as an isolation …

END_OF_DOCUMENT_TOKEN_TO_BE_REPLACED 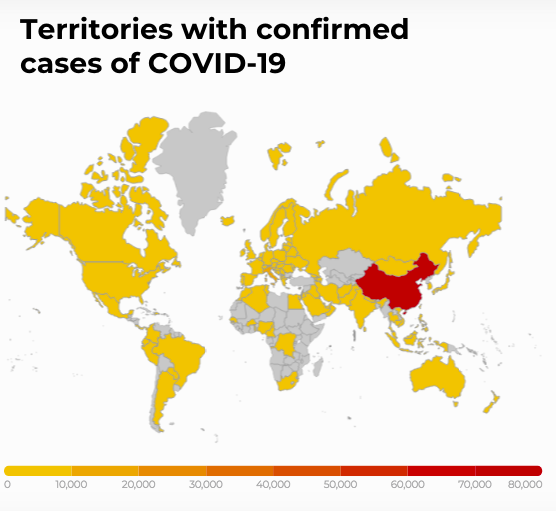 On Wednesday, the World Health Organization declared coronavirus a pandemic. (Graphic: WHO)

Though no cases of COVID-19 coronavirus have been confirmed in the Virgin Islands, government continues to take precautionary measures that include preparing a wing of the hospital as an isolation centre, banning visa-free entry for Chinese nationals, and enhancing workplace guidelines to facilitate remote work and more flexible sick leave in the public service.

Yesterday the World Health Organization classified the outbreak as a pandemic, and 121 of 196 countries in the world have confirmed cases of the virus.

The Virgin Islands, however, is not among them, and samples from three suspected cases tested negative last week.

Nevertheless, the government has agreed to fund supplies and equipment necessary to prepare two floors of the hospital as an isolation centre with 24 beds, Deputy Premier Carvin Malone said Tuesday on the talk show “Honestly Speaking with Claude Skelton-Cline.”

The visa-free travel initiative for nationals of China also has been suspended, and travel bans for people coming from China, Singapore, Italy, South Korea, and Japan have been issued “due to the rapid increase” of the virus in those areas, added Mr. Malone, who is also the minister of health and social development.

Additionally, clearance will be denied for any cruise ship with a passenger or crew member with recent travel history to an affected area who also exhibits symptoms and does not have a negative test result.

Mr. Malone said officials will be assessing protocols for people here who have travelled to Italy as well.

While the National Emergency Operations Centre continues to operate at Level One, Deputy Governor David Archer Jr. has issued workplace guidelines. All public and private sector entities are encouraged to offer remote work options and flexible sick leave policies, according to a government press release.

The territory is equipped to test patients, but the Caribbean Public Health Agency, headquartered in Trinidad, is the only regional lab that can validate COVID-19 tests, according to a statement Mr. Malone issued on Tuesday.

He previously stated that the government has allocated “initial funding” of $3 million to “assist with preparedness and response efforts.”

The government, he said, is also “setting up quarantine areas at the ports.”

On March 4, government announced that negative results had returned for three suspected cases in the territory.

Two of those suspected cases had not been previously disclosed. During a press conference called the previous week amid rumours circulating on social media, officials admitted that one person had been placed under quarantine in their home, but did not mention the other two suspected cases.

No further information has been provided about those two, and government Chief Information Officer Desiree Smith declined to comment this week.

On Feb. 26, government also turned away a cruise ship with passengers traveling from Italy, which has been hit hard by the virus. Yesterday, the same ship, Costa Favolosa, docked in the territory and brought thousands of passengers with it, many from Europe.

On Tuesday, the BBC reported that Wuhan, China, which has remained largely on lockdown for the past seven weeks after the virus originated there and spread rapidly, recorded only 19 new cases in one day, signaling a slowing down of the virus in that city.

Italy, meanwhile, is under a mandatory lockdown as the death toll increases. Emergency measures were extended to include travel restrictions and a ban on public gatherings for the entire country.

Italian residents are urged to stay home, while all sporting events including football matches are suspended nationwide.

People travelling by plane will have “to justify themselves,” and train stations are checking the temperatures of passengers, according to the Italian government. Cruise ships have been banned from docking at various ports in Italy.

In the United States, the Centers for Disease Control have published situation reports stating that there have been 938 confirmed cases of the virus in that country, and 29 deaths.

The virus has been confirmed in 39 out of 50 states. Numbers in Washington, New York, California, and Massachusetts are rising.

Officials are setting up a containment area around New Rochelle, a suburb just outside of New York City, according to CNN. In less than ten days, the town jumped from one case to 100 cases, all tracing back to an attorney’s office.

According to Worldometers, a data and statistics website run by developers, researchers, and volunteers, there have been 631 deaths in Italy, and 4,267 worldwide. In 120 countries and territories around the world, there have been 118,533 confirmed cases.

CARPHA has placed the Caribbean at “very high risk” following the confirmation of more coronavirus cases in the region.

Two confirmed cases have been reported in Martinique, five in French Guiana, two in St. Martin, one in St. Barthelemy, one in the Dominican Republic and one in Jamaica.

In Central and South America, there have been 25 cases in Brazil, 15 in Ecuador, 12 in Argentina, 10 in Chile, seven in Mexico, nine in Costa Rica, six in Peru, and one in Colombia, according to CARPHA. One death has been reported in Argentina.

In the VI, precautions against coronavirus were under way by the end of January, and the first suspected cases reached the territory at the end of February, according to the government.

According to CARPHA, COVID-19 virus is a new strain of coronavirus that has not previously been identified in humans and is part of a family of viruses ranging from the common cold to more severe diseases.

National Epidemiologist Harmony Brewley also appeared on Mr. Skelton-Cline’s talk show on Tuesday and said that the virus can be contracted directly or indirectly between persons.

If a person carrying the virus coughs or sneezes on you, she explained, that is a direct way of getting the virus. An indirect way would be by touching contaminated objects and then touching your face.

“The virus can contaminate surfaces for several days,” Ms. Brewley said. “People will normally see the symptoms within three to five days.”

If people notice symptoms, Ms. Brewley said, they should isolate themselves in a room and limit contact to just one other person.

That person can undergo training in how to properly deal with infected persons. She also recommended that bathrooms be thoroughly cleaned.

People who cannot isolate themselves from their families can be removed and quarantined at the hospital, she explained.

At Rite Way in Pasea, a section has been dedicated to a supply of soaps, sprays and wipes. Chief Environmental Health Officer Lionel Michael, who also appeared on the show, encouraged residents to buy such supplies.

At the airports and seaports, he said, all workers, including cleaners, have been trained in how to handle the coronavirus situation. He added that starting on Sunday officials have been handing out medical and travel history forms for all passengers to complete before they reach immigration.

“We are trusting people to tell us the truth,” he said.

A Beacon journalist who entered the territory on Monday afternoon by ferry from St.Thomas, however, received no such form, and was not questioned about where he had traveled.

Mr. Michael said the forms are currently the only screening process the territory has for ports of entry. Equipment to test temperature “should be here” in the territory this week, he added.

Ministry of Health and Social Development Permanent Secretary Petrona Davies said that many of those who carry the virus will only show mild symptoms and won’t even report it.

Those at risk of becoming critically ill are older people and those who have underlying conditions, she said.