Although the Virgin Islands has been testing residents for Covid-19 since the first case was confirmed on March 25, it has fallen behind some of its neighbours in the region, …

END_OF_DOCUMENT_TOKEN_TO_BE_REPLACED 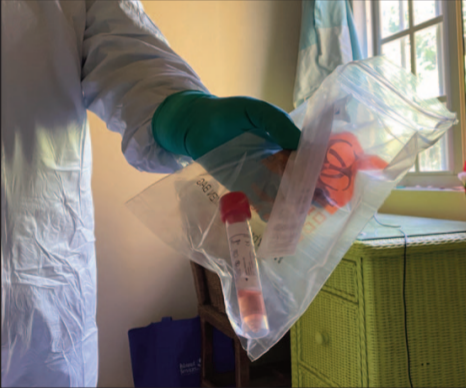 Although the Virgin Islands has been testing residents for Covid-19 since the first case was confirmed on March 25, it has fallen behind some of its neighbours in the region, with a per-capita testing rate that remains well below the level recommended by many health authorities here and abroad.

“We need to do more testing: This is one of the problems that I’m concerned about here,” said Dr. Heskith Vanterpool, owner of Bougainvillea Clinic and Eureka Medical Centre, adding, “If you don’t test, you’re probably missing some of the asymptomatic cases out there who are spreading it to other people.”

A low rate also risks hampering leaders’ ability to determine a safe time to reopen the economy — as they had planned to do this week before a woman with Covid-19 died on Saturday and a fifth resident tested positive over the weekend.

So far, the territory has conducted 90 tests, according to government statistics released Monday. Given a population of just over 30,000, that works out to about 298 tests per 100,000 people, or slightly less than 0.3 percent of the population.

Those numbers put the territory around the upper-middle of the pack in much of the Caribbean. A regional report released this week by the Caribbean Development Bank showed that out of 19 borrowing member countries, the VI ranked sixth in terms of per capita testing rates. The territory ranked far behind top-ranked Cayman Islands (which has administered about 1,183 tests per 100,000 people) and second-place Montserrat (721), but well ahead of the bottom-ranked Haiti (at just over five).

For making accurate predictions about the virus, the United States Centers for Disease Control and Prevention recommend at least 6,000 tests per million people. This translates to about 600 per 100,000 people, more than double the VI’s current rate and about half the rate in the US, where the virus was confirmed more than two months earlier.

The VI would have to perform more than 100 more tests in order to reach the CDC standards, and some experts have recommended a far more aggressive approach.

However, given the scarcity of test kits available here — officials’ announcements suggest that the number is less than 2,000 — a mass testing programme is not feasible yet, according to Chief Medical Officer Dr. Irad Potter.

“The number we are sending [the Caribbean Public Health Agency for confirmation] compared to other countries is small,” Dr. Potter said. “We need to have stability locally to [test] consistently. The entire world is challenged, so from time to time we have the same challenges. Some of these challenges might soon be overcome here, he said: The territory has ordered 10,000 test kits with support from the Pan American Health Organisation, the United Kingdom and private donors.

Using those supplies, officials hope to launch a mass testing programme, according to the doctor.

“When we do decide to do it, we’ll set up a scientific study that looks at two things: finding the cases and understanding the disease,” he said.

Health officials are also working on a system that will enable them to obtain test results faster.

Though the VI has the capability to conduct polymerase chain reaction (PCR) tests, which Dr. Potter called the “gold standard” of testing for Covid-19, the territory still must send samples to CARPHA’s lab in Trinidad for validation.

“We do have a PCR test and staff trained to do the testing. It is new for us: We are going through a validation process, which means when we have the samples we test them locally and then we send them to CARPHA and we are judging whether when we test we are getting the same results as them,” Dr. Potter said. “We’re still doing the validation process. It’s not signed off yet. We need to have stability locally to do it consistently. There is no limit to what we can send to CARPHA.”

Such measures are crucial inthe VI, where 20 to 25 percent of the population has underlying health issues that could exacerbate the symptoms of Covid-19,
he explained.

Though the VI’s testing rate is near the middle of the CDB’s list, the number of confirmed cases here remains near the bottom.

The VI’s five cases put it second to last in the CDB report behind Anguilla, which has confirmed just three cases for a population of 14,977 (the number of total tests performed there, however, is not available).

It is unclear, however, whether the higher numbers indicate a greater spread of the virus or if they are simply a result of the greater numbers of tests administered in those countries. Cayman, which has enacted a lockdown that is less restrictive than the VI’s, has announced mass testing as part of its strategy to reopen. Earlier this month, its government purchased 200,000 test kits from a South Korean company, enough to test every one of its residents three times. The territory had so many extra that it has already agreed to sell more than 55,000 of the kits to Barbados and Bermuda.

Although the US mainland got off to a slow start, in recent days the government there has ramped up testing and has now conducted more than four million tests nationwide as of Tuesday, which equals about 1,265 tests per 100,000 people, according to Worldometer, an international tracking site that draws statistics from official government channels.

However, even in the US, many experts say more needs to be done. In a conference call last week with reporters, Harvard epidemiologist Dr. Michael Mina said testing “needs to become more widely available for sure.”

He also discussed timelines countries would have to meet in order to ease lockdowns and open up the economy.

“We really want to see that this virus has had numerous weeks of decline and very, very low transmission … before we can realistically plan to open up without igniting new outbreaks,” he explained.

Meanwhile, neighbouring Puerto Rico (which was not included in the CDB report) is testing at rates comparable to the VI. Officials have reported at least 64 deaths and more than 1,298 confirmed cases.

As of Tuesday, just over 10,000 people had been tested out of a population of 3.2 million, resulting in a testing rate similar to that of the VI, at approximately
0.3 percent.

PR is currently under a fairly strict lockdown at least until May 3, and it is looking at exit strategies in order to jump-start an economy still recovering from the 2017 hurricanes.

However, experts have said that testing rates in PR are far below those of US states with similar populations. PR has conducted just over 414 tests per 100,000 people. With the US national average at 596 tests per 100,000 people, according to the Covid Tracking Project, that makes PR the lowest compared with any US state. Because of that, they said, the PR government may be using incomplete or faulty statistics in order to prove it has the coronavirus under control.