Ten people, including Governor John Rankin and Minister for Health and Social Development Carvin Malone, led by example by receiving the first of 8,000 doses of the Covid-19 vaccine that …

END_OF_DOCUMENT_TOKEN_TO_BE_REPLACED 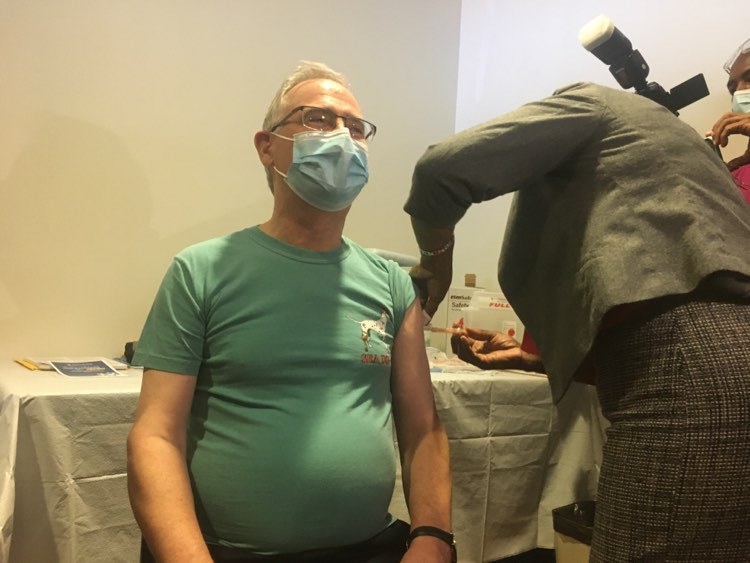 Ten people, including Governor John Rankin and Minister for Health and Social Development Carvin Malone, led by example by receiving the first of 8,000 doses of the Covid-19 vaccine that arrived in the territory this week.

An array of officials queued up to receive jabs during a press conference at Dr. D. Orlando Smith Hospital, included Minister for Natural Resources, Labour and Immigration Vincent Wheatley and Speaker of the House Julian Willock, Leader of the Opposition Marlon Penn and Fourth District Representative Mark Vanterpool.

The government’s vaccine registry portal, which allows residents of all ages and priority groups to register for the vaccine, also went live today at https://ministryofhealth.gov.vg/vaccine/content/covid-19-vaccine-registration.

The arrival of the first 8,000 doses of Covid-19 vaccine in the Virgin Islands was a hands-on affair for the territory’s leaders last Thursday.

Messrs. Rankin and Fahie teamed up with other officials to don reflective vests and head out to the airport runway to personally un- load them from a cargo plane and onto a refrigerated Lucozade truck.

The doses were then shipped to a storage site in preparation for the territory’s first jabs, which were set to start today.

The premier told reporters that the first recipients would be Messrs. Rankin and Malone, who were chosen because they are both over 60 and could not be pregnant.

“When persons see persons like the governor himself taking the vaccine, it will allow them to see there is some safety in it and they’re not just talking the talk, but they are walking the walk,” the premier said.

The shipment of the AstraZeneca vaccine, which was provided by the United Kingdom and eventually will be available for free for all adults who are not pregnant and who want to be vaccinated, arrived on charter flight from the UK to Terrance B. Lettsome International Airport.

With the help of the premier and governor, it was carefully ushered off the plane and onto a waiting truck by Mr. Malone, Chief Medical Officer Dr. Ronald Georges and Transportation, Works and Utilities Minister Kye Rymer.

“If we get as many persons in our population vaccinated as possible, it is going to change the way we handle our restrictions and all the things we have to do related to Covid-19,” Dr. Georges said. “This is going to make sure that we have a large number of our population potentially immune to the disease. We all know the impact that Covid-19 has had on our society and our economy and all spheres of life in the BVI. By having our population covered and immune, we can now look at returning to some degree of normalcy.”

As Mr. Malone explained last week, the AstraZeneca vac- cine was developed by Oxford University’s vaccine-development arm Vaccitech, and unlike other Covid-19 vaccines, it requires no special refrigeration storage.

It is recommended in two separate doses with four to 12 weeks between them, and it has been shown to be 70.4 percent effective in preventing symptoms or hospitalisation after one dose and 90 percent effective after two doses, according to a government statement. That means 4,000 of the
territory’s residents can receive the full course of the vaccine before the next shipment from the UK arrives, Mr. Fahie said.

The territory is also expecting an additional 12,000 doses it had previously purchased through the World Health Organisation-sponsored Covax Facility, which will allow 6,000 more patients to get the jabs, according to the premier. Those doses are expected late this month or next, he said.

Even as the arrival of the vaccines brought hope for normality, doubts about the AstraZeneca vaccine’s efficacy for certain populations have been growing in Europe, though the VI’s medical chief expressed confidence in it.

Shortly after the European Medicines Agency approved the vaccine for use for all adult age groups in the EU, the French health authority announced that it would not recommend the vaccine for people over 65, saying more studies would be needed on its effectiveness and safety. Other European countries have taken a similar position, including Germany, Austria, Sweden, Norway, Denmark, the Netherlands, Spain, Poland, Italy and Belgium. Switzerland, which is not in the EU, has ruled against using the vaccine for any age group, also citing a lack of data.

But the UK and other countries including India, Mexico and Argentina have approved its use for all adult age groups.

“The EU regulators also approved the vaccine in the same manner as the UK,” he said. “These are individual country decisions based on their own priorities.”

Mr. Rankin told reporters during the delivery that he considers the vaccine “a real game changer … that could help the tourism economy get back on its feet.”

“The Virgin Islands has done very well so far to keep the number of [Covid-19] cases to a minimum because of the protocols that have been put in place and because the people in the community have bought into those protocols,” he said.

The governor called the shot he is set to receive today “a safe vaccine” that has “been fully tested by the regulatory agencies.”

The private sector also played a role in assisting the government with transporting the vaccine. The premier thanked Rotary clubs for purchasing the freezers used to store the vaccines and Rite Way for providing a storage location and transportation from the airport.

Both public and private health care facilities will distribute the vaccines using a phased approach, beginning with health care and frontline workers, followed by patients with underlying conditions putting them at severe risk of complications or death from the disease; essential workers; and, finally, all other adults.

Acknowledging that some residents might be hesitant to get the shot, Mr. Malone explained that an “entire public relations campaign” headed by Dr. Georges is set to be rolled out to promote the vaccine as safe so that the VI can keep “most, if not all, of our population” safe from the virus.

As of Tuesday, the Ministry of Health and Social Development reported that the number of active Covid-19 cases stood at eight, with two new cases recorded since the previous up- date on Jan. 27, and eight more patients recovered.

Seven of the current cases were discovered on Day Zero entry screenings, and one during a travel screening.

Six of the active cases were located on Tortola and two on Virgin Gorda, and all are asymptomatic and quarantined. In total, 20,957 samples from 20,746 individuals have been tested at the Dr. Orlando Smith Hospital lab, leading to the discovery of 151 total cases, with one death and 143 recoveries.