Last week, the known active cases of Covid-19 in the Virgin Islands exploded to record highs, climbing from 13 on June 28 to 821 today as the outbreak spread into …

END_OF_DOCUMENT_TOKEN_TO_BE_REPLACED 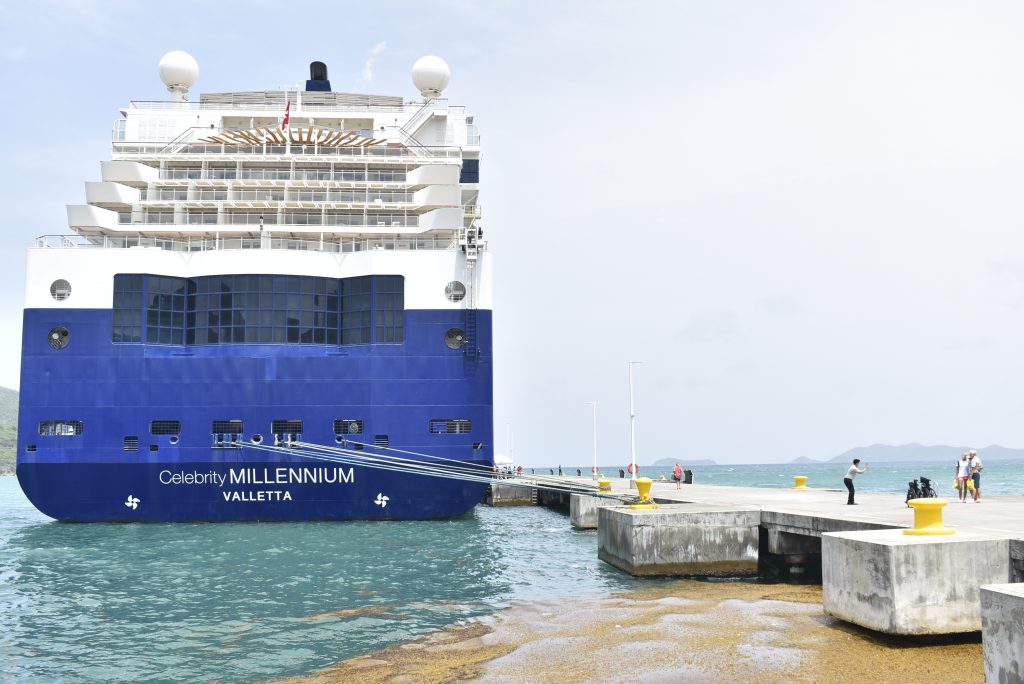 Last Thursday, just as residents were beginning to understand the scale of the latest Covid-19 outbreak, the first cruise ship since the pandemic struck docked at the Cyril B. Romney Tortola Pier Park. (Photo: JOEY WALDINGER)

Last week, the known active cases of Covid-19 in the Virgin Islands exploded to record highs, climbing from 13 on June 28 to 821 today as the outbreak spread into a senior home and health agencies, forced the closure of government offices and businesses, and infected an elderly person who became the second person in the territory known to have died with the disease.

The skyrocketing caseload comes at a perilous time for the territory: In an effort to alleviate the economic depression that has gripped the territory for more than a year, the government had been easing pandemic restrictions, and vaccine numbers are lagging far behind what is required for herd immunity.

“The unprecedented rise in infections is uncharacteristic of previous outbreaks in the territory,” Chief Medical Officer Dr. Ronald Georges warned on Tuesday.

After residents argued online about how to best proceed and who was to blame for the spike, Health and Social Development Minister Carvin Malone announced a return to stricter restrictions on Monday.

In addition to an 11 p.m.-to-5 a.m. curfew, Mr. Malone said gatherings including weddings, funerals and faith-based services will be limited to 25 people, while no more than 65 people will be allowed into a workplace or onto a ferry.

Hairdressers, barbers, gyms, clubs, bars and other “entertainment establishments” are to close for 14 days, Mr. Malone said, though he added that restaurants can stay open for inhouse dining while adhering to a 25-person capacity.

Health officials are also aggressively trying to track the spread, as government on Monday released a community testing schedule that spans three days and Mr. Malone announced that police, customs, immigration, airport and residential care facility employees will be tested at least once every two weeks.

New travel restrictions have also been put in place.

Effective Monday, vaccinated people will be subject to a $50 rapid antigen test upon arrival and will quarantine until they receive a negative result, according to the most recent Covid-19 Control and Suppression Regulations Gazetted Monday.

If this test returns positive, the traveller will remain in quarantine for at least seven days and will not be released until they have a negative PCR test and is “clinically recovered, or unless the person is approved for medical repatriation,” according to the regulations.

Mr. Malone did not say which rapid test has been approved.

Of the 821 cases reported today, 782 were on Tortola, 15 were on vessels, 15 on Virgin Gorda, seven on Jost Van Dyke and two on Anegada, according to a Covid-19 Dashboard update.

Government has not provided similar statistics for the most recent case numbers.

“At the BVI Health Services Authority, 60 staff have been screened as positive and will be cleared in accordance with protocols,” Dr. Georges stated.

To identify the presence of any variants — such as the highly infectious Delta variant, which originated in India and has been detected in neighbouring jurisdictions including St. Martin and Martinique — health officials were set to deliver samples to the Caribbean Public Health Agency yesterday, and they have discussed with Public Health England “alternate arrangements for expediting the typing of specimens to determine the circulating variants in the territory,” Dr. Georges stated.

As the July 31 expiration date approaches for the territory’s remaining vaccine doses, the VI is still far from achieving government’s goal of vaccinating 17,000 people.

As of Monday, 13,761 people had received one dose of the vaccine and 9,517 had been fully vaccinated by receiving two, Mr. Malone said on Monday.

Although health officials had previously urged residents to get their first jab by July 3 so that they could get their second within a four-week time-frame, they are now encouraging residents to take the first dose even if they can’t follow it up with a second.

“Persons who have not received their first dose should still seek to be vaccinated as even a single dose offers more protection over not being vaccinated,” Dr. Georges said, adding, “Vaccination significantly reduces the probability of exposed and vaccinated persons becoming positive by 60 percent to 90 percent and if they do become positive their risk of transmission is further reduced by up to 67 percent.”Dr. Georges added that vaccinated people are between 60 and 90 percent less likely to test positive if exposed to the virus “depending on dose interval,” and that vaccination largely eliminates the threat of severe disease, hospitalisation and death.

Because the risk of a vaccinated person passing along the virus is so diminished, Dr. Georges stated that fully vaccinated people “who are potential or casual contacts of cases and not experiencing symptoms do not need to isolate at this point in time.”

But if vaccinated people who may have come into contact with an infected person do feel symptoms, they should isolate and get tested immediately, Dr. Georges added.

As the number of infections continued to shatter previous records last week, it became clear that a range of public services had been affected.

These services, as well as health care facilities, banks and grocery stores, have responded by shortening their hours, limiting the number of customers allowed inside, or closing altogether.

The law firm O’Neal Webster closed its offices, One Mart limited entry to 40 people at a time, and RiteWay Food Markets is taking a similar tack at all of its locations, which also close at 7 p.m. for sanitisation, except for its Pasea Estate location, which will close at 8 p.m.

Since July 1, the BVI Ports Authority, the Ministry of Natural Resources, Labour and Immigration, and the Labour Arbitration Tribunal all closed temporarily, while the Department of Motor Vehicles closed its Pockwood Pond location from Tuesday until Friday, and CIBC First Caribbean announced on Monday it will be closed until further notice.

Late last week, the return of cruise ships to the territory prompted a public spat between government agencies over the rules surrounding beach access when the ships dock.

Last Thursday morning, the National Parks Trust issued a press release announcing that on days when cruise ships are docked in the territory, the Greater Baths National Park would be closed to residents and non-cruise-ship guests from 9 a.m. to 2 p.m. in order to avoid overcrowding.

But shortly after this statement was released, Junior Minister for Tourism Shereen Flax-Charles joined a small protest at the top of the Baths, and Natural Resources, Labour and Immigration Minister Vincent Wheatley published a statement refuting the NPT’s position.

By mid-day, the NPT retracted its original statement and issued a new one outlining sanitisation and other measures it would take to ensure safety while keeping the parks open to residents and visitors alike.

NPT Director Dr. Cassander Titley O’Neal and Mr. Wheatley could not be reached for comment.