As the current lockdown draws to a close and more Covid-19 test results have come back negative, the government is set to a begin a “phased reopening” of the territory’s …

END_OF_DOCUMENT_TOKEN_TO_BE_REPLACED 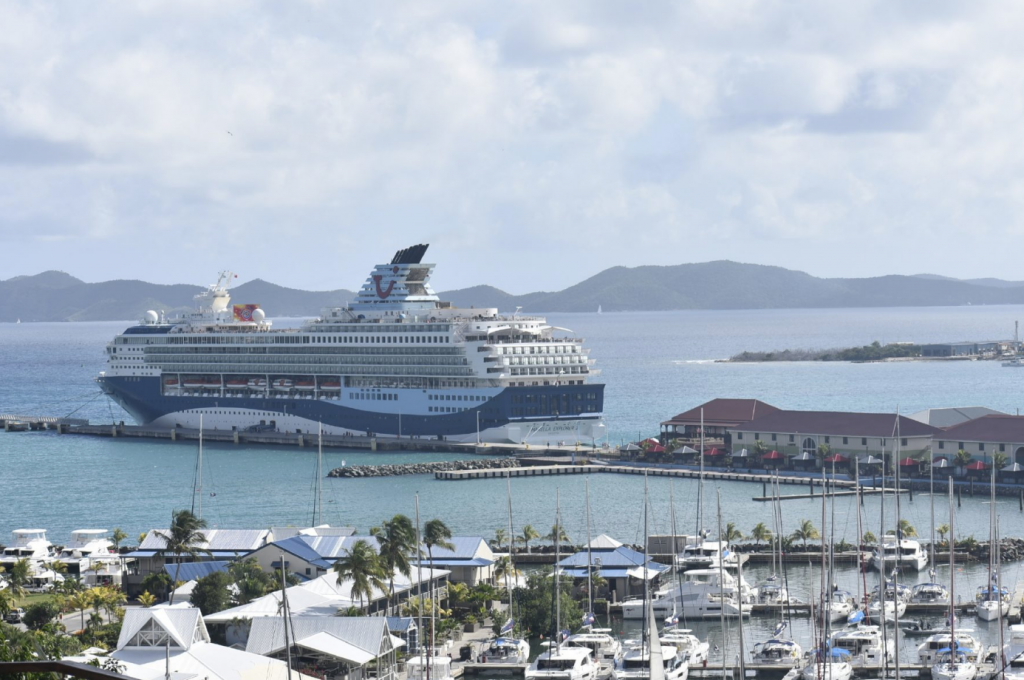 Government is going to begin easing restrictions on April 20 to allow residents to access essential services in the territory. Borders will remain closed until June 1. (File Photo: JOEY WALDINGER)

As the current lockdown draws to a close and more Covid-19 test results have come back negative, the government is set to a begin a “phased reopening” of the territory’s economy early next week, leaders said yesterday during a live Facebook broadcast.

A new “soft” curfew will take effect on Monday, during which time inter-island ferry service will resume and residents will be free to move around the territory during certain hours, but only to buy groceries, frequent other essential services, and engage in limited exercise.

However, access to the Road Town business district will be restricted for the first three days of the new curfew, Governor Gus Jaspert and Premier Andrew Fahie said yesterday during the Facebook broadcast.

Starting Saturday, seniors, business owners and essential workers will be allowed out of their homes to prepare for the lifting of the lockdown, Mr. Jaspert said.

“Having taken advice from our medical teams, Cabinet has collectively agreed to a series of measures to gradually, as is allowed, [ease restrictions] for a structured reopening of essential services and businesses in a safe and structured way,” the governor said.

“These will be kept under review and are therefore subject to change.”

Meanwhile, borders will be closed to inbound travel at least until June 1, according to information circulated by government.

“When the borders do open up in phase two [on June 2], only persons deemed to belong to the territory and persons with resident status will be allowed entry over the next three months, but with strict conditions,” Mr. Fahie said yesterday. “At that time, such entry will only be allowed at the Terrance B. Lettsome International Airport, subject to a pre-approval of passenger information seven days in advance of travel, among other measures.”

Noting concerns that some residents are running low on food, government also has amended the current curfew as of yesterday to allow for home deliveries of food by grocery stores and other approved providers between the hours of 9 a.m. and 3 p.m., and the delivery of cooking fuel between 6 a.m. and noon.

While certain restrictions will lift as part of the new curfew, residents will still be required to stay home from 7 p.m. to 6 a.m. until June 2, Mr. Jaspert said.

Government has ordered beaches to remain closed to discourage gatherings of 20 or more people, which are still prohibited, the governor added.

To avoid congestion in the Road Town central business district during the first few days of the new curfew, government has imposed a staggered system restricting travel into the capital city.

Government later warned that the restrictions would be enforced with roadblocks.

The governor also said that students will stay at home for the remainder of the school year, completing all their assignments virtually, though teachers are free to visit their classrooms if they choose.

During this first phase of recovery, all private boats will be banned from navigating in the territory’s waters, Mr. Jaspert said.

“We know that this will be disappointing for people who want to get back out on the water, but it is important that the efforts of our security teams are focussed on securing the marine border,” he added.

He did not address people who are restricted to living on their boats such as chartered yacht employees.

Officers from the Department of Immigration and Her Majesty’s Customs will form a joint task force with police to patrol the territory, Mr. Jaspert explained, adding that excessive marine travel would hamper this task force’s ability to patrol VI waters.

The lightening of restrictions comes amid reports that no further transmission of the coronavirus has been discovered within the territory since the current lockdown took effect April 4, the premier said.

Despite the plan to ease restrictions, Mr. Fahie warned that the VI’s challenge with the coronavirus is far from over, and it is essential that residents continue to practise good hygiene and social distancing while observing the rules of the curfew.

“The magnitude of this virus is big: It is not a matter that will go away anytime soon. … Let us prepare our minds and actions for the long haul,” he said. “We are not out of the woods yet.”

The World Health Organisation reported yesterday that the global threat from the pandemic is “very high,” with almost two million confirmed cases of Covid-19 globally and more than 123,000 deaths as a result.

In the Americas, there have been more than 670,000 confirmed cases and more than 27,000 deaths, according to the WHO.

But there are signs that restricting people’s movements swiftly and early — as VI leaders have done — is effective in slowing the rate of infection, as some governments consider reopening their economies while the number of new cases levels off.

California is one example. The state enacted the first stay-at-home order in the United States on March 19, requiring residents to remain in their homes barring trips to the grocery store, pharmacy or doctor.

California Governor Gavin Newsom is now readying to modify this decree so that the state can start pumping life back into its economy, according to a Tuesday report from The Los Angeles Times.

Meanwhile, residents of Wuhan, China, where the coronavirus was first reported, were allowed to leave the city for the first time in 10 weeks on April 8, as the city’s 76-day lockdown came to a close, according to an April 7 article in the Guardian.