The National Democratic Party government continued to splinter over the past week as three elected members left the party, including a minister and junior minister who were fired from their …

END_OF_DOCUMENT_TOKEN_TO_BE_REPLACED 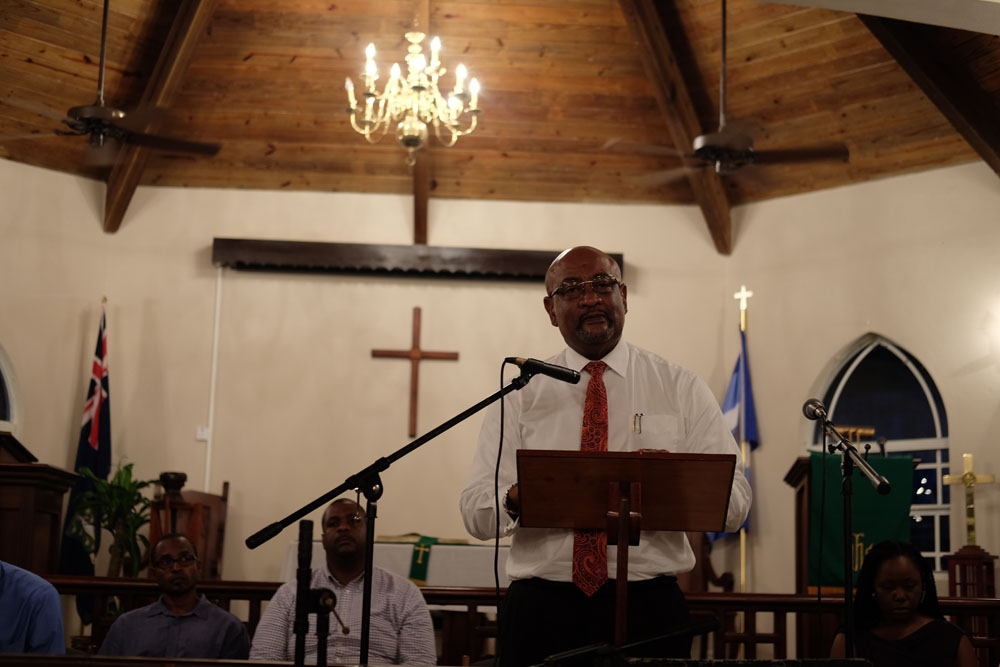 Ronnie Skelton (pictured above at a community meeting in September) was removed from his position as health minister this week. (Photo: AMANDA ULRICH)

The National Democratic Party government continued to splinter over the past week as three elected members left the party, including a minister and junior minister who were fired from their posts.

Premier Dr. Orlando Smith formally announced on Tuesday that after reading a Beacon article published last week — which confirmed that Health and Social Development Minister Ronnie Skelton plans to lead a new political party into the upcoming general elections — he had “no choice” but to ask Governor Gus Jaspert to revoke Mr. Skelton’s appointment as a minister and member of Cabinet.

“It was untenable for him to sit in an NDP administration, make decisions as a member of Cabinet, and form his own party at the same time,” Dr. Smith said. “This constituted a clear conflict of interest.”

Later, Dr. Smith announced that he had advised the governor that Sixth District Representative Alvera Maduro-Caines should be appointed to Mr. Penn’s previous role as junior minister for trade.

Meanwhile, both Archie Christian, the junior minister of tourism, and NDP backbencher Mitch Turnbull resigned from the party last week.

Mr. O’Neal told the Beacon that he is pleased to have been appointed junior minister of tourism and will serve “to the best of [his] ability.”

“Tourism is also vitally important to the district of Virgin Gorda and Anegada, which I represent,” he wrote in an e-mail. “I am pleased to now to be in a position where I would be a key component in the decision-making process of both overseeing the recovery and the enhancement of this industry.”

The news of government’s high-profile resignations and new appointments comes days after the governor announced on Nov. 15 that general elections will be held by April 16.

Though the constitutionally mandated deadline is Aug. 23, Mr. Jaspert decided to push up that date after the premier advised against holding a separate by-election for the Fifth District seat that was vacated when Deputy Speaker Delores Christopher died last month.

“I have received legal advice that the holding of a general election within a period of six months from the date of the death of the member of the Fifth District may be a compromise date between foregoing a by-election and holding a general election,” Mr. Jaspert wrote in a statement. “After careful consideration of this advice, I consider the holding [of] a general election by [April 16] as a reasonable timeframe.”

The governor also mentioned that the Elections Act 1994 and later amendments do not explicitly prescribe set timeframes for by-elections.

“This is something I hope we can address in future amendments to the Elections Act,” he said.

Mr. Jaspert added that the premier will advise “in due course” when the House of Assembly will dissolve. According to the VI Constitution, a general election must be held within two months and no sooner than 21 days after the dissolution of the House.

The premier has not announced when that might come, but he said Tuesday that he hopes his government can accomplish “much more” and implied that he might not call elections until the April deadline.

“Let us make the next six months count, and together put our hands and hearts to the wheel of taking our country forward,” he wrote in his statement.

Natalio “Sowande Uhuru” Wheatley, president of the opposition VI Party, told the Beacon that moving up the general election date was the “right decision.”

“I don’t think having a by-election followed by a general election would have made much sense,” he said, agreeing that the Elections Act should be amended to address such situations.

As for rising tensions within the NDP, Mr. Wheatley said that elections should be held “sooner rather than later” to establish “stable leadership” in the territory.

“Given the destruction that we’ve experienced with the hurricanes, and the significance and importance of leadership at this particular time — especially with passing regulation — I think some of the squabbles that exist in the NDP are somewhat damaging to the territory right now,” he said.

During a press conference on Friday, Opposition Leader Andrew Fahie urged residents to “get involved on all levels” in the next few months.

“Please remember that those who failed you and put you where you are cannot be relied upon to take you out,” he said.

Along with the NDP and the Virgin Islands Party, the two new political parties entering the fray this election could herald the end of the two-party system that has dominated VI politics for almost 20 years.

Mr. Skelton, a long-time NDP stalwart, lost a close election for the party chairmanship to Education and Culture Minister Myron Walwyn in June. That outcome positioned Mr. Walwyn — who has been with the party for about seven years, compared to Mr. Skelton’s nearly two decades — to succeed Dr. Smith if the party pulls a majority in the next election. Mr. Walwyn could not be reached for comment on the NDP’s series of defections.

Others have publicly pledged their support to PVIM, including, most recently, Mitch Turnbull and Archie Christian. Mr. Turnbull confirmed on Friday that he was aligning himself with the Skelton-led party.

“What we’re doing is trying to get back to basics, trying to take it back to the grassroots, where it’s the people and the country first,” he told 284 Media.

Mr. Christian could not be reached for comment on why he has chosen to support PVIM.

A party document obtained by the Beacon also lists Deputy Premier Dr. Kedrick Pickering as a candidate, but Dr. Pickering (R-D7) could not be reached for comment this week or last.

They are also both serving roles within the new party: Ms. Smith confirmed that she plans to run for an at-large seat with the PVIM, and Dr. Turnbull is serving as a strategist for the new organisation.

A short Facebook video — cut with photos depicting Mr. Fraser helping out in the community and on a scooter — served to promote the party this week.

“Let’s make the change … and get ‘trust’ back in government,” Mr. Fraser wrote above the video.

Mr. Fraser has not announced which candidates will run with the party, but referenced the “delicate nature of certain individuals’ arrangements” in a written statement sent to the Beacon this week.

“Progressives United is the result of the search for a solution to a failed leadership which resulted into an economically challenged territory and a people in despair,” it reads. “Our goal is to build on intellect and wealth, develop our resources to the benefit of citizens, protect inhabitants from physical harm and diseases, and ensure our institutions produce people that encapsulate the pride to see themselves as equal among equals.”