Crime bills, others on HOA’s agenda

As Virgin Islands leaders call on the community to help curb crime in the territory, legislators will have an opportunity to debate proposed legislation concerning drugs, money laundering and more …

END_OF_DOCUMENT_TOKEN_TO_BE_REPLACED 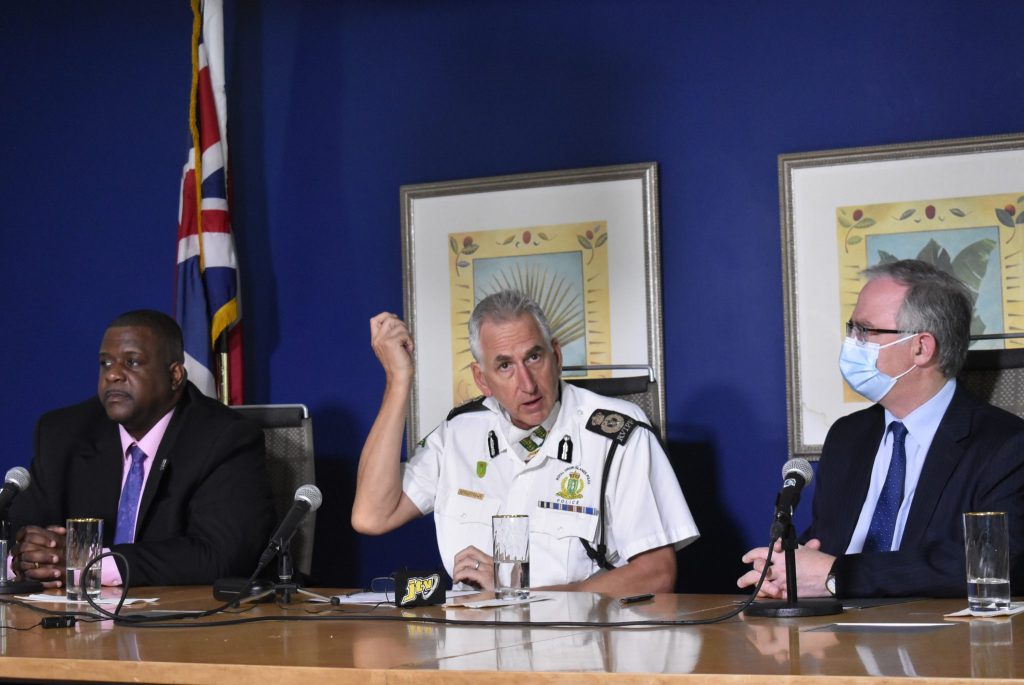 Leaders including Police Commissioner Michael Matthews issued a public plea on March 18 for the community to help deescalate crime in the territory. The House of Assembly, slated to meet next Thursday, has a full docket of potential legislation to head off organised crime including drug trafficking and terrorist financing. (File photo: JOEY WALDINGER)

As Virgin Islands leaders call on the community to help curb crime in the territory, legislators will have an opportunity to debate proposed legislation concerning drugs, money laundering and more when they head back to the House of Assembly next week.

The 23 recently introduced bills include heavy hitters aimed to improve transparency in government, like the Whistleblower Act 2021, but also others to tackle issues like drug trafficking and terrorism financing.

The HOA is scheduled to meet next Thursday, when legislators will have the chance to debate any of the bills brought for first readings during the last session.

One bill on the agenda is the Drug Trafficking Offences (Amendment) Act, 2021, which would update “the territory’s primary legislation on matters relating to drug money laundering activities,” according to the bill text.

The FIA would also assume sole responsibility for suspicious transaction reports, taking away the power of police officers to receive such reports in keeping with a Financial Action Task Force standard to eliminate any doubt about who is in charge of an investigation.

The bill also states that it seeks to widen “the scope of the circumstances under which a police officer or customs officer may seize cash.”

“These enforcement powers will ensure greater certainty with regard to the ability of law enforcement to appropriately deal with cash found in the territory without attaching any specific threshold,” the bill reads. “The governing rule will be the suspicion attached to it in relation to drug trafficking or drug money laundering.”

Terrorism is the focus of two pending bills: the Counter-Terrorism Act and the Proliferation Financing Act. The former, which is designed to bring VI law up to date with international conventions, outlines measures for the “detection, prevention, prosecution, conviction of terrorist activities” within the territory.

This 144-page bill specifies the offences and penalties associated with terrorist acts in the territory, levying up to $2 million in fines and 25 years imprisonment.

In the latter bill, proliferation financing is described as the funding of such activities, like financing the creation or purchase of nuclear, chemical or biological weapons.

That bill — based on recommendations from the United Nations Security Council — also provides a lengthy list of punishable offences, with corporate bodies facing fines up to $500,000 for facilitating these transactions. Individuals could pay up to $250,000 and serve three years in prison.

Other crime is going under the microscope as well, including tax offences. The Criminal Code (Amendment) Act 2021, updating the 1997 law, is designed to help “thwart activities relating to the offence of tax evasion,” according to the text.

For intending to defraud the government, the bill prescribes a maximum 10 years imprisonment and $500,000 fine.

Another bill gives the FIA more power to enforce financial laws in anticipation of the Caribbean Financial Action Task Force’s evaluation coming up this year.

The Financial Investigation Agency (Amendment) Act 2021 would redefine the agency’s role when it comes to investigating money laundering, terrorism and proliferation financing.

Under the amendment, the FIA would have more liberty to seek documents, examine people under oath, and take enforcement action.

Also in the interest of meeting international standards, a new Council of Competent Authorities would be created under the proposed Criminal Justice (Amendment) Act 2021.

This body would ensure the VI’s compliance with international law on anti-money laundering laws, and regulate tax administration and the financial services sector.

It would also aid domestic authorities like the Governor’s Office and Financial Services Commission to meet international enforcement standards.

Cabinet approved establishing the council in 2017.

Another bill would regulate the physical transportation of large amounts of cash in the territory.

“Where a person receives in the territory cash exceeding $10,000 imported or transported from outside the territory by any other means, … including by mail or cargo, he or she shall make a declaration thereof at the place and in the manner the commissioner may direct,” the bill states.

The customs commissioner, meanwhile, would be required to report suspicious activity to the FIA as soon as possible.

But the bill also highlights the importance of not restricting legal trade between the VI and other countries.

In addition to tackling organised crime, the House may consider updates to laws concerning explosives, stamp duty and other areas.

The Explosives (Amendment) Act 2021 redefines explosives to include materials that may be used in a firearm or as ammunition, even blank cartridges.

A waiver for belongers purchasing land would be extended to Oct. 31 under the Stamp (Amendment) Act 2021.