Last week with no warning, police started omitting names from their weekly arrest blotter, effectively withholding the identities of people charged with crimes.  Editor’s note: This article originally appeared in …

END_OF_DOCUMENT_TOKEN_TO_BE_REPLACED 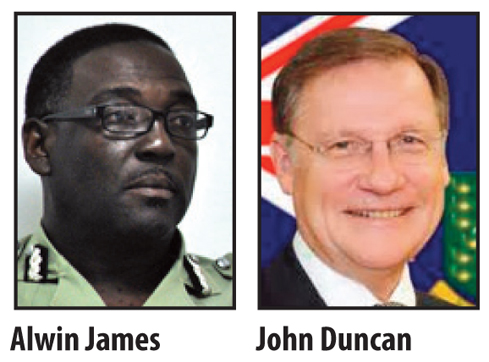 Last week with no warning, police started omitting names from their weekly arrest blotter, effectively withholding the identities of people charged with crimes.

The decision drew criticism this week from transparency advocates who claim that the new practice is out of step with principles of open justice and reduces the effectiveness of a valuable crime deterrent.

A former Virgin Islands police commissioner also weighed in, expressing concern that the policy change was made under an acting commissioner.

Meanwhile, police have remained tight-lipped about the decision, refusing to explain their reasoning in detail or to release their media policy.

That longstanding routine — which is standard practice among most police forces in the United Kingdom — ended at 12:44 p.m. on Oct. 21 when the RVIPF released a blotter that omitted the names of people who were charged between Oct. 4 and 17.

Police have not explained the decision in detail, though Police Information Officer Diane Drayton did release a statement yesterday in response to several questions that she mostly did not answer.

“It should be made clear that it is not the RVIPF intention to withhold information from the public,” Ms. Drayton wrote. “The decision is now that the names of persons charged would not be released before their appearance in court.”

Though defendants’ identities can indeed be obtained during court proceedings, the Magistrates’ Court has three locations throughout the territory and it does not publicly list when and where defendants are to appear. In some cases, they may not appear until weeks after their arrest, and if the charges are dropped they may not appear at all.

Acting Police Commissioner Alwin James has not spoken publicly about the RVIPF decision or responded to requests for an interview.

The chairman of the National Security Council, Governor John Duncan – who has repeatedly called for increased government transparency – has been similarly tight-lipped: He has not answered queries about whether he was consulted on the change and whether he supports it, though Governor’s Office Policy Officer Maria Mays did say that he is aware of the issue and is discussing it with Mr. James.

Premier Dr. Orlando Smith, who also sits on the NSC, did not respond to a request for comment either.

The statement Ms. Drayton released yesterday did not provide details on why the change was made, other than stating, “It is an established practice in many jurisdictions and one that the RVIPF feels, at the time, should be implemented.”

There are police forces — including some in other UK overseas territories — that withhold the identities of people who are arrested and charged. But transparency advocates say those forces are the exception, not the rule, in democracies throughout the world.

“There is a well-established consensus internationally that persons who have been charged with a crime have ‘no right to anonymity,’ as [UK] Home Secretary Theresa May has put it,” according to Scott Griffen, the director of press freedom programmes for the Vienna-based International Press Institute. “Refusing to disclose the names of persons charged with a crime is not in line with international practice, nor does it reflect a commitment to open justice.”

Mr. Griffen also expressed concern about the fact that the RVIPF made the change without offering a full explanation to the public.

“The public has a right to know how and why the police are making decisions about whether or not to identify persons under arrest or charged with a crime,” he wrote in an e-mail. “The current policy needs to be open to debate.”

Police have also declined to provide a copy of the RVIPF Confidentiality, Crime and Media Policy on the grounds that the guide “forms part of a list of internal operational policies and [is] not for public consumption,” according to Ms. Drayton.

“It is worrisome that the police department has declined to provide a copy of the guidelines it is using,” he wrote.

The IPI’s criticisms have been echoed by the Association of Caribbean Media Workers and the United States-based National Freedom of Information Coalition.

“It is unfortunate that the police have taken such a course of action, which does not redound favourably on the question of their transparency as an agent of the state,” stated ACM President Wesley Gibbings.

Former RVIPF Commissioner Vernon Malone also commented on the issue when contacted by this reporter.

Though Mr. Malone said he couldn’t say whether he agrees with the policy change because he hasn’t talked to RVIPF officials and doesn’t know why it was made, he did say that names of people arrested and charged were released when he was commissioner, and that the practice served as a crime deterrent.

“Some people would ask us not to name them, but we did it anyway because it had a crime-fighting effect,” he said.

Mr. Malone added that he was surprised to hear that the change came under Mr. James’ watch, given that acting commissioners don’t usually play a major role in policy creation.

“The role of an acting officer is to maintain the status quo,” he said. “When you’re acting, you don’t change major policies. You keep all their policies in a bundle until the commissioner comes, because he’s the one responsible for policy. You don’t want the commissioner to reverse the things you’ve done.”