A $70 million Havers resort and residential development that has been in the works since 2015 is back on the table and bigger than ever, but it still faces scepticism …

END_OF_DOCUMENT_TOKEN_TO_BE_REPLACED 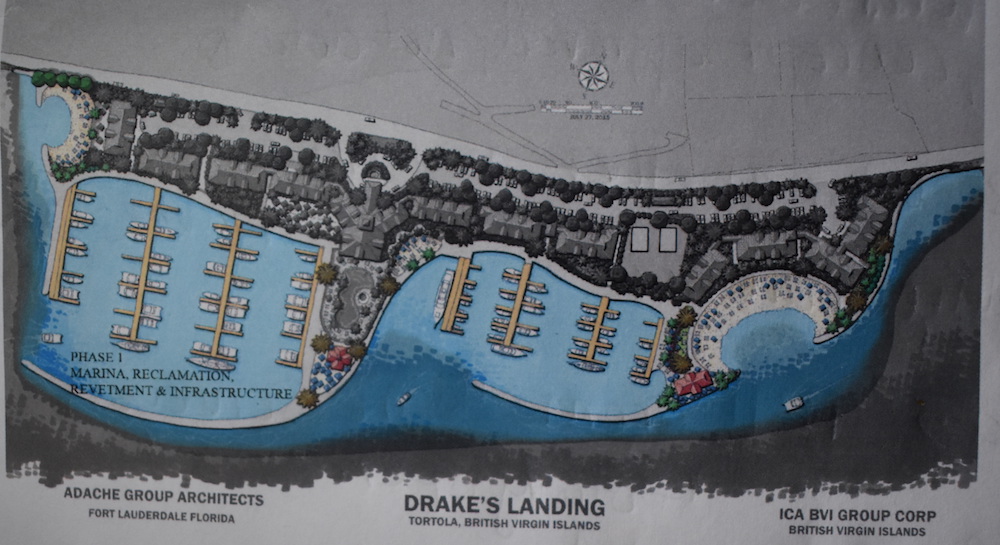 If approved, the $70 million Drake’s Landing development in Havers, shown at left in an artist’s rendering, would be built on 4.2 acres of reclaimed land and would include a 150-room hotel and a 114-slip marina, according to revised plans. (Rendering: PROVIDED)

A $70 million Havers resort and residential development that has been in the works since 2015 is back on the table and bigger than ever, but it still faces scepticism from some community members, who aired their concerns during a meeting last Thursday at the Valerie O. Thomas Community Centre in Sea Cows Bay.

Although previous public meetings have been held on the topic, Greg Adams, chief planner in the Town and Country Planning Department, noted that the project, now dubbed Drake’s Landing after the English explorer Sir Francis Drake, has changed somewhat from the initial plan.

Dr. Cassander Titley-O’Neal, director of Environmental Systems BVI, who completed the environmental impact assessment for the project, described the changes and fielded questions from the community. The developer, Robert Wong, did not speak at the meeting, and when contacted by the Beacon he declined to comment.

Under the new proposal, Dr. Titley-O’Neal said, the amount of reclaimed land has been reduced from 8.6 acres to 4.2 acres.

“All the buildings are on a reclaimed area,” she added. “They are not on anything that exists now.”

The development, however, will contain more units than originally announced, with a 150-room hotel and a 114-slip marina. The marina was expanded after conversations with yacthing stakeholders, who advised that more slips are needed post-Hurricane Irma, she explained.

In addition, the original plan called for one manmade beach and one breakwater, but now the development will get an additional one of each.

Two “twin islands” also have been removed from the plan because they “did not provide enough of a buffer,” Dr. Titley- O’Neal said.

The project, if approved, will take place in phases.

The first, she said, will involve the reclamation of the land as well as construction of the marina, breakwaters, manmade beaches, ship’s store and dockmaster’s office.

Phase two will consist of the hotel and services such as a spa, health centre and restaurants. Subsequent phases will involve the construction of condominiums, the number of which will depend on advance sales.

However, Mr. Adams noted that the final plans have not yet been fully approved and are subject to change based on community feedback.

“The project is approved in principle,” he said. “They are requesting now a full and final approval of the master plan. At this point, it is pending discussion of this meeting tonight.”

Mr. Adams said the development, if approved, would likely unfold in phases over a period of six years.

Other community members expressed doubt about whether that area, which is close to Nanny Cay, wants or needs another marina, and what would happen to the existing homes nearby.

“The existing homes will not form part of the proposed development,” Dr. Titley-O’Neal said.

Although the condo owners own their individual condos, “the developer owns the land and, as such, the developer has to provide access to them.”

However, if the developer chooses to develop additional land, she said he has the right to apply to the regulatory bodies to request permission to reclaim it.

“We’re saying the developer … is proposing another marina,” he said, adding that the meeting was being held in order to gather feedback on any potential impact.

He questioned whether the developers had adequate knowledge of hurricane resilience.

“Tell me which marina in the BVI was not impacted by Irma,” Dr. Titley-O’Neal responded. “I can’t and won’t give you a reassurance. I am not nature. Nature has its own way of operation. There were studies done by a qualified engineer with modeling … to mitigate incidents that have happened before.”

According to Dr. Titley-O’Neal, the need for the development has increased greatly since it was originally introduced, because last year’s hurricanes decimated the territory’s tourism infrastructure.

Plus, she added, in light of the United Kingdom plan to impose public company registers, potentially damaging the financial services industry, “the only thing we really have going for us at this time is tourism. So we can see the need to push a project like this forward that encompasses several areas of the tourism industry.”

According to Mr. Adams, the price tag on the project remains about the same as previously announced, though when asked he conceded that it “might be a little bit more” due to the passage of the hurricanes.

In May 2016, Mr. Wong told the Beacon that he was changing the style of the development to look more “Caribbean” after early community feedback.

At the time, he said it would include a 37-slip marina and six buildings, including a four-storey 36-room hotel with underground parking; a residential building with 15 to 20 apartments; and a community building with a restaurant and shops.

Negative feedback about the project’s potential environmental impact has been aired since the plan’s inception in 2015, and at Thursday’s meeting Dr. Titley-O’Neal and Mr. Adams acknowledged those concerns.

“Every negative concern was addressed in the environmental impact assessment,” she said.

Mr. Adams added that because the project is “talking about reclamation, it’s a natural impact on the environment itself.”