As Covid-19 spread across the Western Hemisphere in the spring of 2020, cruise ships that had been traversing the world’s seas were forced to anchor, leaving the Virgin Islands and …

END_OF_DOCUMENT_TOKEN_TO_BE_REPLACED 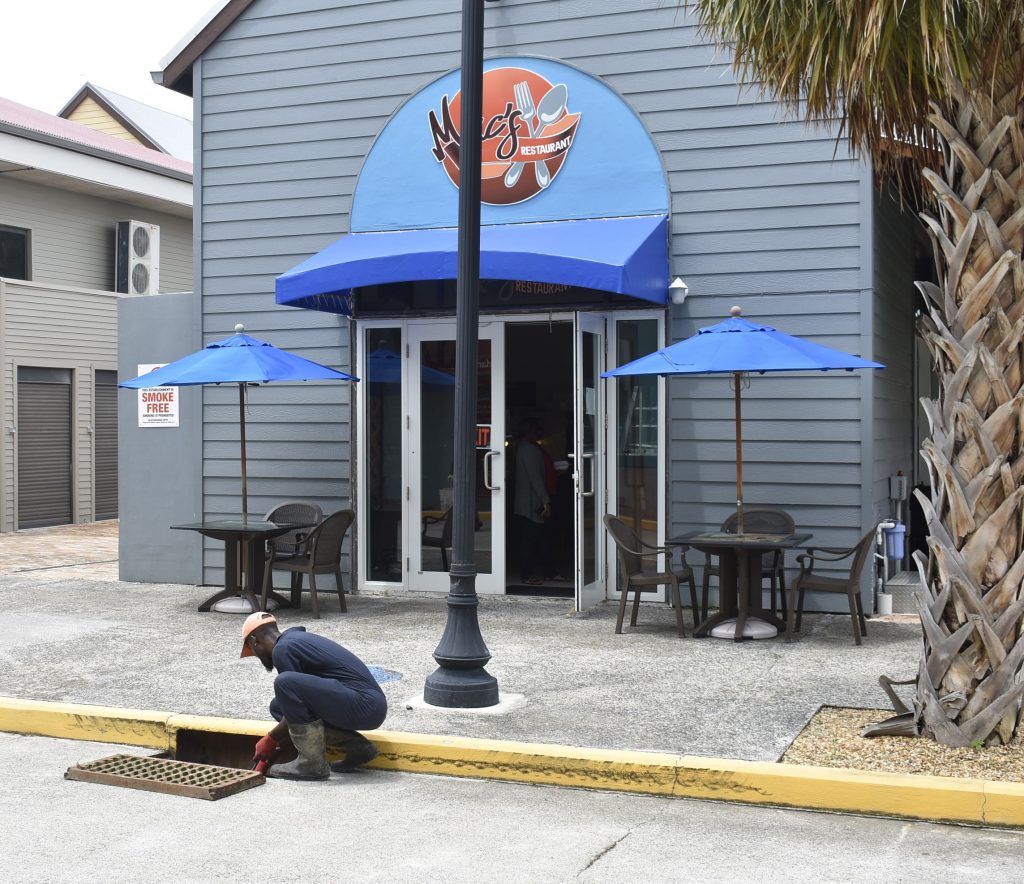 A worker cleans a grate at the mostly empty Cyril B. Romney Tortola Pier Park on Thursday. With the return of cruise ships, which could come as early as Monday, the park may see huge influx of visitors, even as government has yet to release a plan for accommodating the ships and their passengers in the Covid era. (Photo: JOEY WALDINGER)

As Covid-19 spread across the Western Hemisphere in the spring of 2020, cruise ships that had been traversing the world’s seas were forced to anchor, leaving the Virgin Islands and other tourism-reliant jurisdictions without one of their major revenue streams.

That revenue stream is set to come online once again, as cruises could return to the territory as early as Monday, according to CruiseMapper.com.

But as of Beacon press time yesterday afternoon, the government had not released the details of its plans to accommodate the cruise industry in the Covid-19 era.“It is generally understood that it is our intention to restart cruises to fully vaccinated passengers, and all protocols will be adhered to,” Health and Social Development Carvin Malone said in a Tuesday interview.

Beyond that, he said, there wasn’t much he could say, as the particulars about the planned “cruise bubble” were to be discussed at yesterday’s Cabinet meeting.

“After tomorrow I will be able to answer more substantially” questions about the government’s strategy, Mr. Malone said Tuesday.

Premier Andrew Fahie, who was on leave until yesterday, has met with cruise industry leaders in recent weeks to discuss the ships’ return to the territory, though he hasn’t put forth details of any plans or agreements made between government and the cruise lines.

In talks with industry representatives, HSD Ministry and Cyril B. Romney Tortola Pier Park officials discussed details including “how the bubbles will be designed and how they will work ensuring that the visitors get the safe and quality experience while protecting the safety of the local population,” Mr. Fahie said during a March 26 press conference.

He added that the first few cruises to visit the territory will serve as a pilot run for the bubble.

After the Celebrity Millennium departs from St. Maarten on Saturday, the 2,590-passenger capacity ship is expected to arrive in Road Town two days later, according to Cruisemapper.com.

To gird against potential outbreaks, all Celebrity ships will be outfitted with new air filtration systems that the company claims make “the transmission of aerosol particles between spaces extremely low to virtually impossible.”

The cruise line will also require all guests 16 and older to have been vaccinated at least two weeks before departure, a requirement that will extend to all passengers 12 and older beginning Aug. 1, according to the website.

Unvaccinated children will be tested at the terminal prior to boarding, and some homeport jurisdictions may require all guests to be tested, the website states.

The VI government has not said whether it plans to require passengers to be tested here.

As the pandemic first began to spread around the world last spring, many cruise ships were a vector for transmission in the Caribbean, and public health officials are urging vigilance this time around.

Although the United States Centers for Disease Control and Prevention laid out safety guidelines on May 5 for cruise ship passengers, the organisation also recommended “that all people avoid travel on cruise ships, including river cruises, worldwide …. The chance of getting Covid-19 on cruise ships is high since the virus appears to spread more easily between people in close quarters aboard ships.”

The VI had its first brush with Covid-19 last year through cruise ships, though no cases here were reported to be connected to them.

On March 13, 2020, just two days after departing from the VI, 426 passengers aboard theCosta Favolosa were ordered to disembark and placed in confinement in Martinique after two passengers tested positive for the disease.

At a March 17, 2020, press conference, Mr. Fahie said that VI health officials did not detect any positive cases here linked to the ship.

But a day earlier, Rafael Sánchez Cárdenas, minister of public health in the Dominican Republic — from which the ship had departed before arriving in the VI — announced ten new cases of Covid-19, many of which were “linked” to the Costa Favolosa, he said.

On March 25, the VI government announced the first two confirmed cases of Covid-19 here — neither of which was said to be connected to the Favolosa — and implemented a territory-wide curfew.

Winnette Lawrence, a maintenance worker at the pier park, thinks the economic benefit of cruise tourism is worth the risks, she said on Tuesday.

“A lot of businesses are hurting,” Ms. Lawrence said.

She added that because of the Covid-19 restrictions already in place, she is not worried about the potential crowds of tourists the returning cruise ships could bring.

One safety measure she would add is the installation of handwashing stations at street corners throughout the most trafficked areas, she said.

“That could help a lot,” she added.

According to a Monday Covid-19 Dashboard Update, 12,142 people had taken at least one dose of the AstraZeneca vaccine, and 6,952 had taken both doses to become fully vaccinated.

As the doses’ late July expiration date approaches, the territory is still far from its original vaccination goal, leaving government to devise new means of urging residents to take the jab.

After announcing at a May13 House of Assembly that the territory at that time had given 11,036 people their first dose, he said that it “is this government’s intention to intensify the education process aimed at encouraging the remaining 5,964 persons to voluntarily be vaccinated at any of the public and private centres throughout the territory by the 31st of May.”

With May come and gone, health officials have extended the vaccination campaign and are pursuing it with greater urgency.

In a June 1 statement, Chief Medical Officer Dr. Irad Potter said the government is now aiming to vaccinate as many people as possible by July 2.

“It’s a little bit sad,” Medical Officer Dr. Ronald Georges said last Thursday during a government Facebook broadcast, noting that the VI has more vaccines than people who want to take them, whereas most countries have the opposite predicament.

While being vaccinated maynot entirely prevent someone from spreading the virus, it is believed to reduce the likelihood of transmission by 75 to 90 percent, which greatly cuts down the possibility of outbreaks spreading through a community, Dr. Georges said.

In order to use up the vaccine supply before it expires, government has also shortened the recommended wait period between doses, Dr. Potter said.

In the US, some officials have taken unusual strides to push their populations towards vaccination.

Washington State, where recreational marijuana is legal for people 21 and older, announced a “Joints for Jabs” programme that lets eligible adults claim a free pre-rolled joint after they’ve gotten the vaccine.

Closer to home, USVI Governor Bryan Albert Jr. announced on Monday that all territorial residents who have been vaccinated will be automatically entered into a weekly raffle where they have the chance to win $100,000.

On his Facebook page the following day, Mr. Malone asked whether such a bold tactic would work in the VI.

The response was mixed.

Some commenters were in favour, arguing that any effort to vaccinate the public was worth the economic revitalisation it would bring.

Others were more wary, writing that some residents are waiting to see whether there are any long-term health effects from the vaccine, and that these people should not be pressured to disregard these fears.

“This is a new vaccine and it is a hugely complicated situation. So give people time and space to make a decision for themselves without pushing,”one commentator wrote.