Most of the necessary land-side pilings have already been installed at the territory’s cruise pier development site, and the pilings needed for the pier itself are being installed beginning this …

END_OF_DOCUMENT_TOKEN_TO_BE_REPLACED 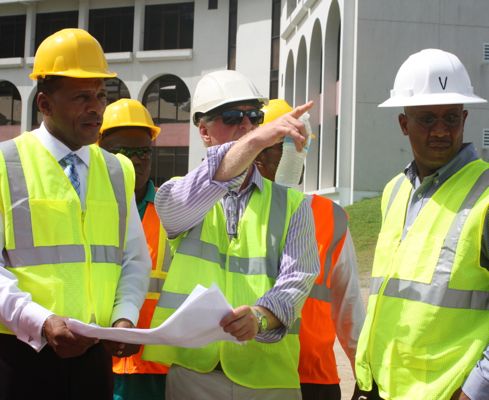 Most of the necessary land-side pilings have already been installed at the territory’s cruise pier development site, and the pilings needed for the pier itself are being installed beginning this week, officials told reporters during a tour of the construction site Monday afternoon.

As many residents will have already observed, workers have been stacking large boulders in the ocean in front of the Central Administration Building. These rocks will form the support for about one acre of fill land already in progress there.

“The existing rock wall isn’t as strong as it could be, but the new one will be much stronger,” said Communications and Works Minister Mark Vanterpool.

He told reporters that the project appears to be progressing on schedule so far, with the seaside portion scheduled for completion in December and the landside works expected to finish in April.