Three days after the cruise ship Costa Favolosa docked in the Virgin Islands last week, two of its passengers tested positive for COVID-19, according to the French Regional Health Agency …

END_OF_DOCUMENT_TOKEN_TO_BE_REPLACED 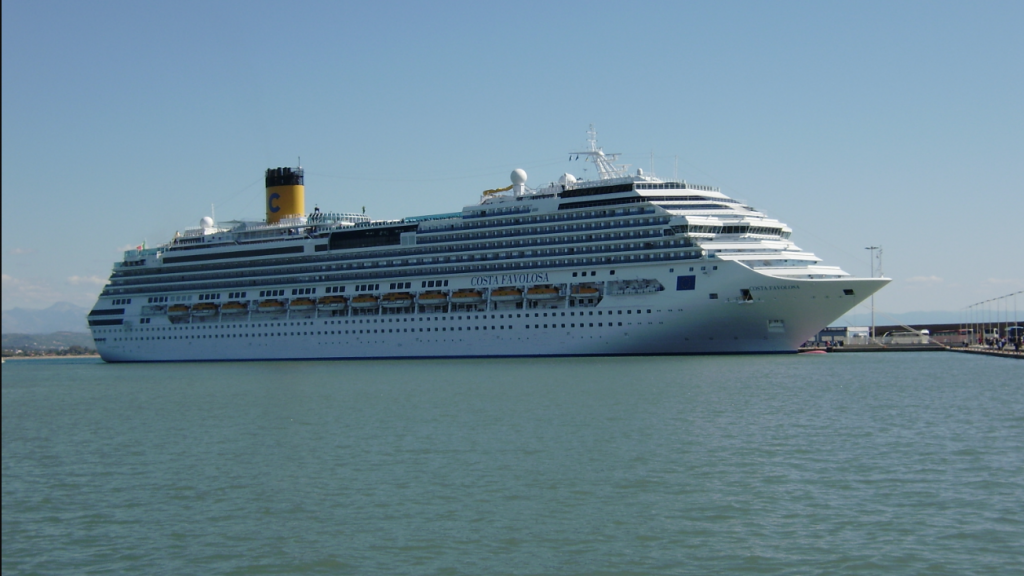 The Costa Favolosa docked in Road Town on March 11. Three days later, two passengers tested positive for Covid-19 in Martinique. Since then, health officials have linked the ship to more than 50 cases of the disease around the region. (Photo: PROVIDED)

Three days after the cruise ship Costa Favolosa docked in the Virgin Islands last week, two of its passengers tested positive for COVID-19, according to the French Regional Health Agency in Martinique.

The 3,617-passenger-capacity ship, which since December has offered a seven-day round-trip voyage from Guadeloupe, docked in the territory from morning until evening on March 11, a Wednesday, and arrived in Martinique Friday morning.

But on Saturday, 426 passengers disembarked the ship on the French island and were placed in “confinement” because two of the passengers had tested positive for the novel coronavirus, according to a Saturday press release from the health agency there.

Representatives of the cruise line denied knowledge of the positive tests this week, and the VI government did not issue any warning.

Asked Tuesday evening if officials here had taken any precautions in light of the positive test results, Premier Andrew Fahie replied, “We didn’t have any signs of it; we didn’t have … anything at all to alert us while the ship was here.”

Though the premier had heard about the cases, he said he had not received confirmation from Martinique officials that the individuals had tested positive as of Tuesday evening.

Additionally, the premier added, it’s possible that the passengers did not display symptoms or contract the virus until after they left the VI: After leaving here and before calling in Martinique, the ship docked in St. Maarten for a day.

“We had a protocol in place for dealing with the cruise ships, and despite that, we didn’t detect anyone with any symptoms,” Mr. Fahie said.

In recent days, however, cases of the virus have also been linked to the ship in the Dominican Republic, which it visited immediately before it called here last week.

At a Monday press conference, Rafael Sánchez Cárdenas, minister of public health in the DR, announced ten new cases of the coronavirus, many of which he said “are linked” to the Favolosa, according to a Monday report on the DR news site El Nuevo Dia.

According to crew-center.com, a cruise shipping website that provides vessels’ itineraries, Costa Favolosa had been in the DR resort town of La Romana on March 9, where it remained until the following morning before sailing to the country’s Catalina Island, from which it departed in the afternoon bound for this territory.

It is unclear where the passengers were from, and attempts to reach the agency for more information were not successful.

Currently, the ship is docked in Guadeloupe while the disembarkation of passengers continues and the company works to send travelers home, according to an unsigned email from the press office of Costa Cruises, which operates the ship.

In the Tuesday email, Costa claimed, “We did not receive official confirmations” of the coronavirus cases in Martinique.

“Costa Crociere [Italian for ‘cruises’] confirms that the company is working with all the relevant authorities to put in place required actions on board and organising further health checks of passengers as required,” the company stated.

Costa Cruises suspended global operations on Friday and is looking to resume April 3, the email explained.

Carnival Cruise Lines, the largest cruise operator under the same corporate umbrella as Costa, suspended its voyages on Saturday and intends to start back up April 10, according to a company press release.

Shortly before press time, Costa’s press office emailed the Beacon saying that there are still 161 passengers set to be disembarked today, though it did not answer questions including how many passengers have been tested, how many of the passengers under confinement in Martinique are from that territory, or what safety precautions they are taking before sending passengers home.

The company maintained that it had not received any “official confirmation of COVID-19 cases onboard the ship.”

Two weeks before last week’s visit to the territory, on Feb. 26, the Costa Favolosa, which at the time carried several Italian passengers, was turned away from port in the VI after three passengers onboard tested positive for an influenza virus, according to the VI government.

The ship did not have the capacity to test for the COVID-19 coronavirus, so “a decision was made to err on the side of caution,” government stated.

The ship later sailed on to St. Maarten, according to multiple news reports, but it is unclear what happened next, and as of press time Costa had not responded to questions about the earlier voyage.

Billed as “Europe’s number one cruise line,” Costa Cruises is a subsidiary brand of cruising powerhouse Carnival Corporations & PLC, which has nine brands under its umbrella.

After this reporter left a message on the number listed as Carnival Cruise Line’s media contact, a corporate officer called back and told him to phone the media number for Costa’s US office and to send an email to a public relations consultant.

This consultant, Buck Banks, answered the phone at the number and instructed the Beacon reporter to send him an email that he would forward to the company’s main press office in Italy. Later in the afternoon, the Beacon reporter received an unsigned email from Costa’s press office, which provided vague information about the disembarking process.

After more questions from the Beacon, Costa claimed not to have any knowledge of the COVID-19 cases mentioned in the official statement by the French Regional Health Agency.