For the first time since last March, two cruise ships docked Monday at the Cyril B. Romney Tortola Pier Park. But they are carrying only crewmembers, and no one will …

END_OF_DOCUMENT_TOKEN_TO_BE_REPLACED 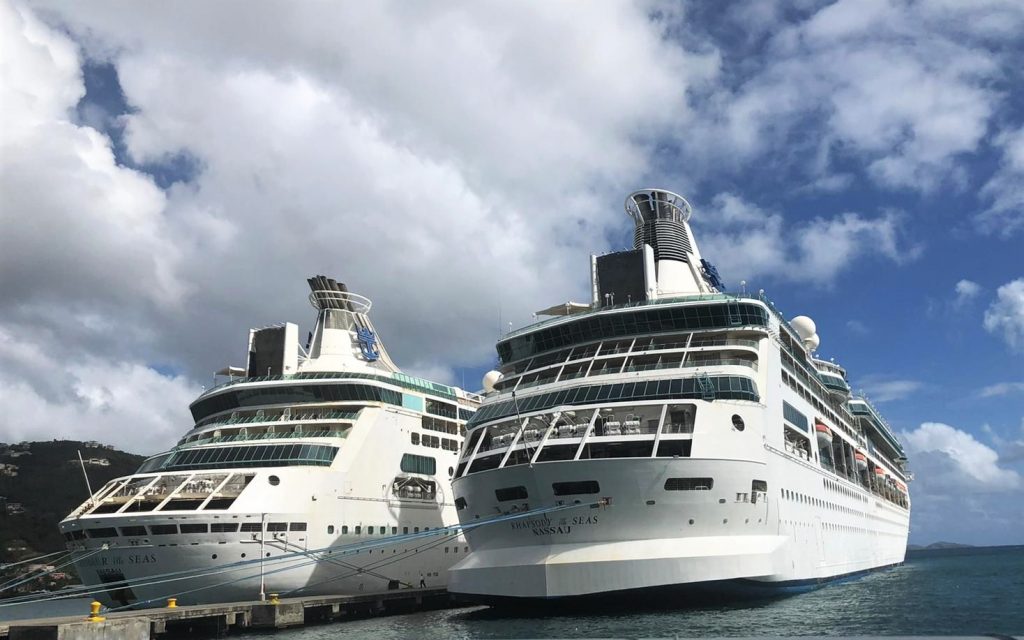 Royal Caribbean International’s Rhapsody of the Seas and Grandeur of the Seas are currently docked at the Cyril B. Romney Tortola Pier Park, but they are carrying only crewmembers who will not disembark. (Photo: ZARRIN TASNIM AHMED)

For the first time since last March, two cruise ships docked Monday at the Cyril B. Romney Tortola Pier Park.

But they are carrying only crewmembers, and no one will disembark, according to the BVI Ports Authority.

Royal Caribbean International’s Rhapsody of the Seas and Grandeur of the Seas are here for an initial period of 30 days for so-called “warm layups,” the BVIPA stated.

“This is not a regular cruise call: The vessel does not have any guests on board, and it will be berthing exclusively to lay up, refuel, take on provisions and spare parts, and possibly other services,” BVIPA acting Managing Director Oleanvine Maynard said in a Monday press release.

She added that the pier is a secure zone, and no one will be permitted to pass a manned security gate.

“As agents for Royal Caribbean, we are indeed pleased to have two of its vessels calling in Tortola,” she said.

The press release also stated that “maintaining a link” with the cruise industry will be vital to rebooting the economy.

The Virgin Islands closed to cruise ships on March 14, three days after the World Health Organization declared Covid-19 a pandemic.

In September, a curfew order opened the door for cruise ships carrying only crewmembers to dock in the VI for extended periods on warm layups.

Officials have not said how much the ships pay to dock here, but the Maritime Executive, an industry news site, reported that Oceania Cruises recently paid “as much as $50,000 a month” for a 785-foot vessel with a skeleton crew of 131 people to dock at a port in Maine.

Sea News, another industry site, estimated a warm layup to cost a cruise ship between $2 million and $3 million per month.