Cruise ships to return in June, with new rules

Cruise ships are now scheduled to return to the territory in June under strict new rules designed to keep the territory safe from Covid-19, according to a Friday statement from …

END_OF_DOCUMENT_TOKEN_TO_BE_REPLACED 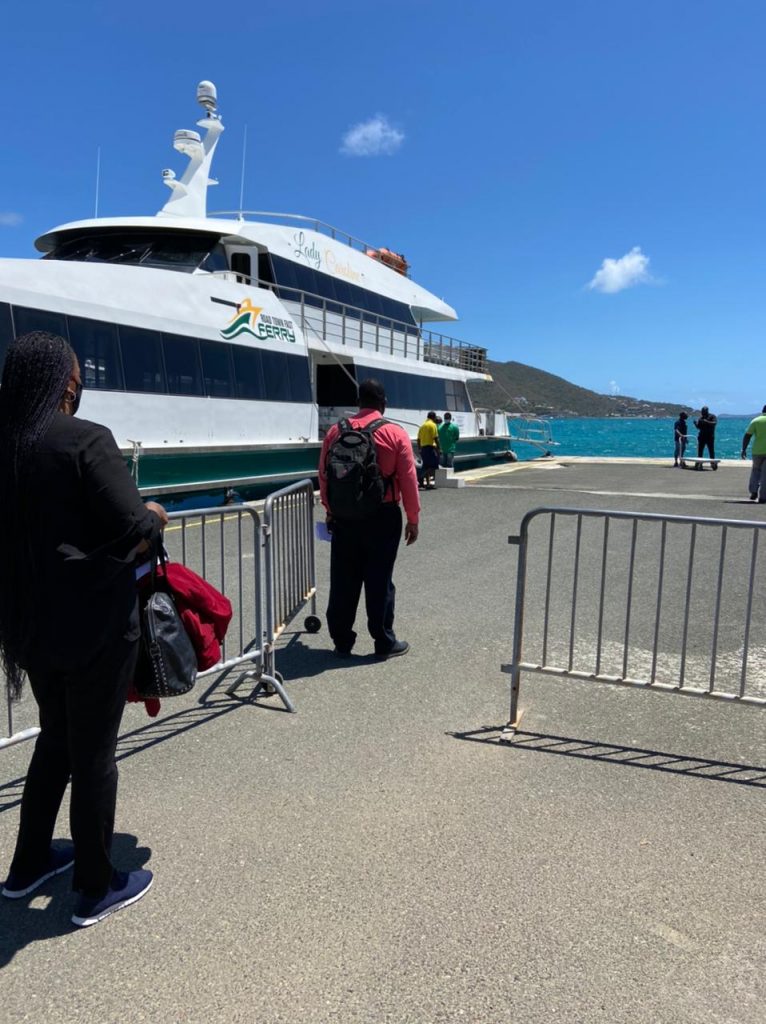 The BVI Ports Authority carried out a ferry arrival simulation ahead of the planned seaports reopening on April 15. (Photo: GIS)

Cruise ships are now scheduled to return to the territory in June under strict new rules designed to keep the territory safe from Covid-19, according to a Friday statement from Premier Andrew Fahie and the BVI Ports Authority that also offered renewed hope that government may stick to its April 15 deadline for reopening seaports to international ferry traffic.

The territory hasn’t hosted cruise ship passengers since March 2020, when an initial 30-day ban was enacted. That ban has now extended to over a year, but it’s set to end in June, according to the statement.

The Celebrity Millennium of Royal Caribbean Celebrity Cruises will be the first arrival, with a twist: All adults on board will be vaccinated against Covid-19.

“Cruise operators must demonstrate adherence to embarkation testing, social distancing, masking and 100 percent vaccination requirements for guests over 18 and all crew,” the premier said.

“These are just some examples of the protocols that will be placed for this sector.”

Despite the vaccinations and other requirements, little interaction between cruise passengers and residents will take place, he explained.

“Whilst we work to define this guidance, we may see it fit in the initial phases to safely accept cruise ship calls as something that is known as a ‘bubble concept’ and this helps to ensure that passengers and residents do not intermingle,” he said.

Mr. Fahie also said the government will stick to its plan to reopen the Road Town Ferry Terminal to international ferries on April 15.

“It is time to further open our borders to allow the entry of more of our marine sector,” he added.

On Monday, the BVIPA staged an interagency ferry arrival simulation exercise alongside ferry operators, the Immigration Department, Her Majesty’s Customs, the BVI Health Services Authority and the BVI Tourist Board.

Preparatory work has begun at both ferry terminals, and Mr. Fahie said government would adhere to “all established health protocols” when welcoming international arrivals by sea.

The opening of seaports to ferries has been delayed three times with short notice, frustrating travellers and tourism stakeholders eager to jump-start that sector of the economy.

During the announcement of the “BVI Love” campaign in September, the premier said that airports would reopen to tourism on Dec. 1 and seaports would open on Dec. 8. At the time, he repeatedly said, “We are ready.” But when the time came, the sea border reopening was pushed back with a day’s notice.

A new “target date” of Jan. 21 was announced the same day, and Mr. Fahie went on to add that the Road Town Ferry Terminal was “still in need of further adjustments and physical improvements.”

Then, on Jan. 5 the BVIPA once again pushed back the reopenin of the seaports, setting a new date for March 1. At the time, the agency stated that the delay was due to health and safety concerns.

Three days before the March 1 reopening, the BVIPA again bumped the date, saying government wasn’t equipped to monitor both the Covid-19 vaccination rollout and the sea border reopening, which therefore was pushed back to April 15. If the April 15 deadline is met, it will see the territory reopening to ferry traffic only. The premier said that measures are being put in place to welcome private vessels, but no specifics were announced at the time.

In the meantime, some businesses say they can’t wait much longer.

“I think there were a lot of people optimistic the first and second time,” BVI Chamber of Commerce and Hotel Association Executive Director Keiyia Jackson-George said after the last delay. “Cancellations are still happening, and people are just deciding to go elsewhere.”

The struggling marine industry did get a boost on Friday when Mr. Fahie announced an extended 50 percent reduction of licence fees for commercial recreational vessels for the 2020 to 2021 season, and the licensing year Nov. 1, 2020 to Oct. 31, 2021.