It takes Arona Forbes roughly three months to grow the plants and herbs that bring flavour to her hot pepper sauce. It takes only ten minutes for her to blend …

END_OF_DOCUMENT_TOKEN_TO_BE_REPLACED 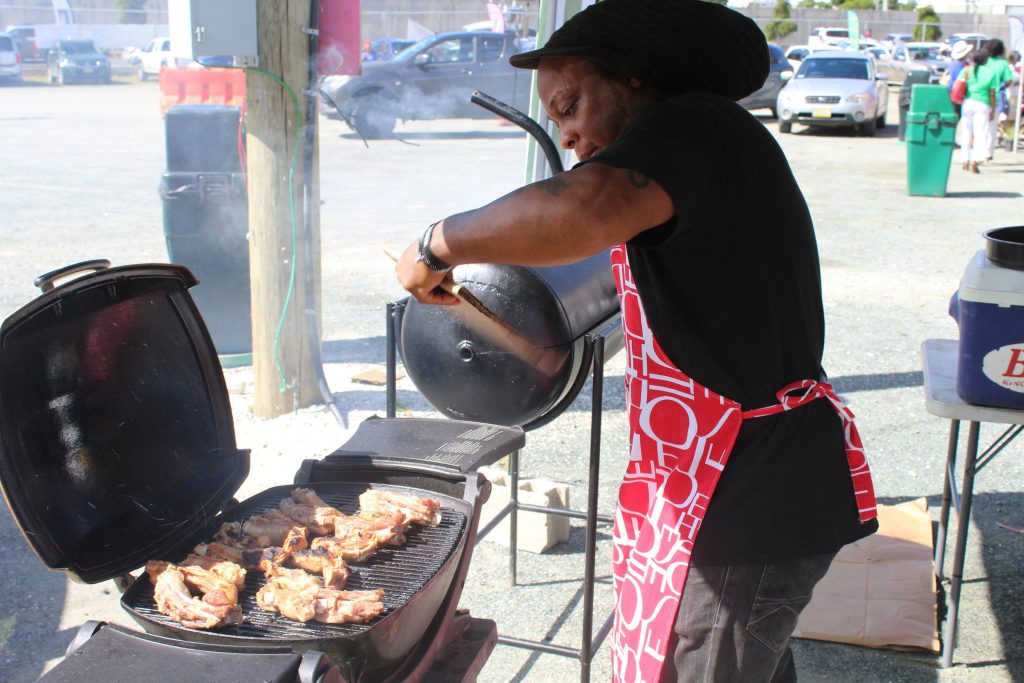 A chef fans the flames from meat sizzling on his grill. (Photo: JOEY WALDINGER)

It takes Arona Forbes roughly three months to grow the plants and herbs that bring flavour to her hot pepper sauce.

It takes only ten minutes for her to blend them all together, she said.

Ms. Forbes’ recipe, which calls for her to mash up the peppers before mixing them with vinegar, was handed down to her from her mother, she said.

Standing in front of a colourful tent where she sold the sauce and other products ranging from honey to coconut oil, Ms. Forbes said it is important to keep such traditions alive.

“I want to pass the culture onto the next generation,” she said.

Ms. Forbes was one of many vendors who set up shop Friday at the Road Town Festival Village Grounds for the Grand Food Fair, a marquee installment in the Culture Week celebrations.

At the event, queues formed in front of chefs serving regional mainstays such as barbecued chicken and fish and fungi.

Meanwhile, farmers sold wares from fresh fruits to rare herbs, and schoolchildren ran around the grounds with their teachers in tow.

Thanks to the central Road Town location, many of the adult attendees were able to stop by during their lunch break, including Ebony Corea, who was accompanied by her husband and some friends.

“With this, everyone can be a part of what’s going on,” she said, referring to the location.

Shonda Leacock, who works nearby, had a specific plan for the fair. Rather than feast on one big meal, Ms. Leacock preferred to wander the grounds, collecting small appetizers, fruits and drinks at various stalls.

“I like to get treats like this,” Ms. Leacock said, holding a plate of potato salad and a bag of gooseberries.

Coming towards the end of Culture Week, the fair was not the only event that Ms. Leacock attended.

Last Thursday, she accompanied her daughter to Joyce Samuel Primary School, one of the many schools across the territory that held special events to honour the territory’s heritage last week.

Decked out in traditional garb, children participated in cultural activities from dances to storytelling, Ms. Leacock said, adding that they were also treated to plenty of food.

Children were not the only ones who sported traditional fashions during the weeklong festivities. Athena Maduro, who works in the Department of Culture, noted that the day of the food fair, offices were filled with employees wearing traditional garments.

Ms. Maduro took this as a sign that as Culture Week grows older — this was the event’s 25th anniversary — more people are becoming involved.

“We don’t want our culture to be lost,” she said, adding, “It needs to be highlighted.”

This year, organisers chose to move the food fair — which has traditionally been the week’s biggest draw — to the Festival Village Grounds largely to encourage more people to attend, Ms. Maduro said.

Looking to continue this trend of increased participation, event organisers are considering holding next year’s celebration at a different time, Ms. Maduro said.

Culture Week has in the past been held during the first week of November because this has been most convenient for the territory’s schools.

But as the month becomes increasingly stacked with other popular events, such as the BVI Food Fete, organisers want to ensure that Culture Week activities receive the attention they deserve, Ms. Maduro said.

Anne Leonard, deputy director of the Department of Culture, added, “To me, Culture Week should be every week.”