The Virgin Islands confirmed another case of Covid-19 on Tuesday as the territory continued to ease the restrictions that have shuttered the economy, expanding the list of businesses allowed to …

END_OF_DOCUMENT_TOKEN_TO_BE_REPLACED 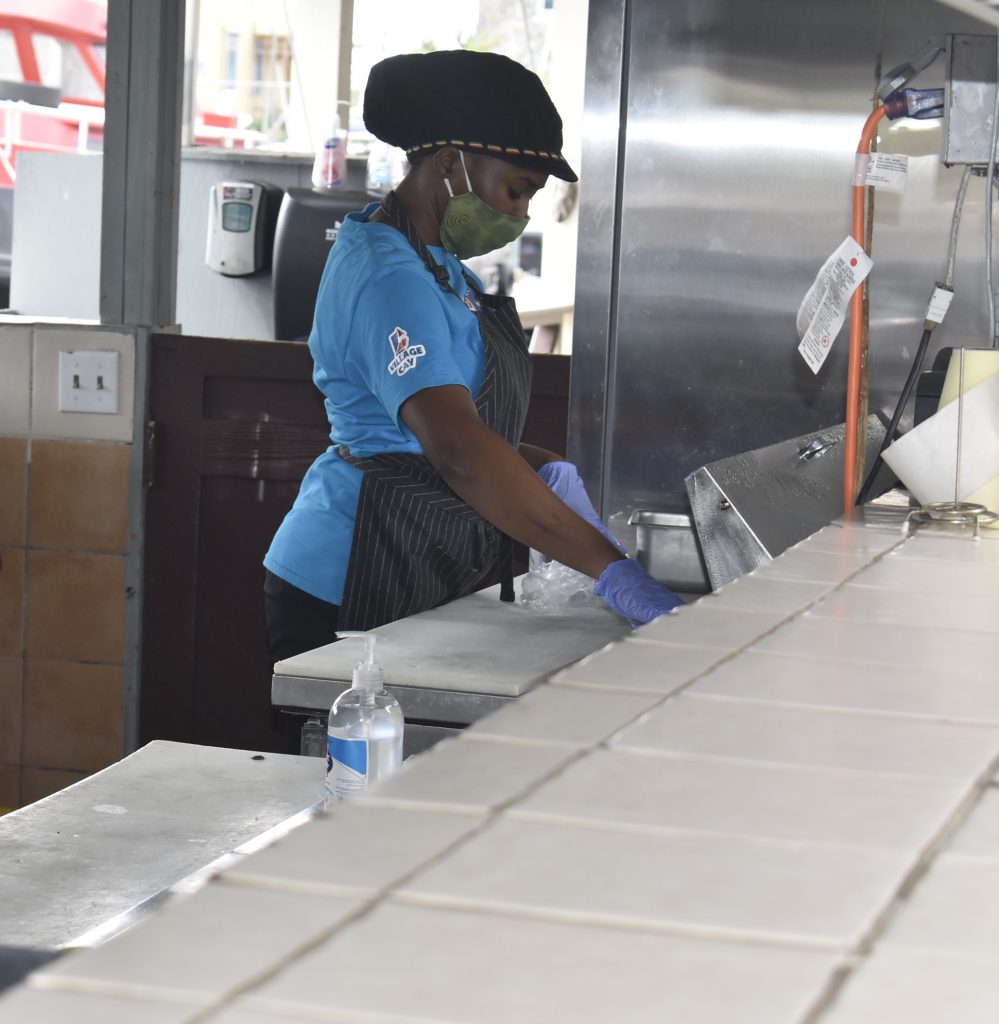 Although the patio at Village Cay was mostly empty Tuesday morning, a food worker readies for takeout and delivery orders. Restaurants were allowed to provide such services as the lockdown eased up another notch. (Photo: JOEY WALDINGER)

The Virgin Islands confirmed another case of Covid-19 on Tuesday as the territory continued to ease the restrictions that have shuttered the economy, expanding the list of businesses allowed to open and preparing to reduce the curfew hours.

On Tuesday morning, as restaurant workers prepared their kitchens for takeaway and delivery orders and people continued to line up in front of banks and grocery stores, Deputy Premier Carvin Malone announced that in the past week 21 samples had been sent to the Caribbean Public Health Agency to be tested, with one of them coming back positive.

This newest result brings the territory’s total number of positive cases to seven, with three active cases, three confirmed recoveries, and one death, said Mr. Malone, who is also the minister of health and social development.

One hundred and thirty-two residents have been tested, and 13 are currently under quarantine, the minister added.

“It is safe to say that the Ministry of Health’s case finding, contact tracing, monitoring and quarantine efforts are achieving the intended result of reducing your risk of exposure to active cases of Covid-19,” Mr. Malone said.

For reasons that weren’t explained, the seventh case was tested twice. The first time, the results came back negative, Mr. Malone said.

The individual was later “re-tested in accordance with established protocols” after being quarantined for the duration of the disease’s incubation period, the minister explained.

“It is common that in the early stages of infection the virus that causes Covid-19 could go undetected,” Mr. Malone said, adding, “This patient has exhibited only mild symptoms and will be kept in isolation.”

He did not provide further details.

These results were disclosed shortly after Premier Andrew Fahie announced Tuesday morning that government is preparing to scale back the curfew, which is currently in place from 1 p.m. to 6 a.m.

On Monday, Cabinet voted to change the curfew hours from 7 p.m. to 6 a.m. starting Sunday, an arrangement that is expected to remain in place for at least two weeks after taking effect, Mr. Fahie said Tuesday morning during a Facebook broadcast for the contract signing for Virgin Gorda’s North Sound Administration Building.

“Our decision as Cabinet ministers and government is hinged on aggressive contact tracing … to identify and address every possible risk,” Mr. Fahie said.

The premier cautioned that even though restrictions are beginning to lift, residents must remain vigilant in practising social distancing, wearing face masks, washing their hands, and sanitising surfaces.

Much of the public service also reopened on Monday, though many services continue to be offered remotely.

For Troy Blenman, the head chef at Tandoor, a restaurant in Mill Mall, restarting the kitchen has been difficult when he only has seven hours a day, he said Tuesday morning.

Though some customers had stopped in the restaurant Monday and Tuesday, he is looking forward to when he can open for longer periods, he said.

“It’s a challenge, but you try to work around it,” he added.

For the first time since the lockdown took effect on March 27, Tandoor opened for business on Monday, though there was some confusion regarding whether it could open earlier, Mr. Blenman said.

On April 28, a new curfew order posted in the government’s Gazette established that several types of businesses that previously had been closed during business hours could now reopen, including veterinary practices, churches, and restaurants for take-away or delivery.

According to the Gazette, these changes were to take effect the next day.

Last Thursday night, Mr. Blenman saw a post online that indicated these changes, and prepared to open the following day.

But as he was readying to welcome customers on Friday, he learned that the restaurant still had to be inspected and he would have to wait until Monday to reopen.

With the pandemic not likely to let up anytime soon in the Caribbean — Mr. Malone reported on Tuesday that the region has logged 13,693 confirmed cases of Covid-19 and 634 related deaths — regional leaders must develop testing strategies based on the situations in their respective countries, said Dr. Sylvain Aldighieri, deputy director of the Pan American Health Organisation Health Emergencies Department.

“You have to consider that we are facing a mosaic of different [types] of transmission,” Dr. Aldighieri said during a virtual press conference Tuesday.

He added that few Caribbean nations are reporting community transmission, with most reporting clusters or sporadic cases of the disease.

The VI’s transmission of Covid-19 is currently classified as “sporadic,” which means that one or more cases in the territory has been imported or locally detected, according to a Tuesday press release from the Ministry of Health and Social Development.

“The national authorities will define which testing strategy they would use,” Dr. Aldighieri said.

Any reduction of social distancing should be gradual, with governments waiting at least two weeks after easing a set of restrictions before loosening them further, said Dr. Etienne, who added that governments must be prepared to reinstate such measures if cases surge.

But before any government decides to scale back restrictions, it must ask itself a tough question, she added.

“We’ll have to decide … what is the mortality that you are willing to accept, and what is the economic negative impact you will accept,” Dr. Etienne said, adding, “That’s the ultimate balance that must be arrived at by governments in consultation with their population.”