Following the death of a 52-year-old Filipino woman suspected to have Covid-19, government has extended the round-the-clock lockdown an additional six days to allow for “aggressive contact tracing,” Premier Andrew …

END_OF_DOCUMENT_TOKEN_TO_BE_REPLACED 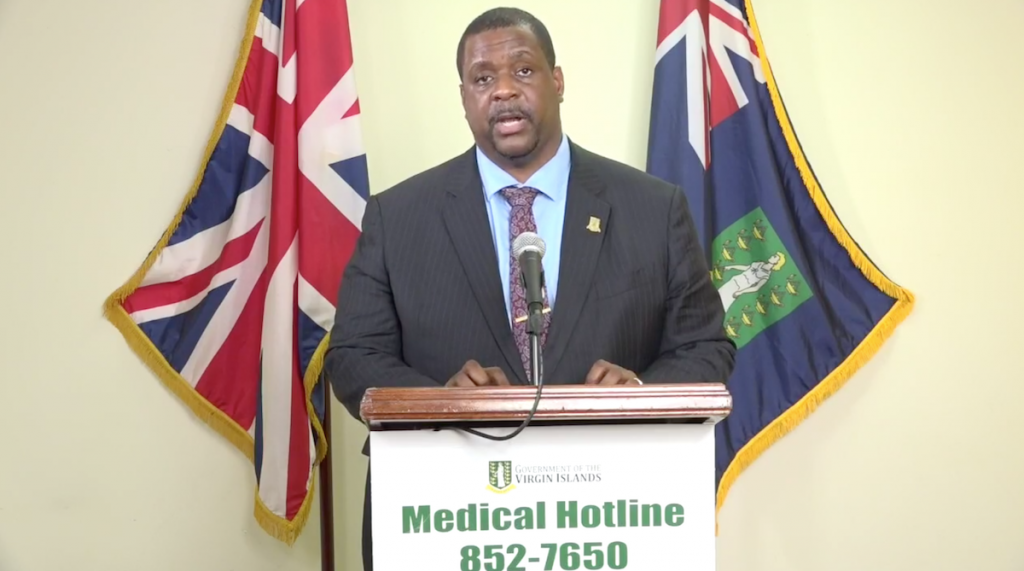 Shortly before midnight on Saturday, Premier Andrew Fahie announced that government has extended the curfew for a week to continue contact tracing in light of the territory’s first death suspected to be related to Covid-19. (Photo: GIS)

Following the death of a 52-year-old Filipino woman suspected to have Covid-19, government has extended the round-the-clock lockdown an additional six days to allow for “aggressive contact tracing,” Premier Andrew Fahie said during a live-streamed announcement that started shortly before midnight on Saturday night and continued into Sunday morning.

During this curfew extension, which will begin today and last at least until Saturday, April 25, certain businesses will operate in limited capacities, but residents who aren’t essential workers will be required to stay home and obtain food and other needed supplies through delivery services, Mr. Fahie said.

Gas stations will serve only essential workers, while pharmacies, grocery stores, and water delivery services will be open for residential deliveries, the premier added.

Government will also provide free food deliveries to vulnerable residents in every district, though officials are still finalising the details and will provide further updates Sunday, Mr. Fahie said.

“No one under my watch, as the premier and minister of finance, will go hungry during the extended curfew,” Mr. Fahie said.

Shortly after the announcement, however, several residents took to social media to ask for help obtaining food and other supplies.

The apartment complex where the deceased woman formerly resided has been quarantined, though in order to complete tracing efforts officials are seeking to track down residents who have since left the complex, Deputy Premier Carvin Malone said during a separate announcement earlier in the day.

On Friday, the Regional Security System transported 24 additional samples to the Caribbean Public Health Agency in Trinidad to be tested, said Mr. Malone, who is also minister of health and social development.

Mr. Fahie did not mention the results of these tests during Saturday night’s announcement.

“This despicable behaviour does not in any way represent the views of the people of the British Virgin Islands,” said Mr. Jaspert, who added that some instances of such conduct might be illegal and will be investigated by police.

This death, and the announcement that residents will have to endure another week under curfew, came just as many business owners were readying to reopen their stores: A “soft-curfew” allowing internal commerce during the day originally had been scheduled to take effect Monday.

“I know it is unwelcome,” Mr. Jaspert said in reference to the extended curfew. “However, we must continue to put safety above all else.”