With just five new cases of Covid-19 announced over the past week, Cabinet decided to issue a relaxed curfew order that took effect yesterday, allowing most businesses to open and …

END_OF_DOCUMENT_TOKEN_TO_BE_REPLACED 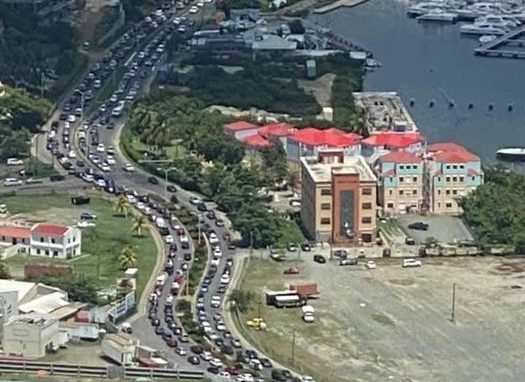 Once the 1 p.m. curfew approached, cars slowed to a crawl along Waterfront Drive and Sir Francis Drake Highway. The curfew has now been relaxed, and residents can leave home from 5 a.m. to 5 p.m. (Photo: FACEBOOK)

With just five new cases of Covid-19 announced over the past week, Cabinet decided to issue a relaxed curfew order that took effect yesterday, allowing most businesses to open and residents to leave their homes between 5 a.m. and 5 p.m. daily for the next two weeks.

“Our law enforcement officials reported that the vast majority of residents have heeded the call to do your part to reduce the spread of Covid-19 in our communities,” Health and Social Development Minister Carvin Malone said yesterday in a live statement on Facebook. “I say a heartfelt ‘thank you.’”

During the broadcast, he explained the new curfew order in more detail and provided information about active cases and testing numbers.

“We are able to report that 40 patients have now been fully recovered. The active number of persons that have now been diagnosed with Covid-19 stands at 28, and one person has died,” he said. “The number of confirmed cases in the territory now stands at 69. Sixty-four were from Tortola and five on the island of Anegada.”

He added that none of the recovered or active confirmed cases are severely ill. Seven of the patients were under 10 years old, three were between 10 and 20, and three were over the age of 60.

Under the new curfew order, most businesses are allowed to open between 5 a.m. and 5 p.m., but others are under tighter restrictions.

Meanwhile, spas, salons, hairdressers, barbershops, and restaurants for dining-in are allowed to open only after passing inspection.

Mr. Malone also stated that under the new curfew order, domestic travel via airplane services is permitted to resume and residents can stay on the beach from 5 a.m. to 5 p.m. Ferry services remain restricted unless approved by the governor.

The previous restrictions were gradually relaxed over the past week as most Covid-19 tests returned negative.

He said he wanted to “reassure [everyone that] no stone is left unturned” in contact tracing and identifying active cases. As of that day, 4,000 people had been tested at the Dr. Orlando Smith Hospital, he said.

Mr. Malone didn’t specify at the time how many more people had been tested since his previous update three days earlier, but he said that in recent days health teams had been able to “quarantine, monitor and test hundreds of primary and secondary contacts of persons who recently tested positive for the coronavirus.”

The minister confirmed one new case that day.

“The most recent person to test positive was a young child associated with a previously detected case, and we pray for their full and speedy recovery,” he added. “Of the previously reported 64 cases, there now remains 33 active cases, 30 recoveries, and one death.”

Mr. Malone also stated that day that “given these positive developments, Cabinet [would] be meeting on Friday [to] consider policy decisions to further guide the way forward.”

On Friday, he said that 34 more people had been tested, and two more positive results were confirmed.

That brought the total number of confirmed cases in the territory to 66.

A new curfew order was issued on Saturday, relaxing previous restrictions by allowing all businesses to open from 5 a.m. to 1 p.m. except for salons, hairdressers, barbershops, restaurants for dine-in services, bars, nightclubs and pubs.

After the Saturday order took effect on Monday, a long line of traffic formed in Road Town just past noon. Part of the congestion was due to roadwork, but primarily it appeared to be because of the rush to get home before curfew began at 1 p.m.

“This is the mayhem we had to get through,” Ian Clark posted on Facebook alongside a photograph of the pileup seen from above Road Town.

John Black also took to thesocial media site to say, “It’s 1:01 p.m. and the traffic has been stuck for over an hour.”

Yesterday’s curfew order, however, replaced the Saturday order, eliminating the 1 p.m. deadline and allowing residents to remain outside their homes until 5 p.m.