While streets were otherwise quiet in Road Town on Friday, government took the opportunity to run a simulation of a proposed new traffic system that officials hope could ease congestion …

END_OF_DOCUMENT_TOKEN_TO_BE_REPLACED 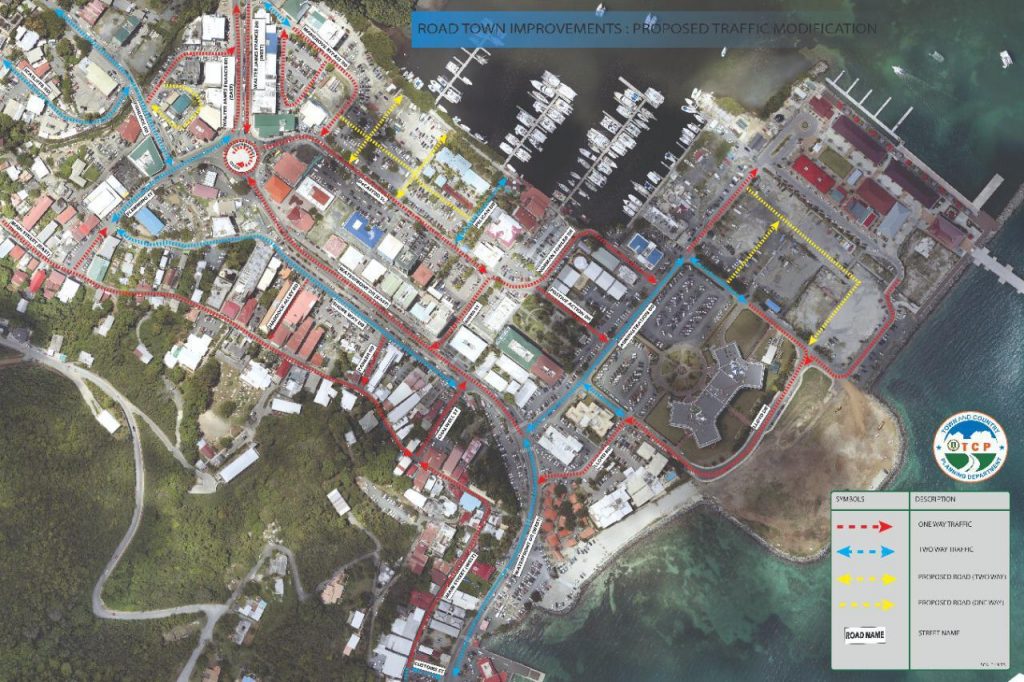 The Ministry of Transportation, Works and Utilities recently explored plans for rerouting several main roadways in Road Town by conducting a simulation on Friday. (Illustration: PROVIDED)

While streets were otherwise quiet in Road Town on Friday, government took the opportunity to run a simulation of a proposed new traffic system that officials hope could ease congestion in the downtown area.

One of the biggest proposed changes is converting Waterfront Drive and DeCastro Street into one-way roads going in opposite directions.

Transportation, Works and Utilities Minister Kye Rymer said the new routes are meant to make traffic flow better in typically congested areas in Road Town. Though no official changes have been made yet, the minister said the Friday exercise was an important test to figure out how easily residents could shift to a new way of driving around town.

Residents could virtually ride along on Friday for a drive down the new routes while the minister broadcast the simulation live on Facebook.

To give a picture of what it would look like to have a normal level of traffic, participants in more than 100 vehicles drove around town after the 1 p.m. curfew. They split up into five groups that made their way around the course while engineers watched. The Royal Virgin Islands Police Force helped make sure drivers made the correct turns.

Of particular interest is Waterfront Drive, Mr. Rymer said, explaining that the road serves an important role as the primary roadway through the downtown business corridor, a link between western and eastern Tortola, and the main way to get to an active port of entry, several schools, and recreational facilities.

“This level of activity, unfortunately, has led to traffic congestion in the heart of Road Town and can be at best ‘slow and go’ movement during the peak periods,” Mr. Rymer said. “The level of congestion has increased especially during days of high cruise ship activities, adding to the frustration of motorists.”

Plans for the new route are based on the Public Works Department’s studies conducted during the past decade, according to the minister. The studies, he explained, showed that too much traffic is getting stuck in town during rush hours, and it will only get worse if the population continues to grow.

“Simply put, traffic operations have been degrading and we expect will continue to degrade unless something is done,” he said.

Though measures like installing traffic lights and making two lanes for traffic approaching the roundabout have helped, Mr. Rymer said, more needs to be done.

The minister explained that it wouldn’t be practical to add more lanes to existing roads because of limited space in Road Town. But, he added, rerouting traffic on existing roadways could help.

The ministry is considering other steps to help with downtown congestion as well. They include paid parking lots in Road Town; a new westbound lane from Admin Drive to Waterfront Drive; free parking for up to 270 vehicles at the Festival Village Grounds; and free shuttle services from the grounds to Road Town.

“This project requires minimal funding, and it will offer a non-destructive solution, meaning no significant alterations, if any, to the roads, Mr. Rymer said.