Customs and Immigration chiefs appear before Commission of Inquiry

Customs Commissioner Wade Smith and Chief Immigration Officer Ian Penn, the heads of the territory’s two biggest border enforcement agencies, sat before the Commission of Inquiry on June 23 and …

END_OF_DOCUMENT_TOKEN_TO_BE_REPLACED 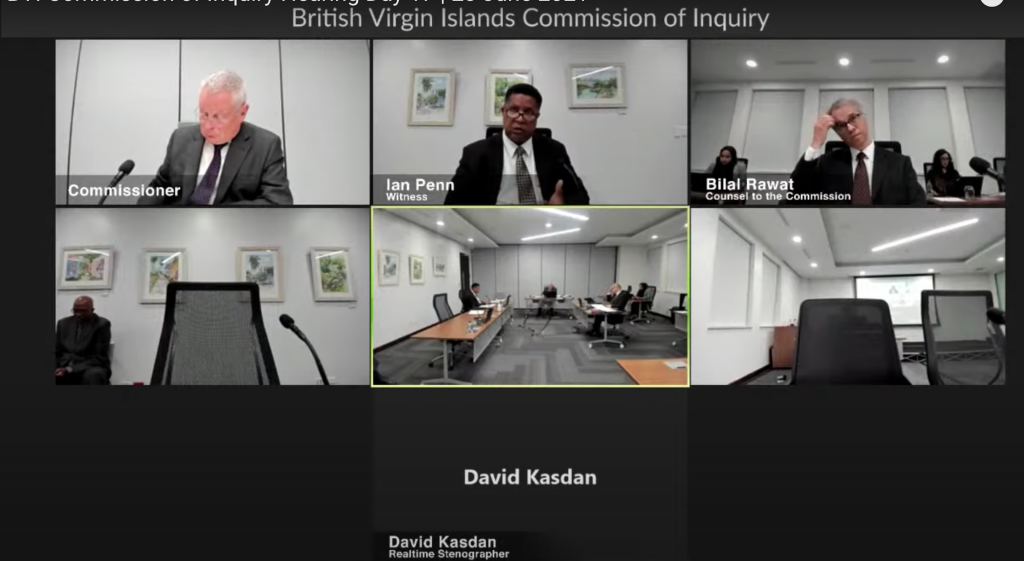 In his June 23 testimony before the Commission of Inquiry, Chief Immigration Officer Ian Penn said his department had investigated at least two complaints of abuse of power or other matters of dishonesty over the last three years, but neither investigation found anything incriminating. (Screenshot: COI)

Customs Commissioner Wade Smith and Chief Immigration Officer Ian Penn, the heads of the territory’s two biggest border enforcement agencies, sat before the Commission of Inquiry on June 23 and explained funding and staffing processes as well as how they investigate matters of suspected corruption, abuse or dishonesty within their ranks.

Explaining to COI Counsel Bilal Rawat how he obtains funding for the Immigration Department, Mr. Penn described a process similar to those explained by other law enforcement officials who testified earlier in the day.

According to Mr. Penn, he puts his budget proposal before the Standing Finance Committee every year, and “at that particular point in time that is used as an avenue for legislators to ask questions about the immigration procedures.”

Mr. Penn also talked about his role in leading internal investigations into suspicions of abuse of power or other dishonesty.

In the past three years, there have been two such investigations, Mr. Penn said.

Asked whether he needed to take action against any officers after the probes, he responded, “The outcome of the investigations did not in any way incriminate … anyone and therefore they were concluded.”

Asked by Mr. Rawat who within the Immigration Department conducts these investigations, Mr. Penn replied, “I believe in a chain of command.”

He added, “If it’s an officer at a port of entry, each port has a supervisor, and it starts with the supervisor.”

After the supervisor files a report, it is passed up the chain of command until it reaches Mr. Penn, he explained.

Mr. Penn then would have to decide whether to send the report “out of the department,” he explained.

If Mr. Penn becomes involved in an “external investigation,” he likely would request assistance from the police commissioner, he told Mr. Rawat.

Continuing with this line of questioning, Mr. Rawat asked Mr. Penn about an answer in his position statement in which he wrote that, in order to detect and investigate matters of corruption or dishonesty, the department has “layers [that] allow for checks and balances to take place at each level, thus resulting in the detection and investigation of any suspected wrongdoing.”

Mr. Rawat asked for details of those “checks and balances,” and Mr. Penn said he was referring to the “chain of command” he had mentioned earlier.

“When it comes up … that chain, … it means that every person in that chain would be able to check the supervisor below and make sure that everything is in place, all the right questions were asked, all stones were overturned,” Mr. Penn said.

Repeating a complaint ubiquitous among the two public officers who testified earlier in the day — Police Commissioner Mark Collins and Director of Public Prosecutions Tiffany Scatliffe-Esprit — Mr. Penn said one of his biggest challenges is limited staffing caused largely by budgetary constraints.

His department requires lots of staffers because there are many ports of entry in the VI and many administrative positions needed to properly monitor them, he said.

Currently, there are 56 immigration officers and six administrative employees working in the agency, Mr. Penn said.

Although there currently aren’t many vacancies in Mr. Penn’s department, the size of his complement has been at a virtual standstill for years, he said.

“The department is growing, the country is growing, and therefore we need more manpower to get things done efficiently,” Mr. Penn said.

“Once they’re in, and they carry on the job, do you actually ever periodically go back and check someone’s background, check if they have any associations … that could affect their abilities to be an immigration officer?” Mr. Rawat asked.

Asked about the Joint Task Force, Mr. Penn praised it.

Having heard the testimony from the police commissioner, who expressed concerns about the JTF’s effectiveness, Mr. Penn said, “I assume what he is probably getting at is … to have things more structured, to have more, you know, reporting mechanisms; to have more information on hand, and … have more recording of information.”

As a follow-up, COI Commissioner Sir Gary Hickinbottom asked what information exactly the JTF has that helps it manage migration in the territory.

Mr. Penn pointed to the territory’s new border management system, though he said he hopes to install an additional security system that will “have information on persons coming into the territory even before they arrive.”

When it was Mr. Smith’s turn to sit before the COI, Mr. Rawat started off by asking questions similar to those posed to the day’s previous witnesses, such as how Mr. Smith receives his yearly budget, how many staff members work in the department, and how his agency interacts with other law enforcement agencies in the territory.

There are approximately 82 customs officers, and between 15 and 20 administrative staff members, Mr. Smith said, adding that there are about 18 vacancies in the department.

Mr. Rawat also asked Mr. Smith about the Customs Department’s K-9 Unit, which he described as one of the most successful in the region.

“Since day one,” Mr. Smith said, the unit has consistently detected contraband that people attempt to bring through the sea and airports, and has assisted in some of the largest drug busts of other British overseas territories.

Officers in the K-9 Unit have also conducted training in other OTs and countries, and they helped establish the police force’s K-9 Unit, Mr. Smith added.

In his position statement, Mr. Smith wrote that the Customs Department’s internal audit and assurance unit, which reviews and investigates allegations or complaints against Customs officers or staff, is the primary tool for monitoring the effectiveness of the department.

During the testimony, Mr. Rawat asked if complaints against customs employees “first start off ” with the internal audit unit.

Mr. Smith responded in the affirmative.

In response to further questions from Mr. Rawat, Mr. Smith clarified that if a complaint first comes to him, he has discretion over whether or not to send it to the unit.

In his position statement, Mr. Smith added that if the unit “discovers evidence of corruption, fraud, irregularities, etc. being investigated, this is reported to the financial secretary, the Attorney General’s Chambers, and/or the director of public prosecutions, depending on the nature of the evidence discovered.”

Mr. Smith said that in recent years there have been “referrals” to the financial secretary, who in turn sends them to the Human Resources Department.

Asked how many such cases have been referred to the financial secretary and other officers in the past three years, Mr. Smith said there are a couple matters that “are under investigation now.”

These matters are ongoing, and Mr. Smith said they have been “discussed with the financial secretary … and we are waiting on the conclusion of the case by the Enforcement Unit.”