Business > D-5 to get ‘economic zone’

END_OF_DOCUMENT_TOKEN_TO_BE_REPLACED 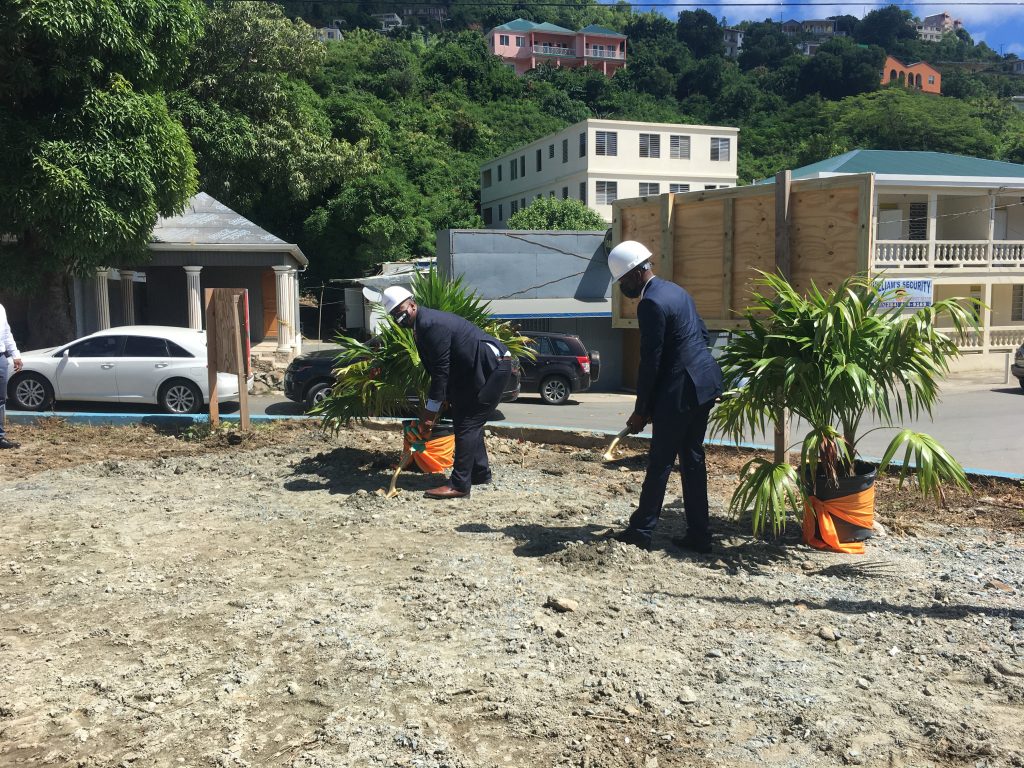 A piece of Huntums Ghut land originally intended to house a community centre will fulfill its original purpose and become a zone for Fifth District entrepreneurs to realise their visions when a new project comes to
completion, according to Transportation, Works and Utilities Minister Kye Rymer (R-D5).

“A community centre was envisioned, but based on the available funds at the time, a basketball court was formed,” he said during a groundbreaking ceremony on Monday morning at the Huntums Ghut site. “We are now
putting this vision into reality when the Fifth District Economic Zone vision meets reality.”

When complete, the project will include three commercial warehouses that will hold up to six businesses each, he said.

Applicants will have to develop a business plan in order to be selected and pay a small user fee for the upkeep of the facility.

The idea, he said, was borrowed from the concept of the demolished Palm Grove Shopping Centre in Road Town, where Virgin Islanders were “able to own their own businesses at a fraction of the market value and the market operating costs, offering commercial spaces with no overhead.”

Eventually, the hope is that entrepreneurs would move up and seek larger accommodation, “thus creating room and space for new entrepreneurs to move in,” he said.

Ultimately, he added, officials aim to create jobs and bolster economic activity for the people of the area.

“We are a very ambitious set of residents here in the Fifth District,”
he said.

However, he also impressed upon potential applicants that they should be “innovative and creative” with their business ideas.

“If everyone is in the same business, then it’s tougher to succeed,” he said. “You need to differentiate your business.”

The zone, he said, will also house a library and a food pantry.

“This would make available resources and food items for neighbours who have encountered hardship during these times,” he explained, adding,

“This first step programme for entrepreneurs is not a handout, but it’s a step up.”

Opposition member Mark Vanterpool (R-D4), who grew up in Huntums Ghut, said he remembered the site when it was home to a man who aggressively protected his mango trees.

On Monday, he made a commitment to its future, pledging to donate $5,000 to the food pantry and library. Deputy Speaker of the House Neville “Sheep” Smith (R-at large) and Health and Social Development Minister Carvin Malone (R-at large) also pledged donations of $5,000 or more.

Mr. Malone called attention to the progress that has been made in the district since Hurricane Irma in 2017.

“One would claim that the Huntums Ghut area must have been one of the hardest hit areas,” he said. “It was devastated. But look at it today. Buildings are going up. Economic zones have been planned and built.”

“Never let anybody tell you that your last name is why you’re not making it,” he said. “That is one of the most ludicrous things that I’ve ever heard in my entire life. The Lord said he would make your name great, not you.”

“We have young people who will become employees, but you have young people who will become employers, who believe that they have a dream or a vision, or some creative idea or some innovation, that they believe will bring change not only to the district, but to the territory at large,” said Sharie de Castro (R-at large), junior minister for tourism.

“Covid-19 has brought the idea of normalcy down to its bare minimum and left us out to dry,” she said. “The global economy is devastated. … But whenever you feel the walls narrowing in and despair raises its head, find a young person. Their passion is our light; their resolve is our hope; their tenacity shall be our redemption.”