Flames lit up Road Town on Saturday evening as the annual Cultural Extravaganza closed with a bonfire at the Festival Village Grounds. Residents from across the territory gathered throughout the …

END_OF_DOCUMENT_TOKEN_TO_BE_REPLACED 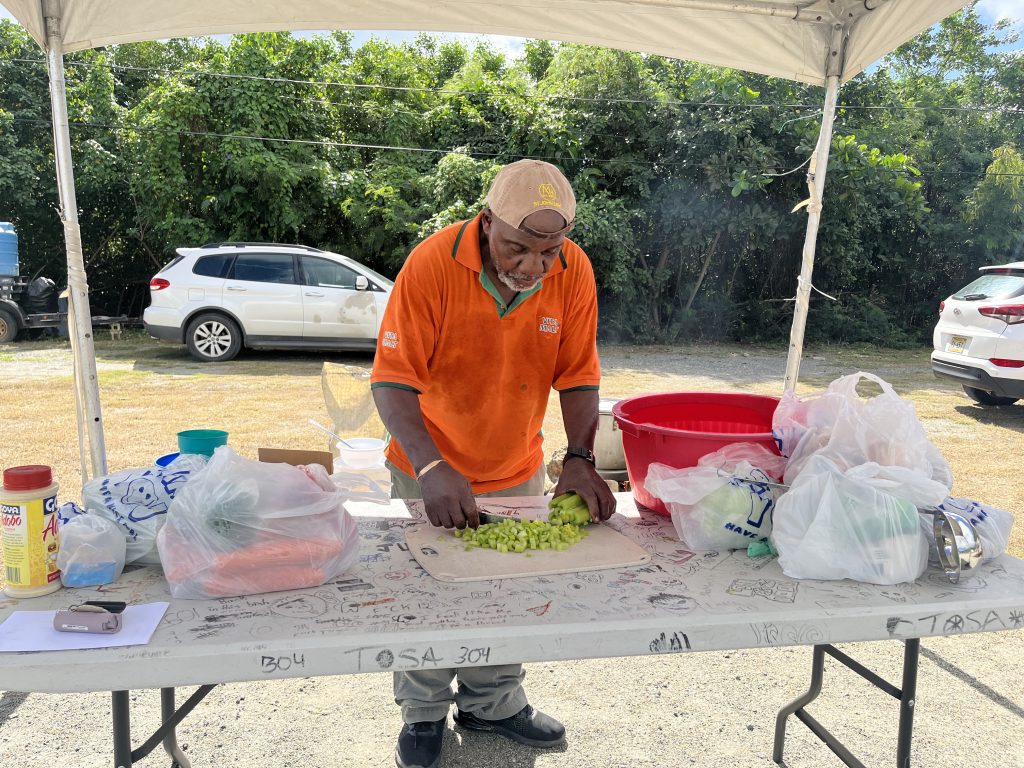 Traditional cooking demonstrations were among several activities featured during the Cultural Extravaganza on Saturday at the Festival Village Grounds. (Photo: ZARRIN TASNIM AHMED)

Flames lit up Road Town on Saturday evening as the annual Cultural Extravaganza closed with a bonfire at the Festival Village Grounds.

Residents from across the territory gathered throughout the day to take part in activities including traditional games, cooking demonstrations, dances, singing, skits and more.

“We started off this morning with a demonstration of cooking of mutton soup and fish soup, and some dumb bread. We’re going to start with the spoken word, then games with the students,” Virgin Islands Communal Association President Melissa Potter said at the beginning of the day. “We’ll have three-legged races, some tug-of-war, lime-and-spoon for anyone who comes. We’re going to have the competition ‘name that bush’ and a cultural section with questions about our culture. That will lead right into the evening with Sankey sing-out, storytelling and bonfire with dance.”

The event was hosted by the VICA, an organisation that aims to preserve the VI’s heritage and promote good governance within the territory, according to a presentation displayed at the event.

Vendors set up their tents as early as 7 a.m. that morning. For farmer Sayretta Pickering, the event was a chance to showcase the plants she grows.

“This is a cultural event, and that’s why I’m participating, because plants and herbs are part of our culture,” Ms. Pickering said. “Before there was medicine in the pharmacy, plants are what we used for medicine. We boiled the bush and made the tea. That’s what we used for healing. Bush is the real thing.”

She sold plants including chives, mint and rosemary.

“This one smells just like Vick’s and it helps with your throat if you have a cold,” she said of one of her herbs.

Next to her, there were cooking demonstrations of mutton soup. The mutton is traditionally cooked in a pot over a wood fire, Ms. Potter explained.

Nearby, residents cooked soup made with local fish.

As the evening rolled in, more festivities like Sankey singing and traditional dances began.

“The Sankey was the book that was used for most of the services except for Sunday morning, so we heard Sankey from Sunday night all the way through Sunday morning,” she said. “Nowadays, when we sing Sankey songs we seem to focus on the rhythm and how you can move, but back then the focus was on the message in the songs.”

She went on to explain the powerful effect Sankey singing could have on the community.

“When the message in the song struck a note or a chord and vibrated in the hearts of those older people, let me tell you: The spirit would call and they would shout in every way,” she said. “Those older folks could not contain themselves when those songs touched their hearts. They moved. They got happy.”

During the next hour, while Sankey singing continued, a bonfire was lit a short distance from where the main events had been taken place.

The Cultural Extravaganza was a part of Culture and Tourism Month, which is scheduled to conclude with the Anegada Lobster Fest from Nov. 25-27.

Other activities are also slated for the coming days across the VI.