Dancing Under the Stars raises FSN a record $43k

A Government House that has been relatively quiet since Hurricane Irma was bumping with Latin rhythms on Friday night. Around 160 patrons gyrated at Dancing Under the Stars, an event …

END_OF_DOCUMENT_TOKEN_TO_BE_REPLACED 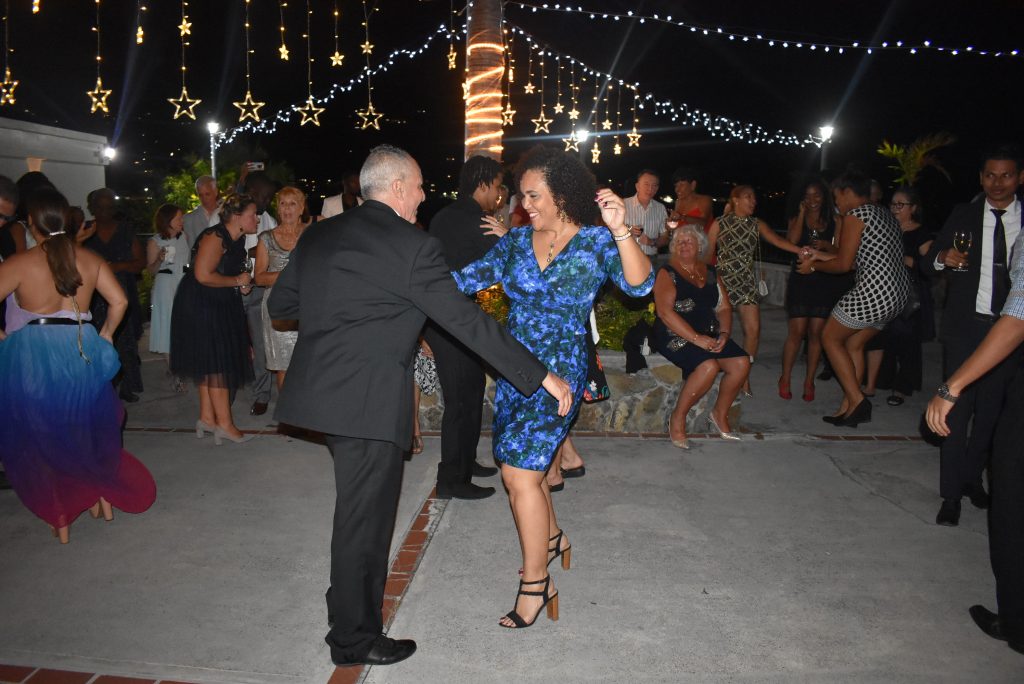 Salsa dancers led guests onto the floor at Government House as part of Dancing Under the Stars, a fundraiser for the Family Support Network. (Photo: CLAIRE SHEFCHIK)

A Government House that has been relatively quiet since Hurricane Irma was bumping with Latin rhythms on Friday night.

Around 160 patrons gyrated at Dancing Under the Stars, an event organised by the Tortola Ladies Club to raise money for the Family Support Network, which has been slammed since the 2017 hurricanes trying to feed, clothe and offer emotional support to hundreds of Virgin Islands residents.

“I think it’s essential to the Family Support Network, and to the Tortola Ladies Club: We knew it was time to do it again,” said TLC President Sharon Burrill, who described the event as the “most successful year ever” after it raised $33,000 with an additional $10,000 in pledges.

It was the first large-scale charity event to take place at the Government House since before the storms.

The event, which had its start as Dancing With the Stars six years ago, took a hiatus last year as TLC organisers regrouped in the wake of Irma.

However, normally Dancing Under the Stars alone raises at least $20,000. Since it didn’t happen last year, the TLC had to reach into its slush fund.

“Last year we did give almost that amount because right after the hurricane we were able to disburse around $12,000 to three different charities,” Ms. Burrill said.

FSN was one of those charities.

But after a year of stopgap measures, the club was eager to get back to regularly scheduled programming.

“We were happy this year to get back to doing this,” Ms. Burrill said. “I think that the island is ready to start celebrating again: going out and getting dressed up and doing all those sorts of things.”

Someone who wasn’t exactly cutting a rug was the host, Governor Gus Jaspert, who was in a leg brace recovering from a ski accident he endured over Christmas.

“I will not be terrorising the dance floor too much. I’ve been trying to work out what dances you can do on crutches,” he joked. “The lindy hop may be one of them.”

Though he wasn’t fully mobile, the governor was well enough to lead a toast to FSN, which he praised for doing “quite simply incredible work.”

Emcees Kareem Nelson Hull and Angelle Cameron later joked that they would auction off Mr. Jaspert’s crutches for charity.

Throughout the night various donors wrote their names on an oversized sign-in sheet to agree to cover one month’s rent for a family in need. Silent auction items donated by businesses and individuals included gift baskets from EC Soap Company, a trip to Mosquito Island, and a visit to Government House to play board games with the governor and his family.

Around 8 p.m., a troupe of salsa dancers arrived in an attempt to coax attendees out on the dance floor into a conga line that gradually merged into the electric slide, courtesy of DJ Push Pop.

Ms. Burrill mentioned that it was important to have Government House back as a place to hold fundraisers, noting that in the coming months it will play host to various events, including the fundraiser to rebuild the Old Government House Museum and the annual Virgin Islands Search and Rescue Gourmet Gathering.

Ms. Burrill noted that anything that brings people together for a good cause is music to her ears.

“One of the most important things for me is that it’s such a community event,” she said. “When I look at all the small businesses that donate to the raffles, we get such a good range of people. We never have people say no.”