Dawn Smith never predicted she would work in the House of Assembly as a lawyer, nor did she initially find the prospect very attractive, she said last Thursday when she …

END_OF_DOCUMENT_TOKEN_TO_BE_REPLACED 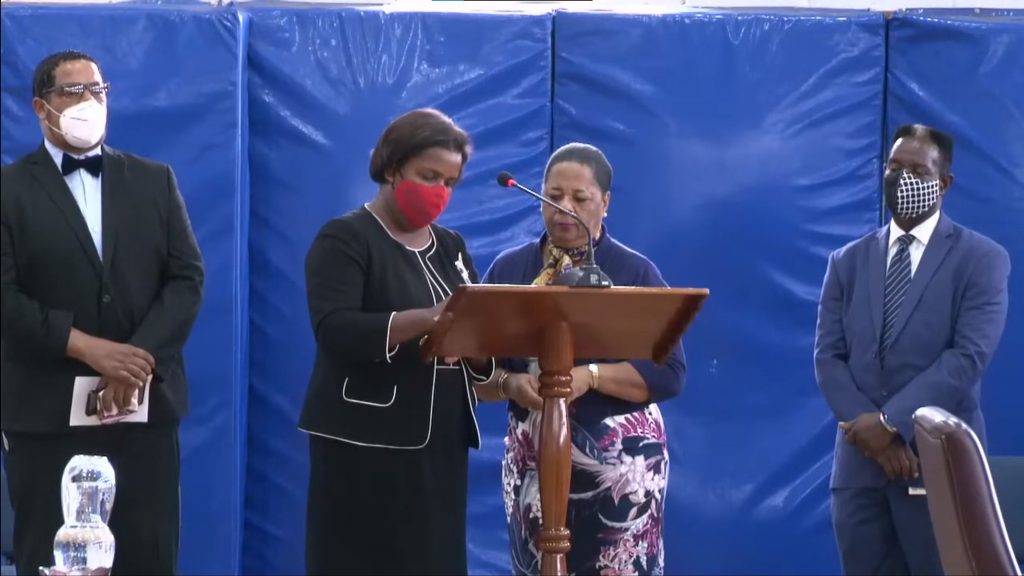 As the second Virgin Islander to serve in the role, Dawn Smith officially took up the mantle as the territory’s attorney general during a special sitting of the House of Assembly last Thursday. (Screenshot: HOUSE OF ASSEMBLY)

Dawn Smith never predicted she would work in the House of Assembly as a lawyer, nor did she initially find the prospect very attractive, she said last Thursday when she was sworn in as attorney general.

“The strength of support and good wishes following the rumours and announcement of my appointment has been sobering and cause for personal introspection,” Ms. Smith said, reflecting on her appointment as the second Virgin Islander in history to serve in the role. “We have to get our act together … and I hope that, during my tenure, whatever it is that creates such an unwillingness can be rectified and banished forever.”

HOA Clerk Phyllis Evans administered the oath of office during a special sitting of the House.

As House Speaker Julian Willock noted, Ms. Smith is the second attorney from the Virgin Islands to be appointed to the role in 21 years. Her appointment also marks a record four women currently acting as members of the 15-seat House, which besides the 13 elected members includes the speaker and attorney general.

Governor Gus Jaspert announced in May that Ms. Smith would be assuming the position. An attorney with more than two decades of experience, she joined the BVI Financial Services Commission as general counsel in 2013, and was part of the task force that helped establish the BVI International Arbitration Centre.

She succeeds Baba Aziz, who replaced Christopher Malcolm in 2015 with an initial three-year appointment. Mr. Aziz also briefly acted as attorney general in 2010.

As the principal legal advisor to government, Ms. Smith sits in both executive and legislative branches.

In her remarks at the swearing in, Ms. Smith thanked the public and government for their confidence in her ability to fulfil the role. She recounted her educational journey from East End Primary School to valedictorian of the BVI High School Class of 1988 and subsequent nine years of tertiary education.

“I tried my best throughout not to disappoint, and on completion of my studies I was happy to return home,” she said. “I have no regrets whatsoever that I did.”

From the early days of her career, she added, people from many walks of life propelled her forward.

“After being admitted to practise, I saw the kaleidoscope of life and law through property and bank transactions, wills and probate, admiralty, divorces, adoptions, debt collection, corporate work, litigation and whatever else came my way,” Ms. Smith said. “My seniors and contemporaries at the Bar would challenge me as an opponent yet remind me to notch every win in my desk, no matter how small.”

Ms. Smith acknowledged the significance of having a Virgin Islander assume the role of attorney general. She said the way was paved for this change based on a recommendation included in the 2007 Constitution — which is once again up for review — that the office be filled by a suitably qualified belonger.

“I have been blessed with prayers, warm congratulations and well-wishes from all over these islands and across the globe,” she said. “They use words like ‘hopeful,’ ‘happy,’ and ‘proud,’ and it is not lost on me that while being the attorney general is my responsibility, my being attorney general means many things to many people.”

In her new role, Ms. Smith said she looks forward to working with members in a candid and respectful manner to represent the people of the VI despite the challenges to the “normal working environment” presented in 2020.

She added that she would turn to the Governor’s Group to ensure the Attorney General Chambers are equipped and staffed to meet the legal needs of government to lead a “modern, progressive society.”

“I know in my role as speaker that we may not always agree,” he said. “However, I trust that we will avoid, while in my official capacity, where the attorney general is arguing against the speaker of the House in a court of law. At times I will exercise the right to obtain independent legal advice, but please do not ever see this as a method to undermine your wise counsel. Rather, it is only to supplement it.”

The speaker expressed hope that Ms. Smith would feel at home in the House in the company of some fellow members from East End and advised her that “long days, long nights and long debates” were ahead with an ambitious legislative agenda planned.

“You have your work cut out for you, but I too take comfort in knowing you are up to the task,” Mr. Willock said.

Mr. Aziz brought to the position 25 years of legal experience in the Eastern Caribbean Supreme Court and the Commonwealth of Africa, particularly Ghana and Gambia.

Government also shared a farewell video message for Mr. Aziz on Sept. 30, depicting the gifting of a portrait of Tortola taken by photographer Khari Adams.

“Your best days are not your yesterdays, but rather your tomorrows, because each day we live we can improve on what happened the day before,” Premier Andrew Fahie said in a virtual address, thanking Mr. Aziz for his work and wishing him well in his future endeavours.

Though not a belonger “in paperwork” as he put it, Mr. Aziz said his heart belongs here in the territory. He thanked the community for its acceptance and shared his gratitude for being able to serve in the position throughout the years.

“I will continue to support the BVI wherever I am,” Mr. Aziz said.