Sharleen DaBreo’s lifelong dedication to the field of disaster management began with, not surprisingly, a disaster: the 1979 eruption of the Soufrière volcano in St. Vincent. “I can still smell …

END_OF_DOCUMENT_TOKEN_TO_BE_REPLACED 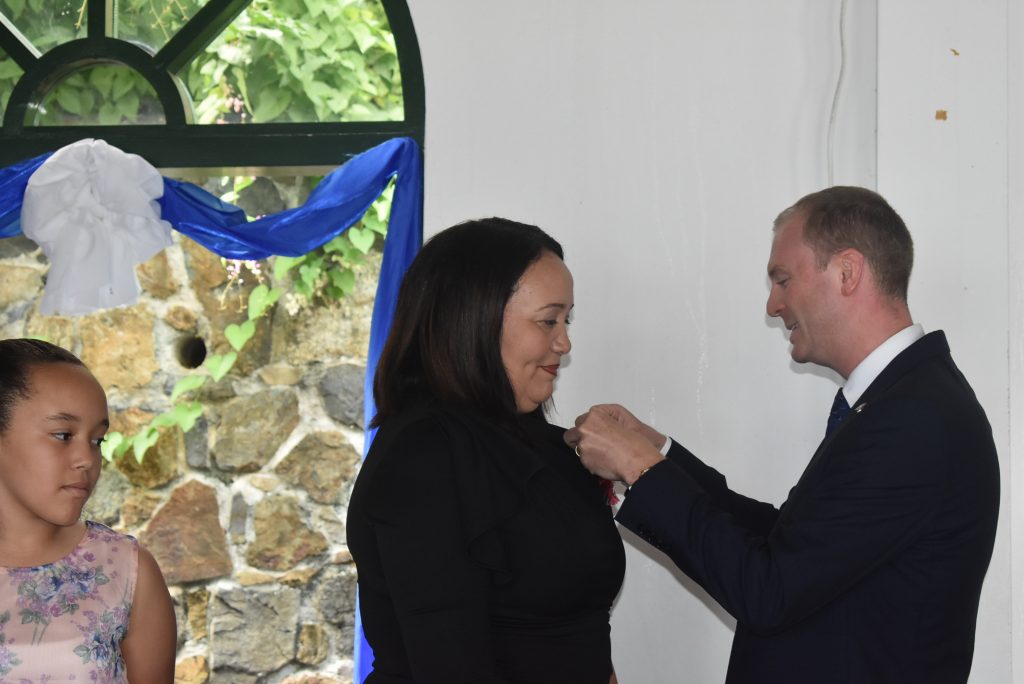 Governor Gus Jaspert awards the Member of the order of the British Empire to Sharleen DaBreo during a ceremony on Tuesday at Government House. (Photo: CLAIRE SHEFCHIK)

Sharleen DaBreo’s lifelong dedication to the field of disaster management began with, not surprisingly, a disaster: the 1979 eruption of the Soufrière volcano in St. Vincent.

“I can still smell the ash, hear the rocks falling on the galvanised roof of my grandparents’ home and remember the fear that gripped us all, not knowing what to expect,” she said during a ceremony Tuesday at Government House in which Governor Gus Jaspert awarded her a Member of the Order of the British Empire on behalf of Queen Elizabeth II.

During her remarks, Ms. DaBreo recalled that as they evacuated their home, she heard her grandparents discussing the plan they had put in place to protect the family. The experience would have a profound im- pact on her during her two decades at the Department of Disaster Management, where she started in 1994.

“In the 1990s, the frequency of hurricanes and the buzz of disaster preparedness sparked my curiosity,” she said. “It was never about the job or the paycheque; rather it was about giving back, of helping others, of being innovative and wanting to make a change.”

Last year, Hurricane Irma devastated the VI in what was the worst disaster the territory had seen in recent memory. The governor described how he got an early glimpse of Ms. DaBreo in action when she helped him navigate through the hurricanes mere weeks after his arrival in the territory.

“To have someone with her experience by my side was invaluable,” he said, adding that Ms. DaBreo set aside worries about her own family, including her 11-year-old daughter Skye, in order “to do all she could to protect people when we faced the toughest challenge ever.”

Mr. Jaspert described the MBE as an honour awarded for a significant achievement or outstanding service to the community, or to those who are outstanding at what they do and serve as an example to other people.
Ms. Dabreo, he said, exemplifies those qualities.

“Undoubtedly, … lives were saved” due to her preparation, he said.

Raised in the VI, Ms. Dabreo received degrees from Arkansas Tech University and Manchester Metropolitan University. She joined DDM in 1994, and acknowledged her debt to late former Deputy Governor Elton Georges for taking a chance by appointing her director.

“He was attentive and interested; always wanting to see others progress,” she said, adding, “This inspired me to be equally driven.”

Many warned her she would have to make sacrifices to succeed in her field, and she agreed.

“It became my life,” she said.

However, when her daughter Skye was born, “she was always the extra I travelled with,” she said. “With her I could continue to give my very best.”

Under Ms. DaBreo’s leadership of DDM, her achievements were many. In 2015, the VI became the first territory outside the United States and Canada to be awarded accreditation through the US-based Emergency Management Accreditation Programme.

Over the years, she has advised many organisations on disaster management, including the United Nations and the Pan American Health Organisation, as well as assisting other Caribbean nations. In 1995, she established the Disaster Auxiliary Corps, which was awarded the Caribbean Disaster Management Award in 2000.

In 2017, before the August floods arrived followed by two Category 5 hurricanes, Ms. DaBreo thought the storm season might be a little rougher than usual. But that was before the National Emergency Operations Centre was destroyed during Irma, leaving the director to devise a new plan.

“I prayed for our survival, and that we would have the support and be able to make the right decisions and give the right advice to get the territory back up and running after being knocked down twice in two months,” she said.

She recounted her stressful 77 days at the makeshift NEOC, with little food or sleep, rarely seeing her family and dealing with residents who lost everything.

“I thank God for the strength to play my role in leading the response,” she said.

However, with that behind her, she said her work is not finished. She is looking forward to seeing her legacy grow at the DDM, including the construction of the new state-of-the-art NEOC building, and the increasing collaboration of government agencies in turning disaster management into “a national development concern.”

She called being a public servant “a hard job,” but said it is one she is proud to do. “It has been a good 24-plus years,” she added.

Mr. Jaspert noted that the effects of Ms. DaBreo’s leadership have already been felt, and will continue to resonate.

During a slideshow of her career, the ceremony featured a
performance from Sonniel Pick- ering on saxophone. Arliene Penn, acting executive private secretary in the Governor’s Of- fice, played the territorial song on steel pan.

“Behind all this is the work that Sharleen has led with her team to make sure the BVI be- comes an increasingly resilient society,” the governor said. “Very few people get honoured knowing their life’s work has saved lives.”