Three barges ready to export thousands of tons of scrap metal and derelict cars have arrived in the Virgin Islands after at least five months of delays. The first barge …

END_OF_DOCUMENT_TOKEN_TO_BE_REPLACED 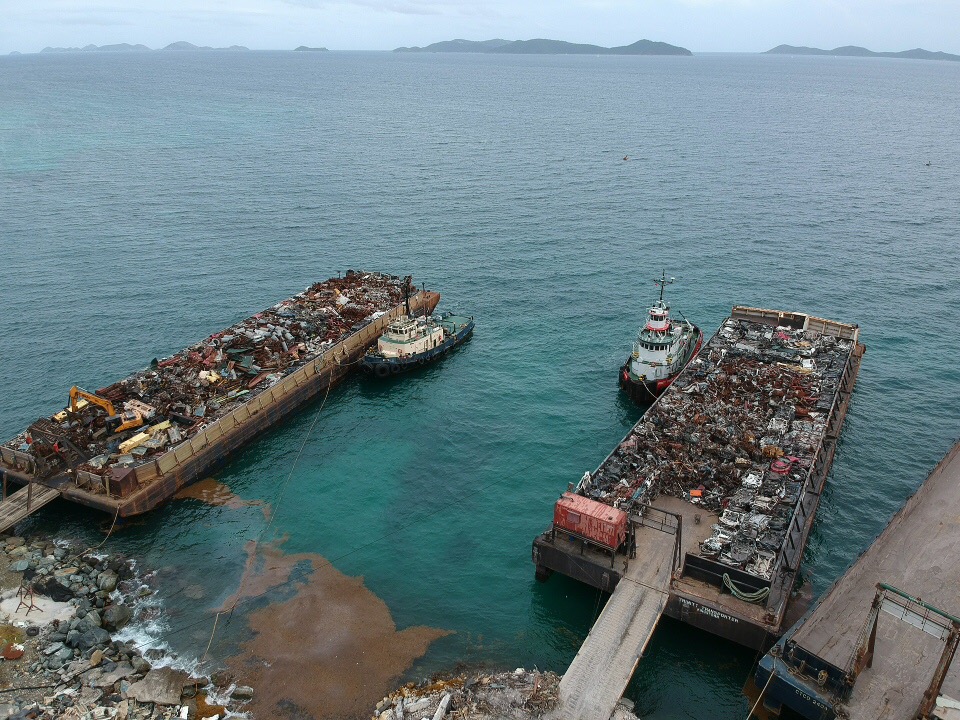 Three barges ready to export thousands of tons of scrap metal and derelict cars have arrived in the Virgin Islands after at least five months of delays.

The first barge arrived at the end of September and was followed by two more barges, government announced in a press release. Department of Waste Management Manager Greg Massicote said in the release that the first barge would “probably” be filled with about 4,500 tons of debris. That barge has since left the VI, the release stated.

Officials have not said who is organising or paying for the barges, or where the metal and vehicles are taken once they leave the island.

It’s also unclear how Kausina VI — the unregistered company selected by government last year to collect hurricane debris and process cars and heavy metals for export — fits into the equation, if at all.

This spring, Kausina launched what was intended to be a long-term waste project on Tortola, and officials within the company promised to bring a barge to Pockwood Pond and load it with metal.

But that first barge was never loaded because of a “contractual issue,” Kausina VI’s then-Operations Director Louis Espinal told the Beacon in April. Kausina was not mentioned in either press release issued by government about the barges this month, nor was any other company.

Since last year, there have been various setbacks with Kausina’s work in the territory, including the arrival of barges. In April, Mr. Espinal said he would not disclose the name of the other company involved in the initial barge dispute.

“I’m not gonna go there; I’ll leave that up to [Kausina founder and CEO Walter Parker],” he said during a phone interview. “I don’t get involved with the contractual part of the operation.”

Mr. Parker did not respond to a request for comment on that point, or to several other questions raised by the Beacon at that time, other than to say he would issue a press release. No answers to those questions have been provided by Mr. Parker in the five months since, and neither he nor his local partner Allen Wheatley immediately answered queries posed this week.

Partly because of the concern over the disputed contract, Mr. Espinal added in April, Kausina temporarily halted its operation in mid-February — about two weeks after it had started.

At the time, Kausina also struggled to pay some of the local labourers it had briefly enlisted to help clear hurricane debris from around Tortola, Mr. Espinal said. He explained that because the first barge-load of recyclables had not been sold, there wasn’t enough money up front for the two-week cleanup process.

“[Mr. Parker] took it upon himself to launch the operation to clean up the east side [of Tortola] because he felt within his heart that it was the right thing to do,” Mr. Espinal explained. “But that came to bite us because we didn’t have the funds to pay for those costs — labourers and machinery.”

Mr. Massicote said that although Kausina had originally confirmed a vessel would arrive on June 13, “unforeseen delays” meant the date of arrival would be pushed back. The DWM manager did not have further details about why the barge was delayed.

Finally, in late July, the Recovery and Development Agency took over a portion of the overall project, awarding 13 contracts to help clean certain areas of Tortola and Jost Van Dyke. Mr. Massicote admitted then that some of the work the RDA-approved contractors were doing originally fell under Kausina’s job description.

“They were supposed to be part of the collection [of hurricane debris] as well as deal with the exportation [of recyclables from the island], yes,” he said of the company.

The manager did not say why Kausina was no longer completing the first part of its initial agreement with government.
The firm has continued to process and bale metal in Coxheath, Mr. Massicote said at the time, but added that there have been setbacks in that part of the operation as well.

“I don’t think [Kausina employees] were there for the past couple weeks, but they were up there, or down there, since, I would say, maybe about three weeks ago,” he said in mid-August.

Asked if Kausina was collecting any debris from around the island, Mr. Massicote said, “At this point, these [RDA-approved] contractors are doing that.”

Despite a lack of official information from government, other companies seem to be involved with the current barge operation in Pockwood Pond.

One of the large vessels docked in the bay this week had the name of a website written in large letters across the side, apparently designating it as a barge from Trinity Industries, which operates out of Trinidad and Tobago.

James Francis, a heavy equipment operator at Tortola Concrete Ltd., also wrote on Facebook about the arduous process of loading the barges.

“Today was day 3 loading scrap metal and crushed vehicles out of Tortola,” he wrote on Sept. 29, while describing the long hours he was working.

Mr. Massicote said in the press release that his department has collected 12,000 tons of scrap metal and 3,000 derelict vehicles, including 54 from Jost Van Dyke, since November of last year.

The DWM will continue to collect dilapidated vehicles on Tortola until Oct. 20, the release reported, and the processing and eventual exportation of derelicts and metals on Virgin Gorda is scheduled to start this month.