About two hours after a fatal plane crash on Wednesday evening, salvagers began the tricky process of recovering the wrecked aircraft, a two-seat Cessna 150 that had sunk in about …

END_OF_DOCUMENT_TOKEN_TO_BE_REPLACED 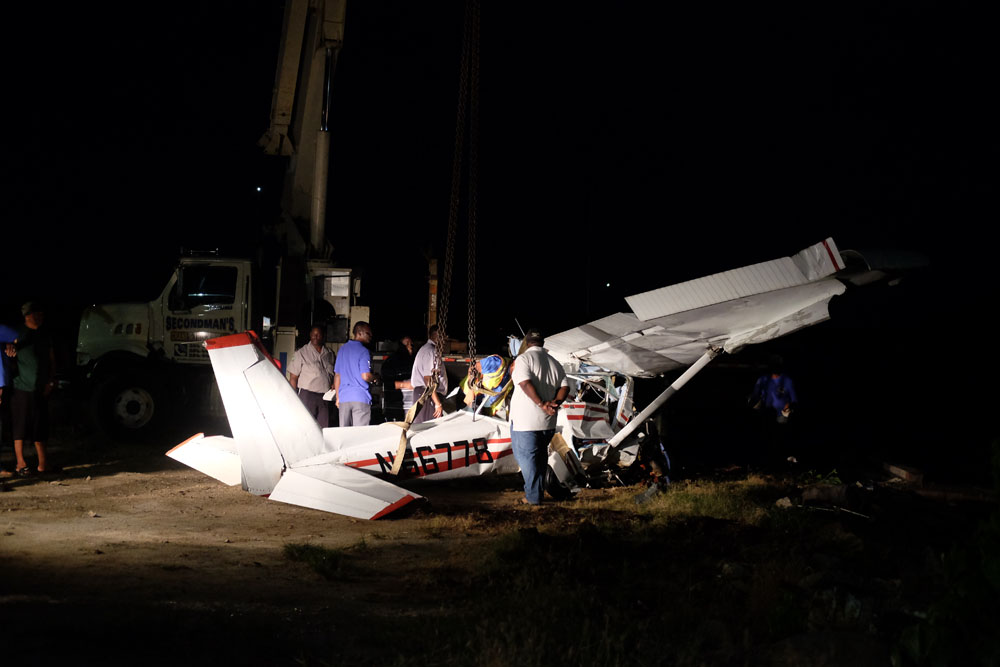 Salvagers haul a damaged plane out of the water after it crashed on Wednesday. (Photo: AMANDA ULRICH)

About two hours after a fatal plane crash on Wednesday evening, salvagers began the tricky process of recovering the wrecked aircraft, a two-seat Cessna 150 that had sunk in about 20 feet of water near Trellis Bay.

Husky Salvage & Towing and Secondman’s Crane & Trucking worked together to bring the plane to the surface using lift bags, before towing it to shore and finally hauling it up and out of the water with a large crane.

“We work under the instruction of the [BVI] Airports Authority and they wanted to get it out as quickly as possible,” said Kevin Rowlette, founder of Husky.

“There’s a lot of current out there, so there was concern about leaving it there because there are big winds and the current could actually move the plane. So they wanted to get it moved quickly.”

Mr. Rowlette said the smashed aircraft would likely be taken to the hanger at the airport.

“They [officials] weren’t quite sure where it was gonna go when I last heard,” he said.

Meanwhile, the airport had reopened at about 5:30 p.m. on Wednesday after an inspection revealed there was no damage to the runway or scattered debris, Deputy Premier Dr. Kedrick Pickering said in a statement.

Denniston Fraser, managing director of the Airports Authority, could not immediately be reached for comment about the incident.

The plane crash-landed into the water just off the runway of the Terrance B Lettsome International Airport around 4:17 p.m., officials said.

The pilot, who was the only person aboard at the time, was pulled from the wreckage and given CPR, but police confirmed his death at about 6 p.m.

Officials have not yet publicly identified the pilot, though police reportedly said information suggests he was an Angolan national with a United States passport.

Police initially reported that the plane had “overrun” the runway at the Beef Island airport and “ended up in the sea.”

Later, however, the BVIAA confirmed that the aircraft had departed the airport and then crashed into the water. Dr. Pickering added in a statement that the crash happened “immediately after take-off.”

The plane was destined for Pointe-à-Pitre International Airport in Guadeloupe, officials said.

The Crisis Intervention Team, led by psychologist Brenda Fahie, was deployed to provide counselling and psycho-social support to the victim’s loved ones, airport personnel and other rescue personnel who were “traumatised by the unfortunate event,” Dr. Pickering said.

The minister reported that the Air Accident Investigations Board in the United Kingdom has been notified of the incident. An investigation team from the BVIAA is also currently conducting investigations into the cause of the crash, alongside the Royal Virgin Islands Police Force, the minister said.

“My heartfelt condolences are extended to the families and friends of the pilot whose life was lost in the tragic accident,” Dr. Pickering added.