A cryptocurrency company that announced a partnership with government in May presented more details of its planned rollout of a digital currency in the Virgin Islands, to be known as …

END_OF_DOCUMENT_TOKEN_TO_BE_REPLACED 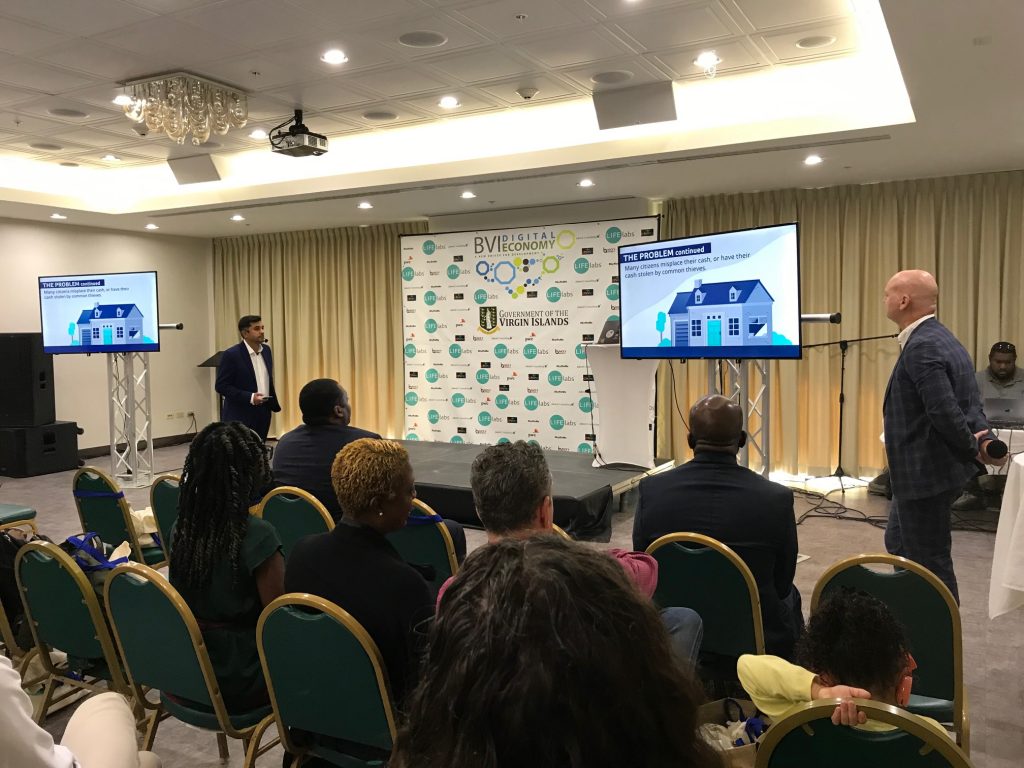 A cryptocurrency company that announced a partnership with government in May presented more details of its planned rollout of a digital currency in the Virgin Islands, to be known as BVI~LIFE, as part of a daylong BVI Digital Economy Symposium held Tuesday at Maria’s by the Sea.

“This partnership puts us in a unique position to make a massive impact in a place that really stands to benefit,” said Sanjay Jadhav, the CEO of the firm LIFElabs.io. “The foundation of a digital currency is necessary groundwork for the British Virgin Islands to continue to serve the global economy as it has in the past with the onset of the blockchain revolution.”

This week the firm issued a press release stating that the technology should “reduce transactional fees, increase transaction speed, and be accessible to BVIslanders and tourists alike.”

A video shown to the audience on Tuesday suggested that when the BVI~LIFE “ecosystem” is implemented throughout the territory, residents would be able to use the currency through either a “mobile wallet” in the form of a card similar to a debit card that uses cryptocurrencies managed by the app.

The transactions would be tracked at every step using blockchain technology, company representatives explained.

“You have instant access to your money,” the video explained. “You can instantly complete a transaction on your mobile device. [BVI~LIFE] makes it easy for businesses to get paid.”

The app also “allows you to track your income and expenses within the app and print financial records.”

Additionally, the LIFElabs representatives said they are developing a “rapid cash response” fund to offer aid in the event of a national emergency such as Hurricane Irma, which took out infrastructure including telecommunications and banks, making it impossible for many residents to access cash.

“LIFElabs’ RCR will enable the government to swiftly respond to future disasters, affording islanders unimpeded access to their funds, and thus mitigating the negative impact to their welfare,” the release stated.

Mr. Jadhav added that the company’s “rapid cash response engine builds connections that … allow the donors, individuals, NGOs, corporations and users to send donations directly to this RCR fund, which can then be distributed to the islanders and the project sponsors.”

Because the cryptocurrency makes use of blockchain, donations will be able to be tracked easily each step along the way.

“This makes donations transparent and audible,” he added.

Mr. Jadhav addressed the issue of the lack of telecommunications, a major hindrance after Irma.

“Should [a connection] not be there for even five to 10 minutes you can do an offline transaction,” he said.

In the press release, Premier Andrew Fahie called the firm “our partner.”

“LIFElabs, has demonstrated with their proven track record that their ideology is not just mere words, and we look forward to continuing our partnership with them on the rollout of BVI~LIFE, our digital currency,” he said.

Although the premier praised the firm in his statements, emcee Claude Skelton-Cline, a consultant for the government, stressed that the government “has not yet made any decisions” on any official deal with LIFElabs or any other financial technology firm, explaining the company is “out there doing what they do as a private entity.”

“But all of this falls under the ambit of our Premier’s Office and his government, and decisions will be sought and heard as they see fit,” Mr. Skel- ton-Cline said.

For now, Mr. Jadhav said his firm is working with the government and banks to roll out the technology in time for next year’s hurricane season.

In explaining how the app would be regulated, he said, “In backing the local currency one to one, it will be up to the local banks here to be a custodian [of the funds. We want to be] audited by an external body and we want the [Fi- nancial Services Commission] to be involved.”

One attendee raised a concern about how donations would be distributed in the event of a disaster.

“The short answer is there will need to be decisions made and that will be up to the people to decide how that money is distributed,” said Chief Market- ing Officer David Pugh-Jones.

He added that when it comes to the VI, LIFElabs is “here to stay” and that the firm is in the process of establishing a head office here.

“We’re looking at buildings now; we are on an accelerating growth path to have local employees from the islands that will be here,” he said.

The VI “has been tapped with a number of proposals that could potentially position [the territory] as a financial technology hub,” the premier said in his opening statements of the symposium. “Fintech is currently disrupting sectors with services such as mobile payments, money transfers, fundraising and [know-your-customer] compliance. … We welcome this innovative technological advancement with open arms.”