Nearly six months after then-Premier Andrew Fahie was arrested in Miami, new questions are arising about whether United Kingdom officials knew of the sting operation here that led to his …

END_OF_DOCUMENT_TOKEN_TO_BE_REPLACED 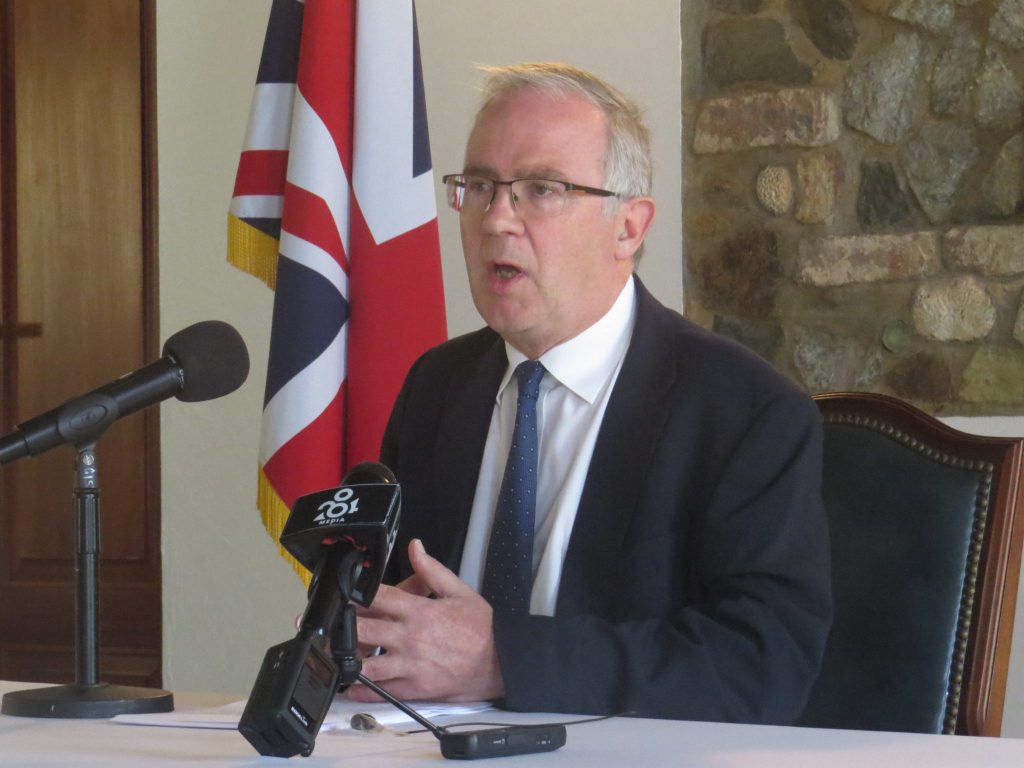 Questions have arisen about how much Governor John Rankin and other United Kingdom officials knew about the United States Drug Enforcement Administration-led sting that led to Premier Andrew Fahie’s arrest in April. (File photo: DANA KAMPA)

Nearly six months after then-Premier Andrew Fahie was arrested in Miami, new questions are arising about whether United Kingdom officials knew of the sting operation here that led to his arrest.

In a recent audio clip that the Governor’s Office apparently shared by accident with a UK media house, Governor John Rankin appears to say he is responsible for authorising United States Drug Enforcement Administration operations in the Virgin Islands, according to a podcast published by UK-based Tortoise Media on Sept. 26.

This would mean that Mr. Rankin should have been aware of the DEA-led sting operation conducted here in the months before Mr. Fahie’s arrest, during which a DEA source allegedly recorded meetings with Mr. Fahie in early April. However, in an interview with Tortoise Media shortly before his office sent the audio clip, Mr. Rankin stuck by his longstanding story that he had no prior knowledge of the arrest — a position he repeated on Oct. 5 to the Beacon.

The Tortoise Media report made much of the potential contradiction. “The islands [Mr. Fahie] left behind are bewildered,” Tortoise Media Deputy Editor Giles Whittell states in the podcast. “The government in London that still claims them in 2022 as a British overseas territory says it knew nothing at all about the American operation to arrest their leader until after it happened. Almost no one in the BVI believes that. They see, instead, a long-running experiment in post-colonial government — an experiment that went belly-up under the arm’s-length supervision of Britain’s last foreign secretary: its new prime minister, Liz Truss. Either she knew what was going on, or she didn’t. Neither scenario is what you might call a good look.”

Despite the UK’s denials, UK officials have acknowledged hearing allegations of VI leaders’ involvement in the drug trade long before Mr. Fahie’s arrest.

Last year in the Commission of Inquiry hearings, former governor Gus Jaspert said he decided to launch the COI in January 2021 in part because of allegations linking some of the “highest holders of office” to cocaine trafficking and other organised crime in the territory.

The Tortoise Media podcast also raised questions about how many United States officials were in the loop on the sting involving Mr. Fahie, and what responsibility they had to inform UK higher-ups.

Dick Gregory, a former lead prosecutor with the US Department of Justice in Miami, told the reporters that by current department rules a head of state cannot be prosecuted without the approval of the US attorney general. Mr. Gregory compared the VI case to the arrests of former Turks and Caicos Islands Chief Minister Norman Saunders in the 1980s and former military leader of Panama Manuel Noriega in the 1990s.

At that time, he said, he had a “certain amount of independence that I don’t think they’ll ever allow again” when it came to getting clearance from leaders in Washington DC to arrest political leaders.

However, the situation becomes more complicated when considering whether an OT leader is regarded as a “head of state” or whether that title falls to the UK monarch, he said.

Nevertheless, Mr. Gregory said current US Attorney General Merrick Garland is “very much a man of the rules” who would expect to be made aware of the pending arrest of a prime minister “of even a small country.” He added that he assumes the US did alert senior UK officials, “unless this happened on very short notice.”

Here, official confirmation of Mr. Fahie’s arrest came in the form of a press release from the Governor’s Office on April 28, which detailed the charges put to Mr. Fahie earlier that morning in Miami.

He also described the arrest as a “US operation” led by the US DEA, which he said was unrelated to the UK-led COI report which he released the following day instead of in June as initially planned.

In an April 29 press conference, Mr. Rankin reiterated that he was made aware of Mr. Fahie’s arrest the day it happened.

“Let me assure you that the first I heard of the arrest that took place yesterday was yesterday,” he said in response to a question about the timeline of calling the press conference and releasing the report. “I had no prior information on it whatsoever. This was a US-led operation in which neither my office nor the UK had any involvement. … This was in no way pre-planned. I had no knowledge of this arrest which was due to take place, and I was as shocked as anybody else.”

Mr. Rankin reiterated these claims on the podcast, saying he was not made aware of the pending events. He described calling then-Acting Premier Dr. Natalio “Sowande” Wheatley to his office the morning of April 28 to inform him of the arrest immediately after finding out himself.

The governor subsequently made the information public, he explained.

“It was London who informed me, because they had been informed by the US authorities that morning of the arrest of Premier Fahie,” the governor said on the podcast. “This was not a joint UK-US operation.”

Mr. Whittell, however, said he received additional information shortly after interviewing the governor.

“A short piece of audio sent to us inadvertently by the Governor’s Office, recorded in the moments following our interview, suggests that the governor does usually sign off on DEA investigations on the islands and that he did know investigations were under way,” he claimed.

Though the audio is muffled, the governor can be heard saying, “I do give the authorisations for DEA operations here. I was aware of the investigations [inaudible].”

Mr. Whittell said he asked the Governor’s Office about the audio clip, but Mr. Rankin maintained that he had no foreknowledge of the arrest and said the clip supported his stance.

Asked on Oct. 5 if the governor typically authorises DEA operations in the VI and if he authorised the sting that led to Mr. Fahie’s arrest, the Governor’s Office reiterated that position: “As the governor has previously made clear, he had no prior knowledge of the operation to arrest former Premier Fahie on serious charges of drug trafficking and money laundering. It was a US operation on US soil.”