While gathering information about post-emancipation land sales in the Caribbean, Virgin Islands historian Dr. Mitch Kent was looking through centuries-old newspaper clippings when he came across something unexpected: two advertisements …

END_OF_DOCUMENT_TOKEN_TO_BE_REPLACED 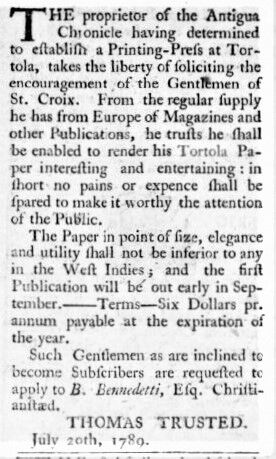 This newspaper advertisement in the July 25, 1789 edition of the Royal Danish American Gazette, published in St. Croix, announces the installation of a printing press on Tortola. This would be the earliest known printing press on the island. (Photo: PROVIDED)

While gathering information about post-emancipation land sales in the Caribbean, Virgin Islands historian Dr. Mitch Kent was looking through centuries-old newspaper clippings when he came across something unexpected: two advertisements for a printing press and newspaper in Tortola.

As far as Dr. Kent knows, the printing press was the first in Tortola, predating by more than 150 years a World War II-era newssheet called The Torch, which he had previously thought to be the earliest such publication in the territory, he said.

“I realised straightaway that, based on the knowledge I have about newspapers in the British Virgin Islands, that this considerably predated anything that I’d ever encountered before,” Dr. Kent said.

He found both advertisements in the July 25, 1789 edition of the Royal Danish American Gazette, a newspaper published in St. Croix.

One of the ads, which is dated July 20, informs readers that the owner of a newspaper in Antigua had started another publishing venture in Tortola, and that he expects the first issue of his “Tortola Paper” to be published by September.

The advertisement notes that subscriptions will be sold for $6 a year, and states, “The Paper in point of size, elegance, and utility shall not be inferior to any in the West Indies. … No pains or expence shall be spared to make it worthy the attention of the Public.”

It is unclear why the two advertisements in the same newspaper contained apparently contradictory information about the timing of the press’s launch.

“That’s the first time I’ve even come across a printing press being in the Virgin Islands at that time,” Dr. Kent said.

During this time period, newspapers in the region played an important role, Dr. Kent said.

There was vigorous trade between the islands of St. Thomas, St. Croix and Tortola, and newspapers helped residents of these islands do business with one another, he explained. Newspapers from this time period were typically short on stories and chockfull of advertisements, according to the historian.

Often, people would purchase advertisements announcing their eminent return to the mainland, so that people to whom they owed money could contact them to settle their debts, Dr. Kent said. People would also frequently buy ad space if they were selling an estate, which typically included the sale of slaves, he explained.

“For the most part, these are advertisements that today you or I would find absolutely horrific,” Dr. Kent said.

Much of the news that filled the pages of the period’s newspapers centred on international reporting, though any major local occurrences, such as naval ship docking at one of the islands, would make the news as well, Dr. Kent said.

He added that the British Library and the United Kingdom’s National Archives would likely hold more information about the newspaper.

It’s even possible that the British Library might have several issues printed from the press, Dr. Kent said.

“I can’t imagine that any copies of this newspaper didn’t make it back to London,” he said.

“It would have had to, because there was an agent for the Virgin Islands in London at that time.”