Thousands of cans of Diet Coke have washed ashore on the beach near Paraquita Bay, and residents are scratching their heads trying to figure out where they came from and …

END_OF_DOCUMENT_TOKEN_TO_BE_REPLACED 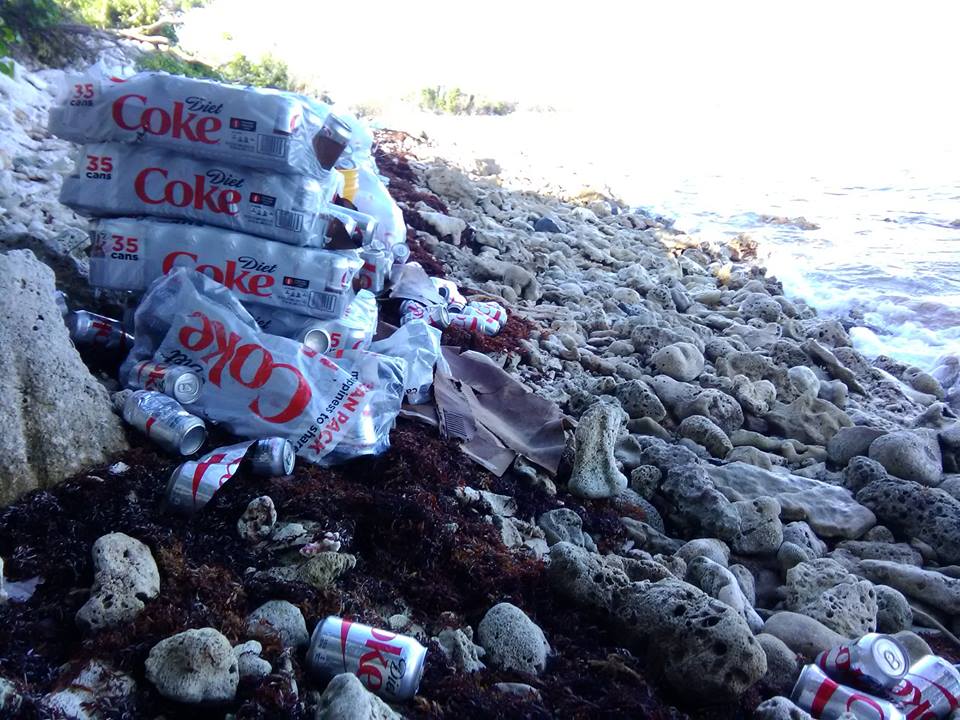 Thousands of cans of Diet Coke were found along the shore of Paraquita Bay on Sunday. The National Parks Trust of the Virgin Islands is looking for volunteers to help clean up the garbage before it washes back out to sea. (Photo: Nancy Woodfield Pascoe)

Thousands of cans of Diet Coke have washed ashore on the beach near Paraquita Bay, and residents are scratching their heads trying to figure out where they came from and how to clean them up.

Nancy Woodfield Pascoe, the deputy director of the National Parks Trust, has been renting a house in the area while her property is being repaired post-Hurricane Irma.

“My husband was out walking down next our house and he sees something shiny,” she said. “Next thing I know, my daughter is running up to me saying, ‘The beach is covered in Diet Coke!’”

And it’s not just cans.

“There’s whole cardboard cases of it,” she said. “The plastic has ripped open as it’s hit the rocks. We’re just stacking them; trying to gather as much as we can.”

At first she thought the problem might be limited to the shoreline close to their home near Whelk Point.

“Then my husband looks west to Paraquita Bay, and it’s all down that coast too,” she said.

She added that friends have found the cans as far away as Hodges Creek.

“We need to find out where the problem is,” she said. “Obviously, it’s easterly facing beaches. I don’t know where else they might be.”

Before anyone gets any ideas about free Coke, Ms. Woodfield Pascoe noted that the cans aren’t salvageable.

“The sell-by dates are in January and February,” she said.

That’s also what made her think the cans did not originate in the VI.

“At first my daughter was like, ‘somebody must be missing Diet Coke here,’” she said. “Ironically, at the store this weekend, I couldn’t buy any.”

But likely the cans came from much farther out at sea, the NPT wrote on its Facebook page.

“This is the result of ocean garbage, probably washed off a cargo boat,” the NPT said in a post.

Now Ms. Woodfield Pascoe is calling for volunteers to come help with cleanup.

“Right now, it’s too overwhelming: We started gathering and making piles to gather up the beach so they wouldn’t wash back out,” she said. “Now we recognise the scale of the problem. We need help. We don’t want it to get washed back to sea.”

She added that the cans have been difficult to move, and are heavy because they’ve been punctured and filled with seawater.

“We thought we’d open them and tip them over, but [the cases are] huge,” she said. “And then we tried to burst them open and we were being sprayed in Diet Coke.”

She said volunteers can access the beach through the area of the former Fat Hog Bobs restaurant. She also invited potential volunteers to call her at 346-9007, or contact her through WhatsApp or Facebook.

“To all the Diet Coke drinkers, it’s karma,” she said. “They have to come out here and come help pick it up.”