Disability gets visibility during Awareness March

It wasn’t long ago that many Virgin Islands residents with disabilities would remain largely out of public view. On Friday, however, they and their supporters were among about 100 people …

END_OF_DOCUMENT_TOKEN_TO_BE_REPLACED 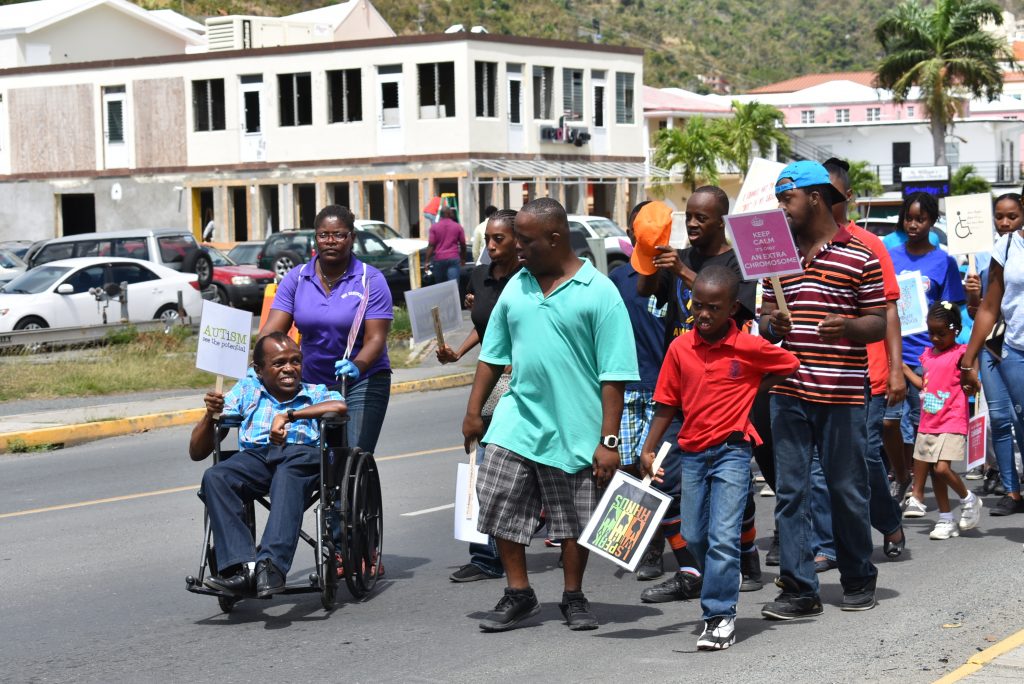 Children and adults with disabilities lead a group of marchers down Waterfront Drive during the Disability Awareness March and Fun Day on Friday. (Photo: CLAIRE SHEFCHIK)

It wasn’t long ago that many Virgin Islands residents with disabilities would remain largely out of public view.

On Friday, however, they and their supporters were among about 100 people who processed through Road Town during the Disability Awareness March and Fun Day.

“Keep calm, it’s just an extra chromosome,” read a sign carried by a boy with Down syndrome. Another sign urged, “See me, not my disability.”

Sometimes the disabled aren’t willing or able to express what kind of help they need, and people may be afraid to ask, Mr. Matthew explained.

“Ask, ‘How can I help you? What can I do for you?’” he advised. “You can help in any way as long as that person is willing to accept your aid. … Yes, sometimes they have a hard time accepting help and it’s hard for them to express what kind of help they need, but going about daily life there are certain things that you’re not able to accomplish.”

For instance, he explained, some disabilities cause speech impairments, which may make interacting with businesses and government agencies a challenge.

Mobility remains a major concern, too. Mr. Matthew said he prefers to use a walker at home, but that can be difficult out in public.

“To me it’s more of a strain in the walker because of how I use the walker,” he said. “One of my hands is stronger than the other.”

He explained that travelling around Road Town is “much easier in the chair,” especially if he has someone around to help. Asked what other challenges exist for disabled people in the VI, he named employment.

He thinks disabled people in the territory want to work, but finding jobs suited to their abilities can be impossible without help. “I myself would have some- one, like a government official, to help me find something that I am capable of doing, given a chance,” he said. “You have to give them a chance.”

With Mr. Matthew and his friends heading up the group, the enthusiastic marchers proceeded from Althea Scatliffe Primary School through the streets of Road Town and into Noel Lloyd Positive Action Movement Park, where Lorna Dawson, coordinator of the Autism Centre, greeted them.

Ms. Dawson, who is also supervisor for disability services, explained the activities that awaited them, from videos to a bouncy castle to an Easter egg hunt.

“As you play together today, there are children among you who have disabilities and who you probably won’t even realise it, because you’re going to be having so much fun accepting and working with each other,” she said.

Ms. Dawson added that events like the march, which has been taking place annually since 2011 when it began in concordance with the Buddy Walk for cerebral palsy, play a role in spreading awareness of disabilities in the VI, which she said has “improved greatly” in recent years.

“There are more persons aware of different disabilities and eager to participate in [these activities],” she said.

During the march, Governor Gus Jaspert danced down Waterfront Drive alongside several children.

“In the BVI we value everybody in society and we want the best for everybody,” he said, adding, “For children who have a few extra needs, it’s about ask- ing ourselves how best can we support them.”

Ms. Dawson reminded attendees that this spring featured a series of events focused on disability awareness.

March included awareness days for both Down syndrome and cerebral palsy, conditions that can cause someone to have a variety of mental and physical differences. The focus for April is shifting into autism awareness, and the event in the park included activities teaching children about how their classmates on the autism spectrum may be- have, and how best to befriend them.

The Autism Centre opened in 2012, giving children on the autism spectrum
more opportunity to remain in the VI for specialised services as opposed to travelling abroad.

Training is an ongoing mission. In December, teachers and parents visited the centre to receive training on the Secret Agency Software game pack, a computer pro- gramme designed for children who may have difficulty communicating and expressing and understanding emotions.

Other organisations in the VI also play a role in helping the disabled live meaningful lives. Jean Mathias works with BVI Services, where she instructs residents with disabilities to make crafts out of recycled materials, including picture frames and Christmas ornaments. She sees her role as helping people with disabilities keep their minds and bodies active — in some cases, when their families can’t or won’t step up to help. The hardest part of her job, she said, is “if we don’t have any cooperation with the family. If we don’t, we have a difficult time.”

She added,“We have some of them giving up on themselves. They would try but they wouldn’t have much of a spark. They would just try a little and then once you boost them they would get it done.”

Activists in the territory have at times decried the narrow streets and sidewalks, perilous curbs and inaccessible buildings that are just some of the challenges both residents and visitors with disabilities continue to face.

The government has taken notice in the past. In 2011, then-Deputy Premier Dancia Penn, the minister of health and social development, announced a plan to draft a disability policy. About two years later, HSD Ministry Permanent Secretary Petrona Davies told the Beacon that a draft existed but that it “hasn’t been endorsed by government.”

The draft, which she said was put together by a paid consultant, had to do with “access and opportunities in the society, education — it’s looking at what barriers exist in the community to ensure everyone can benefit.”

The draft, she added, was being reviewed by a committee and likely would be followed by legislation after completion.

Ms. Davies couldn’t be reached for comment about whether there has been any progress on the draft since 2013. However, Ms. Dawson said she thinks it is still moving forward in some form, “because some focus group meetings were held with persons with disabilities or the family members.”

She added, “I can’t say definitively what has been done since.”

Despite the challenges, Ms. Mathias called it a “privilege to work with [people with] disabilities,” and added that she was proud to be at the event that day.
“Never look down on them or do anything but embrace them as your own,” she advised. “There’s a lot of love here.”

Another attendee, who identified herself as Nicola, had trouble walking, but it didn’t prevent her from showing off her best moves as she danced to soca music beside several of her friends. She had a big smile on her face.

For her, the message behind the march was loud and clear: “It’s okay to have a disability,” she said.