Government officials visited Jost Van Dyke on Tuesday to discuss disaster preparedness in a meeting in which dozens of residents showed up at the Methodist Church Annex. Some voiced their …

END_OF_DOCUMENT_TOKEN_TO_BE_REPLACED 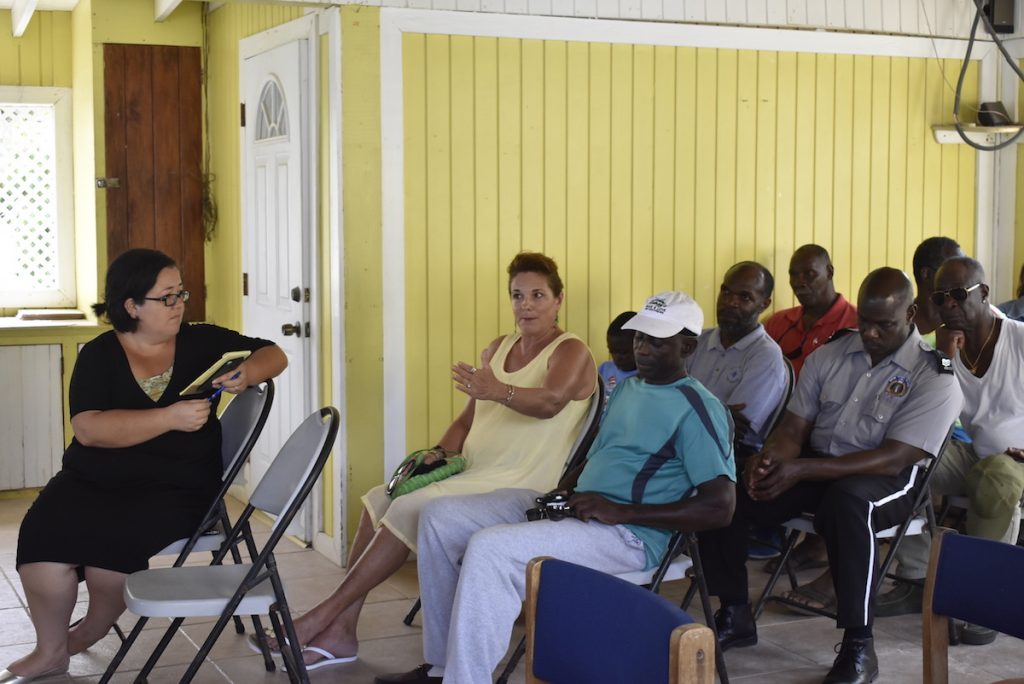 Dozens of Jost Van Dyke residents showed up to a disaster preparedness meeting on Tuesday as part of a series of sessions on the sister islands. Wendy Hendricks (left) said she is still living in a tattered tent without electricity or running water despite multiple appeals through government agencies.(Photo: GENEVIEVE GLATSKY)

Government officials visited Jost Van Dyke on Tuesday to discuss disaster preparedness in a meeting in which dozens of residents showed up at the Methodist Church Annex.

Some voiced their concerns about what they said is a lack of resources and services provided to the island.

Governor Gus Jaspert and officials from the Department of Disaster Management also held similar meetings in Virgin Gorda and Anegada in recent days.

He also said that in the event of a disaster the National Emergency Operations Centre would send out communications through district officers.

DDM Deputy Director Evangeline Inniss-Springer explained that JVD does not currently have any primary shelters with backup generators, backup water and bathrooms, and kitchen facilities.

Instead, she said the Church of God of Prophecy would be used as a “tertiary” shelter, although it can only hold 30 to 50 people.

She added that government is in discussions with private entities to add other buildings to the shelter list but nothing has been finalised yet.

Ms. Inniss-Springer also reviewed other disaster preparedness measures, including training that was carried out last year with around eight to 10 business owners on how to get a business running after a storm, as well as legislation designed to offer some kind of livelihood protection insurance that is currently working its way through government.

Residents also used the meeting as an opportunity to air their view that JVD received fewer resources from government than the other islands, with one residents shouting, “We are tired of being neglected.”

“Jost Van Dyke generates the most money in the BVI,” stated one resident, “and it gets treated the worst.”

Another resident, Wendy Hendricks, said she is still living in a tattered tent without electricity or running water despite multiple appeals through government agencies.

“The fact is simply some people fall through the cracks,” she said.

Mr. Turnbull responded that he had heard of those residents’ struggles and was in contact with various government ministers to address the situation.

Ms. Inniss-Springer also pledged to look into several issues and requests raised by residents at the meeting, including a fit-for-purpose emergency shelter; gaps in the housing rebuilding programme; a flood water management plan for Great Harbour; heavy equipment pre-deployment with a focus on a backhoe and a three-yard truck; the clearing of ghuts and drainage waste; permanent warehouses for equipment like satellites; and road enhancement.

Mr. Archer also took pains to lay out the functions of different government offices and to explain how residents could maintain regular communication with government.

He described a “two-pronged approach” that includes going through Mr. Turnbull for most day-to-day government operations, as well as JVD’s district officer, Ms. Blyden, to reach the Deputy Governor’s Office.

“Government works for you,”

Mr. Jaspert repeated over and over, urging residents to continue to voice their concerns and maintain an ongoing dialogue.

Similar concerns were expressed Monday during a meeting at the Catholic Community Centre on Virgin Gorda, which drew about 40 people.

The governor began the session by thanking residents who aided in the recovery effort. Then he turned the floor over to attendees.

One of the first concerns raised was the lack of a primary shelter in The Valley.

DDM Deputy Director Evangeline Inniss-Springer explained that the Catholic Community Centre had been slated to serve as a primary shelter but because it still lacks backup water and electricity systems it could not receive the designation. She didn’t know when the backup systems would be in place but promised to follow up.

Anne Lennard, the VG coordinator for the BVI Red Cross, highlighted the need for shelter managers.

Ms. Inniss-Springer told attendees that multiple Community Emergency Response Team training sessions have been conducted or are under way. She added that some CERT participants have expressed interest in becoming shelter managers.

Other attendees asked about plans for residents who need access to medicine or who suffer from health problems such as diabetes. Ms. Inniss-Springer responded that agreements are in
place to get medicine into the territory quickly from other islands, including Puerto Rico, in the event of a disaster.

In one of the concluding statements, Natural Resources, Labour and Immigration Minister Vincent Wheatley, who represents VG, urged residents to “prepare, prepare, prepare.”

He also asked who owns battery-operated radios, and the majority of attendees raised their hands. “We will not take the next one lightly,” Mr. Wheatley said.