Around 10:30 a.m. on Monday morning, somebody asked Dr. Shannon Gore, the managing director of the Association of Reef Keepers, to call Blue Water Divers.  While on the phone with …

END_OF_DOCUMENT_TOKEN_TO_BE_REPLACED 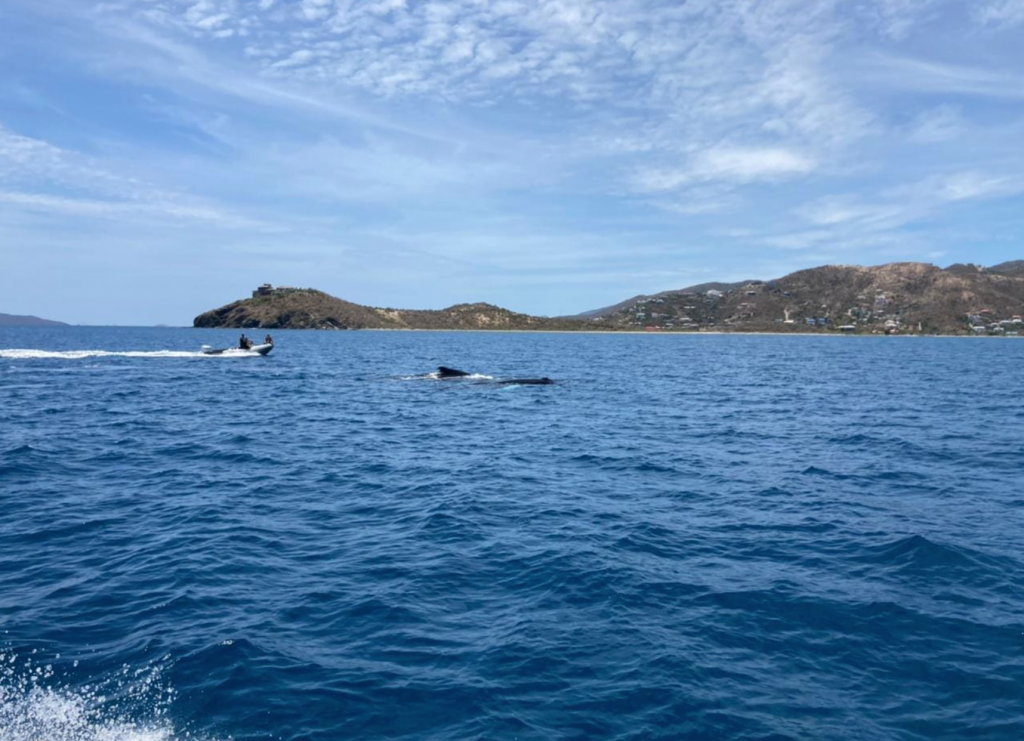 After news spread quickly Monday morning about a distressed whale somewhere in the water off Nanny Cay, a team of divers helped set it free. (Photo: JOEY WALDINGER)

Around 10:30 a.m. on Monday morning, somebody asked Dr. Shannon Gore, the managing director of the Association of Reef Keepers, to call Blue Water Divers.

While on the phone with the company, Dr. Gore overheard radio chatter describing a distressed whale somewhere between Nanny Cay and Great Harbour, Peter Island.

“That’s really the only information we got,” she recounted, adding, “We automatically assumed this poor whale is struggling to breathe, but it was completely different from that.”

It turned out that there were actually three whales, one of which had a rope tangled around its flippers. With some guidance from a team of divers, it was eventually able to set itself free and swim off unscathed, said Chris Juredin, the owner of Commercial Dive Services who helped lead the whale to safety.

But before that, Mr. Juredin and his team first had to find the pod, which was no easy feat considering the limited information he gleaned before rushing onto the water.

After searching for the whales in the channel between Nanny Cay and Peter Island, Mr. Juredin and his team guessed that the mammals were probably two to three miles away from their last sighting.

Since whales often travel east through the territory, they set off in that direction, eventually coming across the whales near Beef Island, Mr. Juredin said.

The largest of the whales had a long rope trailing from its pectoral fin and was rubbing itself in the sandy bottom to try and get free, Mr. Juredin said.

Until the whale untangled itself, he and his team worked to corral the animal between water that was too deep and too shallow, making sure it neither drowned nor beached itself, he said.

As the whale swam into increasingly deep waters, Mr. Juredin and his team of divers would “race” in front of it and then dive down until they were just a couple feet away from its head, he said.

They would then swim in a circle around the whale, prompting it to ascend to the surface, which allowed the divers to “herd” it back to shallow waters, where it could continue to rub against the ocean floor, Mr. Juredin said.

About three miles from Virgin Gorda, the rope came loose and the whales swam off, apparently completely recovered and in good spirits, Mr. Juredin said.

Though Mr. Juredin and his team of divers were the only ones underwater with the whales, about seven other boats joined in the search effort.

News spread quickly over VHF radio and online, with Facebook posts urging anyone sea-ready to go out and help.

While Dr. Gore praised the instinct to help out animals in need, having too many hands on deck could actually do more harm than good, she said.

“That’s the worst situation, when there’s a lot of boats out there,” Dr. Gore said. “It could just scare the animal and make it swim away. … Nothing would have been able to be done.”

In case of such incidents in the future, Dr. Gore proposed a protocol akin to a “chain of command,” in which reports of distressed whales and other incidents would first be directed to a designated fisheries officer, who would then pass the message down to other marine and natural resource officials if extra help is needed.

To make the oceans safer for whales, she also said that boaters should stay at least 100 feet from any whale, and discard or report any fishing nets, rope or other junk floating in the sea.

“If you do see a large net that’s floating, contact fisheries so that someone can pull it out of the water,” Dr. Gore advised.