More than three years after Hurricane Irma destroyed the wooden welcome centre at the Dog Hole Jetty on Jost Van Dyke, a permanent structure has been built in its place. …

END_OF_DOCUMENT_TOKEN_TO_BE_REPLACED 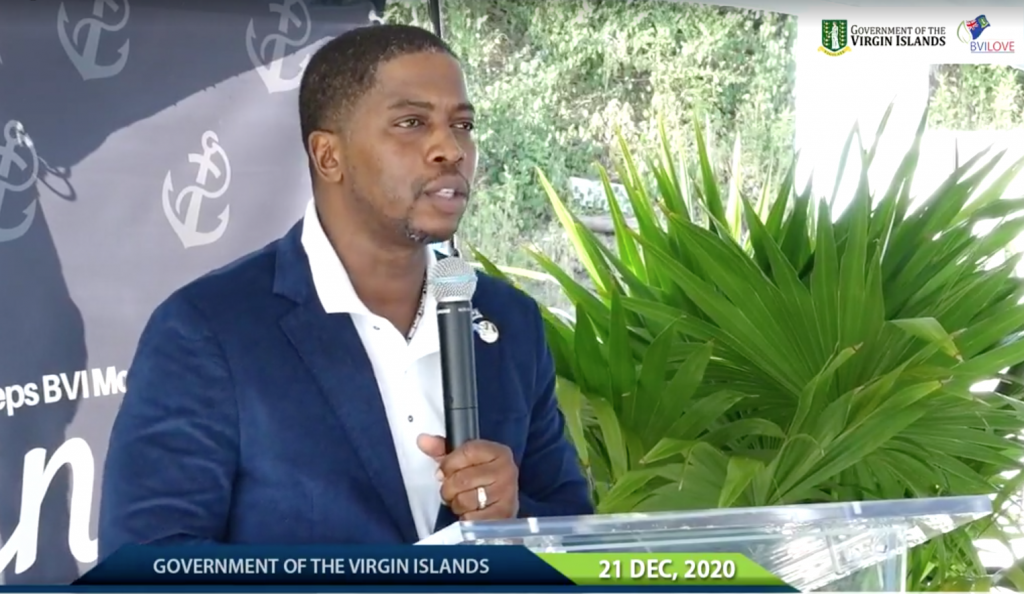 As an island that is sometimes overlooked by government but brings in a strong share of the territory’s tourism revenue, Jost Van Dyke deserves to have a modern, functioning welcome centre at the Dog Hole Jetty, Melvin “Mitch” Turnbul (R-D2) said at a press conference yesterday. (Screenshot: GIS)

More than three years after Hurricane Irma destroyed the wooden welcome centre at the Dog Hole Jetty on Jost Van Dyke, a permanent structure has been built in its place.

At 2,538 square feet, the new building, which will be outfitted with Wi-Fi and space for vendors, will serve as the main arrival hall for guests to the sister island, though it will also include some office space for various government agencies, said Chairman of the Board of the BVI Ports Authority Kelvin Hodge at a press conference yesterday.

Starting Jan. 15, officials from the BVIPA, the BVI Tourist Board, the BVI Electricity Corporation, and the Water and Sewerage Department will all report to work at the new building, making it so that residents don’t have to leave the island to pay their bills, said Junior Minister for Tourism Sharie de Castro.

Although residents of Jost Van Dyke and other sister islands often complain of receiving less attention than their counterparts on Tortola, Ms. De Castro pointed to the construction of this building as proof of the current administration’s commitment to the sister islands.

“Last year, when [the new government was elected], we set sail, and entered into a new adventure, because we wanted to ensure that the dreams and aspirations of the people of Jost Van Dyke were fully realised,” Ms. de Castro said.

“This … building is one that has been I think one of the teething pains that I’ve been speaking about even before the hurricanes of 2017,” Mr. Turnbull said.

Although Mr. Turnbull had wanted to improve upon the old wooden structure before the hurricanes struck, these plans were upended after the clouds passed, he said.

For years, tents replaced the wooden structure welcoming visitors and residents, he said.

Mr. Turnbull visited the island about four days after Irma made landfall, he said. Seeing the smiles on the residents’ faces, and seeing how resilient they were amid total destruction, moved him to tears for the first time since the storm hit, he said.

“The people of Jost Van Dyke don’t just talk about love … they depend on one another,” Mr. Turnbull said.

He added, “The people of Jost Van Dyke deserve this. … They deserve a port, … that is fitting to welcome people to their shores.”

However, it is not enough to invest just in the infrastructure of Jost Van Dyke, and government must ensure that when development opportunities arise on the sister island, residents are given the chance and equipped with the skills to compete for these contracts, Mr. Turnbull said.

“We have to make sure they are the ones getting the work,” he said.