With less than seven weeks until the Virgin Islands’ borders are set to reopen to non-residents for the first time since late March, government has launched a series of meetings …

END_OF_DOCUMENT_TOKEN_TO_BE_REPLACED 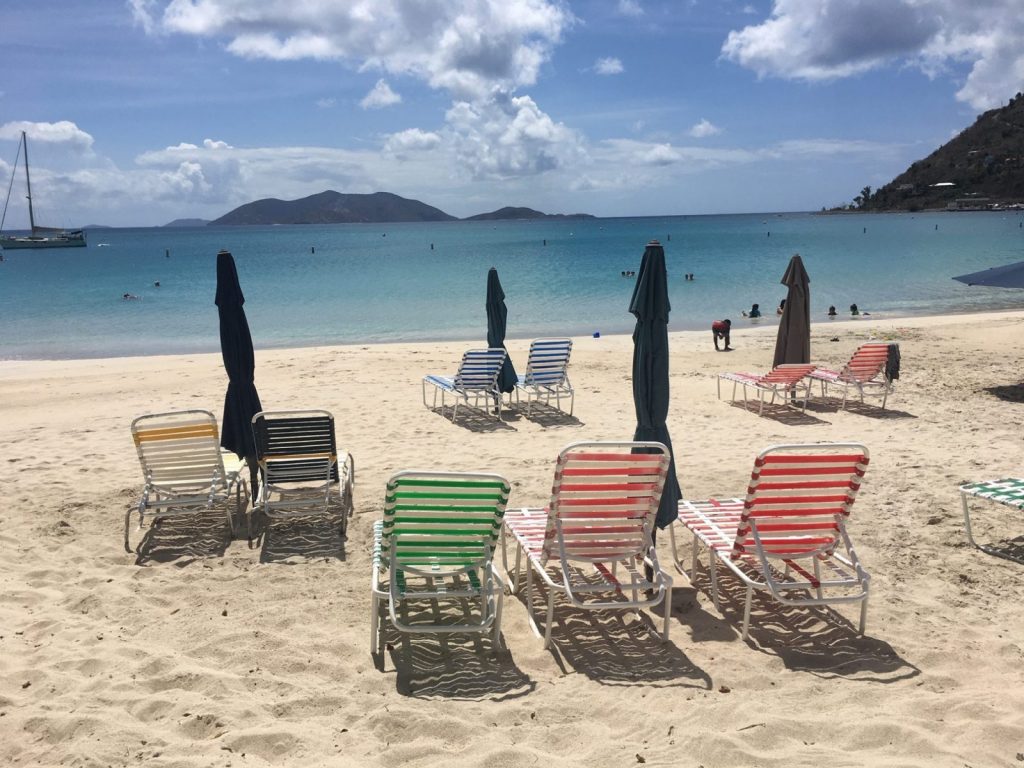 With less than seven weeks until the Virgin Islands’ borders are set to reopen to non-residents for the first time since late March, government has launched a series of meetings with stakeholders in various service industries about a draft plan for reopening protocols.

But as of the Beacon’s deadline yesterday afternoon, community members not directly involved in the tourism sector were largely left in the dark about how exactly the Dec. 1 reopening will unfold. 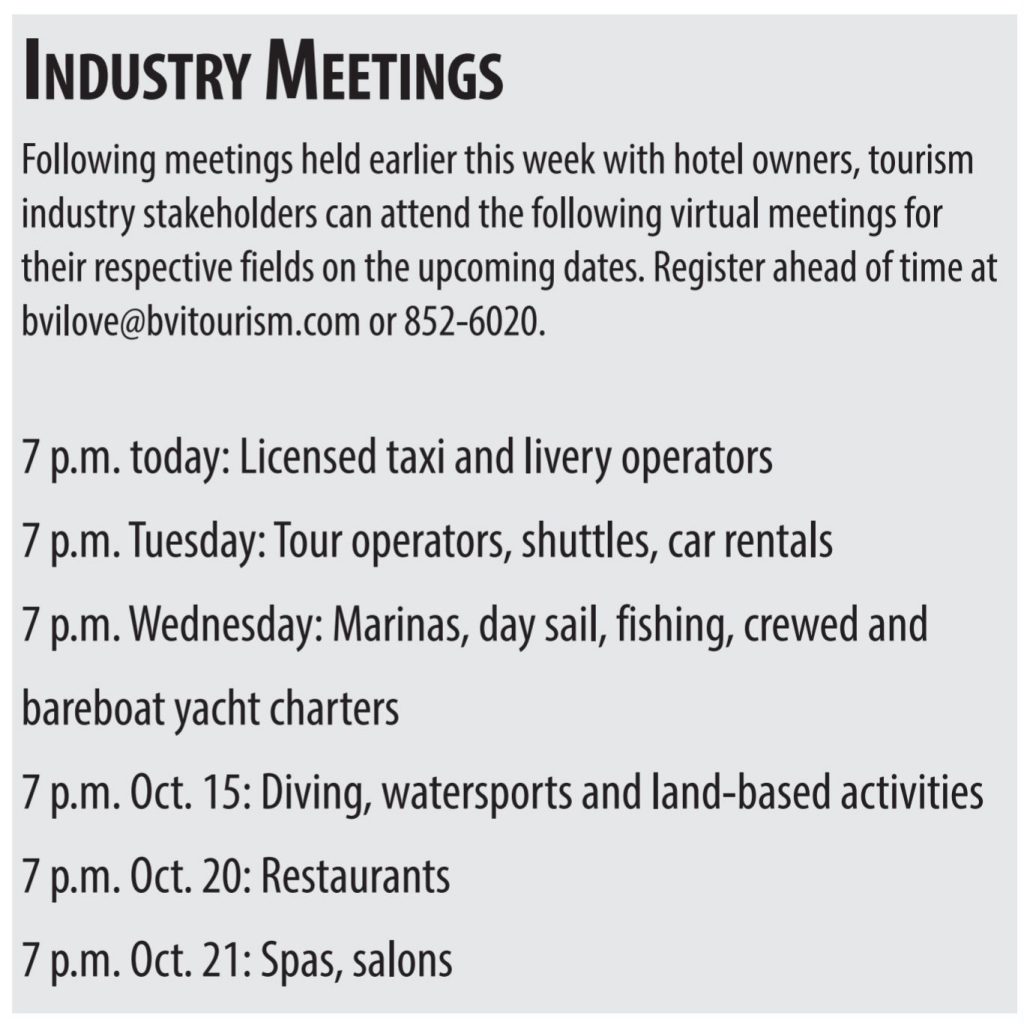 Premier Andrew Fahie said in a Monday interview with ZBVI Radio that a draft of the entry protocols for tourists had been completed and was being reviewed by industry leaders, but government has not provided the document to the public.

Though he did not provide many specifics of what will be required, Mr. Fahie said visitors will have to take an authenticated Covid-19 test before entering the territory, take an additional test upon arrival, and adhere to a “short quarantine period.”

“I do not want to go into details with those until we fine tune all of them,” he said.

In about three weeks, he added, visitors will be able to download an app with a clear explanation of the protocols they must follow while visiting the VI.

Media were not permitted to attend the first BVI Tourist Board-sponsored stakeholder meeting on Tuesday, which officials said was limited to representatives of the territory’s resorts, private islands and large hotels.

Keith Dawson, the BVITB marketing manager, said the attendance restrictions were implemented because certain aspects of the draft plan weren’t ready for public eyes. A press release, he added, was scheduled to be published yesterday, but that release was not available as of the Beacon’s press deadline yesterday afternoon.

“We would have liked to see a comprehensive plan delivered in short, but something is available in draft and we encourage all to participate in the sessions over the next two weeks and give adequate feedback,” Ms. Jackson-George said in an email.

She added that certain protocol recommendations discussed at the stakeholder meeting, like the possibility of tourists wearing GPS tracking bracelets, were based off practices already established in other Caribbean countries. For example, Bermuda requires that visitors who test positive for Covid-19 be fitted with a GPS tracking bracelet in quarantine.

That territory recently reopened its airport for commercial flights after a three-month suspension. All visitors must also submit to tests on the third, seventh and 14th days of their stay. Bermuda Premier David Burt said if the results come back positive at any point, travellers would be required to isolate in their rooms and wear a tracker.

An Oct. 2 report by the Caribbean Public Health Agency showed that most other Caribbean countries also had established some type of reopening protocols.

Ms. Jackson-George said VI business owners claimed on Tuesday that they are losing a lot of business to areas with protocols already in place, including the United States VI.

After conducting a poll of attendees to the Tuesday BVICCHA session, Ms. Jackson-George gathered that 45 percent of respondents said they had lost more than 20 bookings. One owner reported losing more than $50,000 from cancellations.

“Many have lost far more than that and indicated the tsunami of Christmas cancellations is very close,” she wrote, adding, “The concern is that they may be long term. The situation is dire but we need for everyone to join the discussions for the draft protocols.”

Feedback can be submitted to bvilove@bvitourism.com.

The premier said during the Monday ZBVI interview that as part of the territory’s reopening plan, entry into the VI would be limited to airports while seaports remain closed during the first phase.

Considering the significant risk of reopening the borders to tourism, Mr. Fahie said only opening the airports on Dec. 1 will make the process more manageable.

“The airport protocol is already completed: It is just a matter now of having a few areas fine-tuned with health,” he said.

Test runs for how the airport will operate will be conducted in mid-November, he said. Government aims to reopen the tourism industry while reducing the risk to the safety of residents as much as possible, he added.

“We are trying to ensure that we do not import cases because we were not prudent and precise about our protocols,” he said.

Mr. Fahie said he hoped Cabinet would approve a partial list of reopening protocols by Friday, after which the specifics would be made available to the entire community. He said the remainder of the protocols would come to Cabinet after the rest of the stakeholder meetings take place.

On Nov. 30, he added, the Terrance B. Lettsome International Airport will undergo “rebranding” of its VIP lounge and see the dedication of a new fire truck.

“We are full speed ahead with the rebooting of our tourism economy,” Mr. Fahie said.

As the territory prepares for reopening, Health and Social Development Minister Carvin Malone announced on Tuesday that the Dr. Orlando Smith Hospital laboratory had run 5,161 tests to date and discovered no new cases of Covid-19 since Sept. 18. Only one active case remains out of a total 71 recorded, he said.

In a Facebook live announcement Wednesday evening, Mr. Malone announced the number of active cases was reduced to zero with the last person’s recovery. At the same time, he said the territory-wide curfew was reduced to between midnight and 5 a.m. All businesses, including bars, will be allowed to open per strict guidelines.

“These low to no active cases are a good indication that the public is complying to all the health and safety protocols and measures that the government has put in place,” Mr. Malone said in the press release. “It is also a good indication on our readiness for re-opening in the weeks ahead, which will give our economy the boost that it needs.”

Earlier this year, the territory experienced a 75-day stretch with no active cases, before a surge that saw 63 new recorded cases in August and September. The testing number is up from the 4,841 tests run as of Sept. 28.

Anyone experiencing symptoms of Covid-19 is encouraged to contact the medical hotline at 852-7650.

To ensure people are adhering to guidelines to suppress the spread of the disease, the Social Distancing Task Force came into full force on Monday, government announced.

“Officers will be responsible for the daily monitoring of designated areas in the territory to ensure businesses and individuals are in compliance with preventative health and safety measures such as wearing of face masks in public spaces, maintaining gathering sizes, physical distancing, and sanitisation protocols and measures,” according to a Tuesday press release.

Per the curfew set to remain in place at least through today, people must remain in their homes between 8 p.m. and 5 a.m. daily.

Individuals may have to pay a $100 fine on the spot for mask violations, and businesses could be fined $1,000. Businesses failing to enforce social distancing measures risk being shut down.