A May 8 brush fire that threatened to engulf Simon Potter’s Meyers Estate home was one of several similar blazes in recent weeks, according to Chief Fire Officer Zebalon McLean. …

END_OF_DOCUMENT_TOKEN_TO_BE_REPLACED 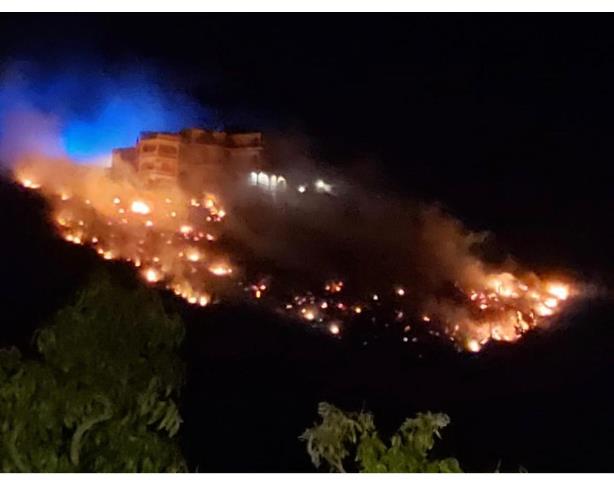 Firefighters have had to battle multiple brush fires across the territory in recent weeks. (Photo: PROVIDED)

A May 8 brush fire that threatened to engulf Simon Potter’s Meyers Estate home was one of several similar blazes in recent weeks, according to Chief Fire Officer Zebalon McLean.

The unusually dry “drought-like” conditions this year are likely the cause of the abnormally high number of such fires, Mr. McLean said Tuesday, adding that the islands are particularly vulnerable to wildfires and urging residents to refrain from open burning and littering.

He explained that the fires were likely caused by controlled fires that got out of control or by tossed cigarettes, although it is often difficult to definitively determine a cause.

That number is much higher than last year’s, and homes were in danger in two of those instances, he added.

Littering, he said, can also cause fires when bottles and cans refract or reflect rays of sunlight, which can ignite flammable objects in the vicinity.

“We need the public’s help to stop a disaster from happening,” he said. “We’ve stopped a blaze 10 feet away from house. That’s too close.”

It can take more than 25 firefighters to put out a major brush fire, Mr. McLean said, and while the officers have done a “wonderful” job so far, he remains concerned that a blaze could get out of control because of the territory’s geography.

Mr. McLean added that the water used to extinguish fires from private cisterns and the public water supply reduces the amount of water available for residents.

“It’s best in these times we not create any opportunities for us to have to use that water,” he told the Beacon. “That means absolutely no burning.”

He also said that the fire department needs more pumps and water packs but that it has been doing its best “to improvise and adjust.”

Transportation, Works and Utilities Minister Kye Rymer said in a May 9 press release that he is working on providing the necessary equipment.

“I must say congratulations to those guys: They worked hand in hand, they worked together,” Mr. Rymer said of the officers who extinguished the more recent fire, adding, “We must also acknowledge the Potters, for giving us the ability to use their home and their cisterns, for use of water.”

The VI Fire and Rescue

Services urged the public to refrain from backyard or hillside burning during the dry season, which is expected to last until June or July, according to the Caribbean Institute for Meteorology and Hydrology.

“Residents should not be burning at this time,” Mr. McLean added. “It’s extremely dangerous, and we encourage them all not to do it. It isn’t really rocket science.”