Last week, a fire engulfed the mountain of trash that has been piled in Coxheath since Hurricane Irma, spewing plumes of thick, black smoke as far as St. Thomas and …

END_OF_DOCUMENT_TOKEN_TO_BE_REPLACED 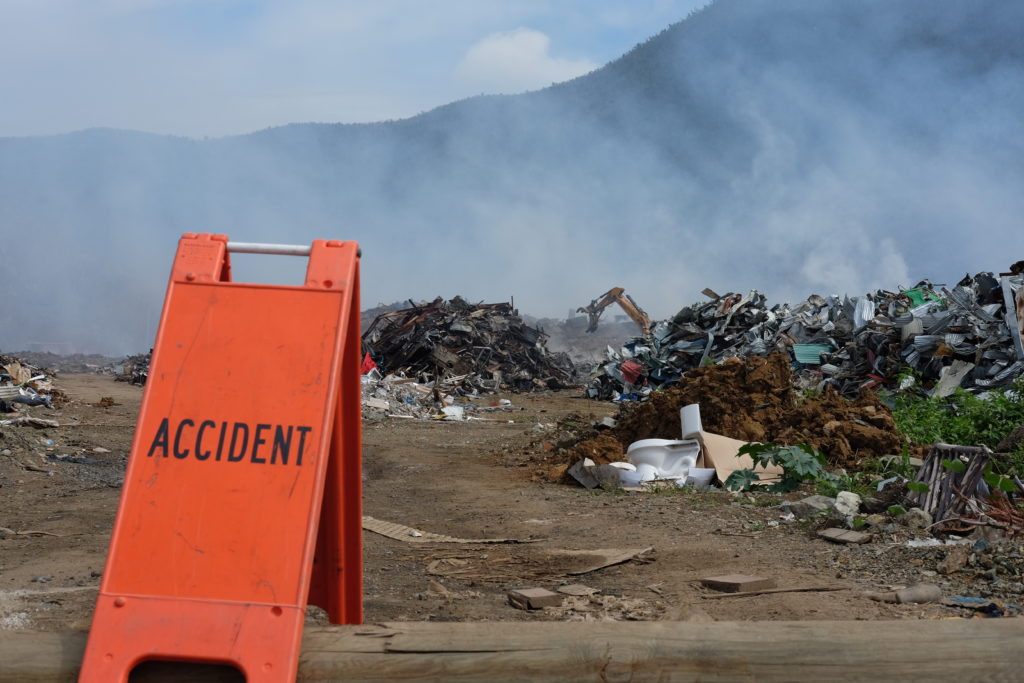 An “accident” sign has been posted in Coxheath as the fire at the dumpsite continues. Some residents who live near the dump have temporarily left their homes while smoke still billows from the area. (Photo: AMANDA ULRICH)

Last week, a fire engulfed the mountain of trash that has been piled in Coxheath since Hurricane Irma, spewing plumes of thick, black smoke as far as St. Thomas and forcing some Tortola residents to temporarily leave their homes.

Though firefighters prevented the flames from spreading to nearby hillsides, the pile is still burning today — a week after it started — and government reported that it would take several more days just to put out the core flames.

As smoke drifted over the site yesterday morning, large flames burst suddenly from one section of the garbage heap before dying down again, likely as waste shifted in the pile.

Officials have not said how the fire started, but they activated the National Emergency Operations Centre last Thursday at Level Two, where it remained as of yesterday afternoon.

Level two signifies a “single localised hazard impacting a large area,” according to the Department of Disaster Management, which added, “The impact will be confined to the affected area. Some disruption of normal routine/life is likely.”

Greg Massicote, the manager of the Department of Waste Management, said many different types of garbage have been dumped in Coxheath since Irma, including lots of combustible items.

“We never had so much waste stored in one area, so we’ve never had to deal with a fire of this size,” Mr. Massicote said.

“Once you’re dealing with dumpsites or landfills, anything that has to do with storing combustible stuff, fire hazards are always on your mind. I shouldn’t say it’s expected — but it’s a possible risk when dealing with waste management.”

The fire, he said, was not set intentionally by the DWM.

“We know the ramifications of setting such a large heap of garbage on fire — it’s so close to communities and is a big health concern,” he explained. “That’s not the way to deal with it.”

Chief Fire Officer Zebalon McLean said his crew has been working day and night to extinguish the fire, while heavy equipment operators are helping to spread out the piles of debris so flames that are still burning deeper within can be put out.

Mr. McLean said fire officers are unsure how the blaze began, but “there’s always a possibility” of fire if certain waste and chemicals are combined.

He added on Tuesday that he is hoping to have the blaze extinguished within a week and a half.

But what’s really troubling Mr. McLean, he said, are the children and adults in surrounding areas who have to “unfairly” deal with thick smoke and harmful particulates in the air. The fire officer said some families have had to temporarily move out of the area.

“It’s bothering me,” he said. “That’s the most frustrating part of it — that we have people down in that area and downwind who are suffering from the smoke.”

Miles west of Coxheath, residents of the USVI have also been grappling with health concerns from the blaze.

Anna Constantinou, who lives above Charlotte Amalie in St. Thomas, said she hasn’t had to use an inhaler for years, but directly after the fire her usually mild asthma was exacerbated.

“I was woken up [last Thursday] by the smell,” she said over the phone, her words punctuated by heavy coughing. “It’s a toxic rubber smell, of burning, and that got me out of my bed really early in the morning.

“People started smelling the smoke all the way in the furthest western part of our island, and people on other parts of the island could actually see the smoke.”

On Facebook, hundreds of other residents around the territory have commented on the effects of the fire, some saying they were worried for the safety of children or other loved ones.

Pockwood Pond resident Judith Charles said her asthma and allergies have also flared up since the fire. She added yesterday that government should have given more frequent updates and press releases.

“It just seems disrespectful, to say the least, that no one in certain official capacities has said anything publicly to people in the last couple days,” she said yesterday.

Though several officials have provided updates directly to the media, government did not release an official statement on the fire between last Friday – when Acting Governor David Archer gave an update – and today.

“The NEOC will remain under a Level Two activation until we are satisfied that the risks have been significantly reduced,” Mr. Archer explained that day.

The previous day, he promised that an update on “the status of the area” would be provided within one week.

This morning, the Department of Disaster Management reported that smoke has “reduced considerably” at the site and there is no “visible surface fire.”

Meanwhile, Environmental Health officers and nurses visited residents in Coxheath, Pockwood Pond and surrounding areas over the weekend to assess the impact and offer medical assistance.

Mr. Archer on Friday warned those in impacted areas to “limit outdoor activities” and urged anyone experiencing respiratory issues to contact a physician.

Dr. Ronald Georges, medical officer of health, said he doesn’t know exactly how many residents have left their homes after the fire, but that several in the immediate area have temporarily relocated.

Dr. Georges added that a hotline (which can be reached at 852-7500 or 852-7681) has been created for residents who want to call in and discuss medical issues spawning from the fire.

But even after the blaze is extinguished, health concerns will likely linger.

Studies have shown that harmful chemicals, including dioxins, can collect in water supplies and vegetation after dump fires, potentially endangering the populace for years to come.

Dr. Georges said dioxins would likely be concentrated in the immediate area around Coxheath, and that other irritants and particulates can travel farther distances.

For those who live especially close to the dumpsite — like Spyglass and Zion Hill — he said, it might make sense to move for now.

“If folks living in those areas are able to relocate, at least temporarily, that’s a good idea, especially if you have chronic respiratory issues or sinus problems,” he said.