Local News > E-voting to be used in next election

E-voting to be used in next election

After four hours and nearly 200 votes cast, the results were in. An eager crowd gathered around Elections Supervisor Juliette Penn, craning their necks as she examined the printout from …

END_OF_DOCUMENT_TOKEN_TO_BE_REPLACED 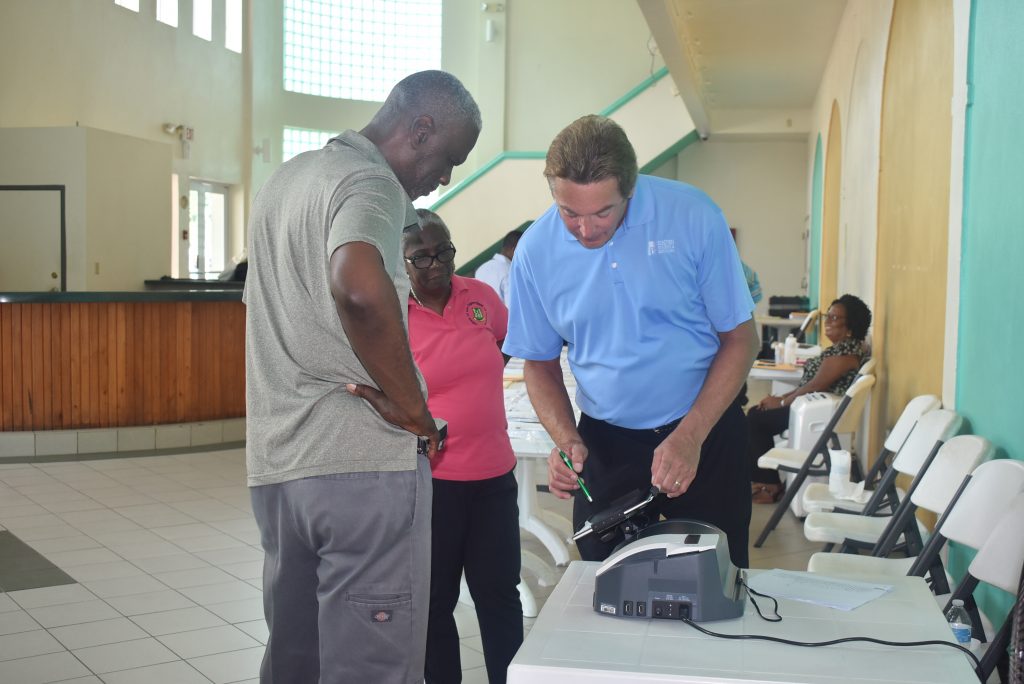 Mark Radke, a representative of Elections Systems & Software, shows a voter how to use the new e-poll books during the mock election held last week at the Multi-purpose Sports Complex, while Elections Supervisor Juliette Penn looks on. (Photo: CLAIRE SHEFCHIK)

After four hours and nearly 200 votes cast, the results were in. An eager crowd gathered around Elections Supervisor Juliette Penn, craning their necks as she examined the printout from the territory’s brand-new DS200 Precinct Scanner and Tabulating Machine, which had been set up last week in the Multi-purpose Sports Complex.

She cleared her throat and read off the results: By two votes, National Democratic Party candidate “Earl Lee Bird” had beaten out his closest rival, the Virgin Islands’ Party’s “Val A. Date,” to become the VI’s next at-large representative.

Next, Ms. Penn announced the winners for each of the territory’s nine districts. For the first time in the VI, everyone could go home just half an hour after the polls closed.

Next time around, the names on the ballots will be real candidates.

But other than that, the scene at this year’s general elections could look similar to last week’s mock vote, which was held on Sept. 26. For Ms. Penn, who has long called for electronic voting in the territory, the change is welcome.

“For the past two elections, we have gone on to one evening to the other counting the at large votes,” Ms. Penn said. “We wanted to find something that would eliminate that process and people wouldn’t have to stay up all night and work into the other day. The results will be known in an hour, half-hour.”

In addition, she explained, the scanner has the capability to troubleshoot all sorts of perplexing scenarios, including undervoting, overvoting, and spoilt ballots. For instance, if voters make an accidental mark, they can “go back to the poll clerks and have a new ballot issued,” Ms. Penn said. “You can come back and scan. … It will be counted and the machine will tell you that you have voted.”

Glenford “Chappy” Maduro was one of the first in line at 10 a.m. to cast his mock vote, and he stayed until the end to hear the results.

“It’s very important to get firsthand instruction before the day of the election to be more educated when you go in there,” he explained, adding that the new equipment was easy to use and he suspects it might simplify the job of keeping track of who has voted. “Nobody could say you didn’t put in a ballot, or take it out, because it’s in the machine.

It’s just now to see how soon the results can be provided.”

Nonetheless, he worries that some elderly voters may need extra help to understand the new process.

“They’re the ones who might need more educating,” he said.

Earlier in the day, Ms. Penn demonstrated the scanner to the voters pouring through the doors of the complex.

On the other side of the room, Mark Radke, a manager at United States-based voting equipment manufacturer Elections Systems & Software, walked other voters through the e-poll book process.

“Today when a voter walks into a polling division, there’s a paper poll book there with their name in it; the official would have to flip through the pages, find that voter’s name and so on, and it would take some time; what we’re doing is automating that process.”

He showed them how to key in a few pieces of information such as names and dates of birth, and sign their electronic signature.

After they did that, out popped a small slip of paper with their information, which they then handed over to another poll worker in order to receive their ballot. Voter identification cards can speed up the process further, and Ms. Penn said they may be a possibility for this election or the next.

“If we have those, it will make the process even more simple … because you will just swipe the card and the information comes up,”she said, adding, “This machine doesn’t store any ballot information. Your vote stays completely anonymous.”

The e-poll books, besides speeding up voting,will give the election supervisor the tools to eliminate the possibility of anyone trying to vote in multiple districts.

“Once a voter registers and votes in one district, they will not be able to vote in another district on that day,” Ms. Penn said.

The machines use encrypted data that allows the results to be transported securely from one location to another, according to government.

Earlier this year, Ms. Penn’s office hosted two visits from USVI Supervisor of Elections Caroline Fawkes and a representative of Elections Systems & Software, who demonstrated the new equipment to Ms. Penn and her colleagues and later to members of the House of Assembly.

“We said we would like to have those as well, and we will go back to the general elections in November to see how everything comes together,” Ms. Penn said.

In his recent Speech from the Throne, Gov. Gus Jaspert said the government intended to pass a General Elections Act based off a consolidation of election legislation from 1994 and recommendations made in the 2015 General Elections Report.

“During an election period, accuracy of the information being disseminated is important, particularly on Election Day,” he said.

The process is already partly complete. Earlier this month, Cabinet approved electronic voting, leaving only HOA to pass legislation. Although Ms. Penn said she was given no timeline for that, she has been assured it will happen in time for the next general election.

“I see no reason why it would not be passed,” she said.

While she waits for government to act, Ms. Penn is still reaching out to potential voters, some of whom may not know there is still time to come into her office and register. “The voter list is closed for 2018,” she said, “but not for the general election. They still have time to register.”