Heavy rains, flooding and inter- mittent squalls hit the territory on Monday and Tuesday as Tropical Storm Earl passed to the north. “There were damages,” Jasen Penn, director of the …

END_OF_DOCUMENT_TOKEN_TO_BE_REPLACED 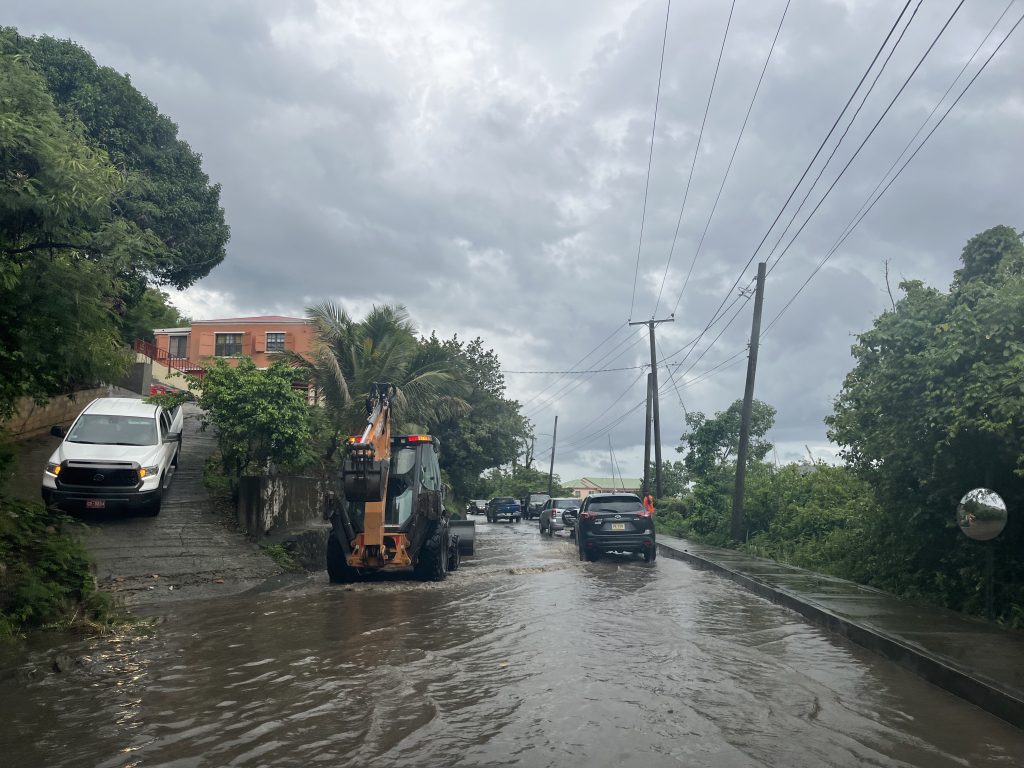 Heavy equipment pushes water off the road to clear the way for drivers on Monday afternoon in Manuel Reef. (Photo: ZARRIN TASNIM AHMED)

Heavy rains, flooding and inter- mittent squalls hit the territory on Monday and Tuesday as Tropical Storm Earl passed to the north.

“There were damages,” Jasen Penn, director of the Department of Disaster Management, said on Tuesday afternoon. “We had a report about a retaining wall that fell in East End. We had reports from Anegada where there was some flooding. We saw some areas that experienced rock falls. We saw a small home sustain damage in Jost Van Dyke.”

All told, the storm brought more than three inches of rainfall, according to Mr. Penn.

“We still have to go through our weather station’s database, but I would say preliminary readings are well over three inches of rain in Road Town,” he said. “This storm has been the closest one to us this year. I think the eye passed 60 miles northeast of us.”

On Monday afternoon in Manuel Reef, heavy equipment was employed to drain water off one side of the road where rain pooled.

Many stretches of the Sir Francis Drake Highway between West End and Road Town were closed on one side as cars took turns passing slowly through accumulated water.

Earl became the Atlantic season’s second hurricane on Tuesday at it headed north.

It was expected to veer northeast, possibly affecting Bermuda as of the Beacon’s press deadline yesterday afternoon.

To warn residents about inclement weather, Mr. Penn said, DDM consults with forecasters from the Antigua and Barbuda Meteorological Service, as well as using information from the United States National Oceanographic and Atmospheric Administration and from radars out of Puerto Rico.

“As the systems get closer to us, we do expect more localised information,”he said.“Typically, there’s a threshold when the Antigua and Barbuda Meteorological Services will issue alert statements. That doesn’t mean we’re under a watch or warning, but it lets people know we have a system in our vicinity that has the potential to affect us.”

Airing such information ahead of time allows business and residents to prepare their emergency contingency plans, Mr. Penn said.

After some initial rain from Earl, for instance, DDM warned residents on Monday night about the possibility for flooding.

“Rapid rises on rivers and mudslides in areas of steep terrain is also possible, especially across the central interior region of Puerto Rico,” the DDM stated. “Locally considerable flood impacts are possible in areas that will receive heavier rainfall totals.”