Tourist arrivals during November and December totalled 40,950, up about 42 percent from 28,857 in the same period in 2021, Premier Dr. Natalio “Sowande” Wheatley announced Friday in apparent reference …

END_OF_DOCUMENT_TOKEN_TO_BE_REPLACED 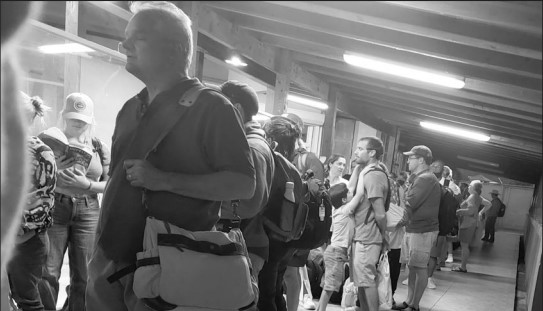 Tourist arrivals were up in November and December, Premier Dr. Natalio “Sowande” Wheatley announced Friday. He also said government is working to minimise congestion at ports of entry, but last Thursday evening many tourists waited well over an hour to clear immigration and customs at the Road Town Ferry Terminal (above). (Photo: Freeman Rogers)

Tourist arrivals during November and December totalled 40,950, up about 42 percent from 28,857 in the same period in 2021, Premier Dr. Natalio “Sowande” Wheatley announced Friday in apparent reference to non-cruise-ship visitors.

However, they were still nearly 32 percent below the pre-pandemic numbers for those months in 2019 (60,120) and more than 44 percent below the 73,754 arrivals in the corresponding period in 2016, the last year before Hurricane Irma.

Dr. Wheatley nevertheless said the numbers were good news. “Preliminary feedback suggests that the 2022-2023 tourist season is off to a positive start,” he added.

He also stated that ports of entry across the territory have been busy and that venues such as Trellis Bay and Jost Van Dyke attracted larger gatherings when compared to previous years. In 2023, such events are expected to continue, the premier said, citing Tourism Director Clive McCoy.

“The director has also advised that the BVI Tourist Board will be focusing as well on training in hospitality and other related areas in the industry, especially to improve customer service and visitor experience,” Dr. Wheatley said. “This will be possible as the Tourist Board has been allocated approximately $10 million in the 2023 budget.”

He added that the government has been working to improve the arrival experience at the territory’s ports of entry. In recent weeks, arriving residents and visitors alike have complained about congestion and long wait times, and last Thursday evening many tourists waited more than an hour to clear immigration and customs at the Road Town Ferry Terminal. The premier, however, said officials are addressing the problem.

“At the seaports, international ferry arrivals are also being spaced apart to reduce passenger congestion on arrival and to assist in reducing the time passengers spend for clearance with immigration and customs,” he said.

The Port Ambassadors programme, which was “affected by the pandemic,” has been restored at the Road Town Ferry Terminal and will soon operate at other ports as well, he added. Improvements are also in the works for the territory’s airports, according to Dr. Wheatley. “Plans are afoot to enhance the facilities at the Terrance B. Letttsome International Airport, such as the arrival and departure halls by expanding these spaces to make them more comfortable and relaxing,” he said. “Work has begun to upgrade the hand baggage search machines.

This upgrade will allow for passengers’ bags to be processed more efficiently and reduce the time spent at the security checkpoint.”