When the sun came up on Aug. 7 and hundreds of people were dancing their way through East End, Jessika Robinson knew she had to be in the thick of …

END_OF_DOCUMENT_TOKEN_TO_BE_REPLACED 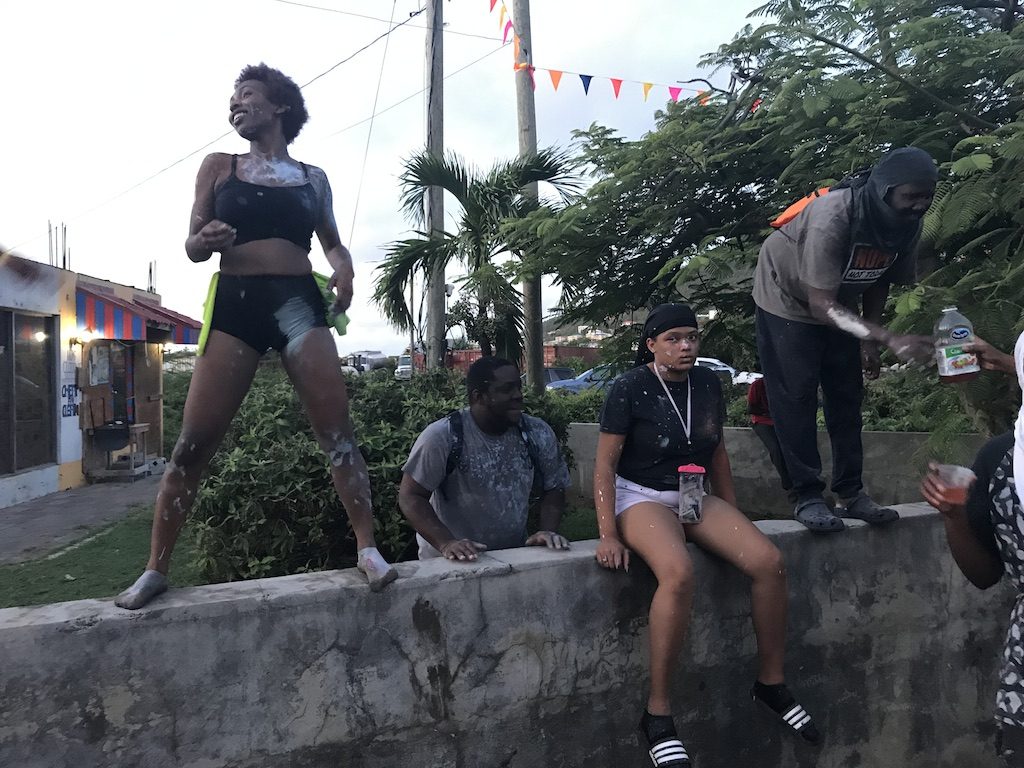 Revellers dance on the wall during the EE/LL Rise and Shine Tramp on Wednesday, Aug. 3 (Photo: CLAIRE SHEFCHIK)

When the sun came up on Aug. 7 and hundreds of people were dancing their way through East End, Jessika Robinson knew she had to be in the thick of it. After all, she had travelled all the way from St. Thomas to be there.

“It’s a different kind of culture I’ve never been exposed to,” the upstate New York native explained as she followed bands pumping music from the Youth Empowerment Project to the Beef Island bridge.

Though she now lives in St. Thomas, it was the first year she was able to get time off work to make the journey to Tortola.

“You can just have fun in the streets dancing,” she said, ducking a fellow reveller who lobbed a bucket of paint and water at the crowds.

The early morning festivities marked the last day of East End/Long Look festival events, which kicked off on Aug. 3 with the Festival of Culture and Praise at The Stickett.

Organising committee member Jurine Scatliffe-George called the event a success, even though it was hampered for another year by the lack of a dedicated space.

As in recent years, most of the music and cultural activities took place at a site owned by the Penn family in the area known as Brackwell.

“It is not the ideal site, but it is what we have available to us at the moment,” she said.

The kickoff ceremony was “a new event for us,” said Ms. Scatliffe-George, adding, “We wanted to dive a little more into heritage and culture, and for the first time incorporated … Negro- type spirituals.” Area churches got in on the activities, too.

The EE/LL festival village was named after Alva Dawson Lettsome, who originally was in tended to be the namesake for the 2017 festival, which was cancelled because of massive flooding.

Ms. Scatliffe-George added that the hundreds of people who attended the village’s Rise and Shine Tramp meant that the event “could be marked as one of the largest in East End history.”

Altogether, the events went off without a hitch, she said, giving credit to police for maintain- ing a strong presence.

“In a nutshell, all of the festivities went extremely well,” she said. “We wanted to push forward and keep the pace with our entertainment lineup, which was spectacular. … Kes was off the chain, Christopher Martin came and gave everyone a great evening.”

Delroy Ogle lives in East End and wasn’t able to attend the festival last year, after being forced to leave the territory due to Hurricane Irma, but he was happy to be back.

Perching on a wall as his friends joined the procession, he said, “There’s nothing else to do, so you come and enjoy the cultural celebration. I’m not originally from [the VI] but it’s Mother Earth, and praise God for everything.”

He also praised the police for making sure revellers stayed safe. “It brings a sense of togetherness and unity in some form; you get together with people you don’t see for the busy days of working,” he said, adding, “Most definitely after the hurricane, the people have not gotten to enjoy themselves in a big way and in a uniform front after the catastrophe from Irma.”

Ms. Scatliffe-George agreed that although the festival is resurging, it is still finding its bearings after the hurricane.

She explained that it will continue to evolve as community members express their opinions about what they want.

Already, the committee is renewing its focus in East End on culture, from the inclusion of traditional games and activities like marbles, sack races, cow milking and pole plaiting, to an event focused on reuniting the descendants of the freed people of the 18th century Nottingham Estate in Long Look.

A small group of residents has been “working for some time on Nottingham slaves and trying to pin together the family trees of those slaves, and most of that information was made available to the persons who came,” she said.

She noted that the EE/LL festival is actually two years older than the August Emancipation Festival itself and thus celebrated its 67th anniversary with this year’s activities.

One future goal for the week is restoring events to Festival Monday.

“The Seventh and Eighth district are one because we represent both,” she said. “Sometimes people don’t understand what it takes to pull off a festival. You’re working against so much criticism … but you just have to push forward and make the best of the situation.”

As the sun grew stronger during the Aug. 7 parade, Ms. Robinson and her friends grooved to sounds of the VI group VIBE and St. Kitts-based band Nu Vybes.

“Whether you drink or you don’t drink, it’s a time for everyone to get together and just dance and celebrate,” she said as she twisted her way through the streets.