A waterproof, airtight container that could store a dozen solar- or battery-powered communications devices — including radio transmitters — sits in an office at the newly re-opened East End/Long Look …

END_OF_DOCUMENT_TOKEN_TO_BE_REPLACED 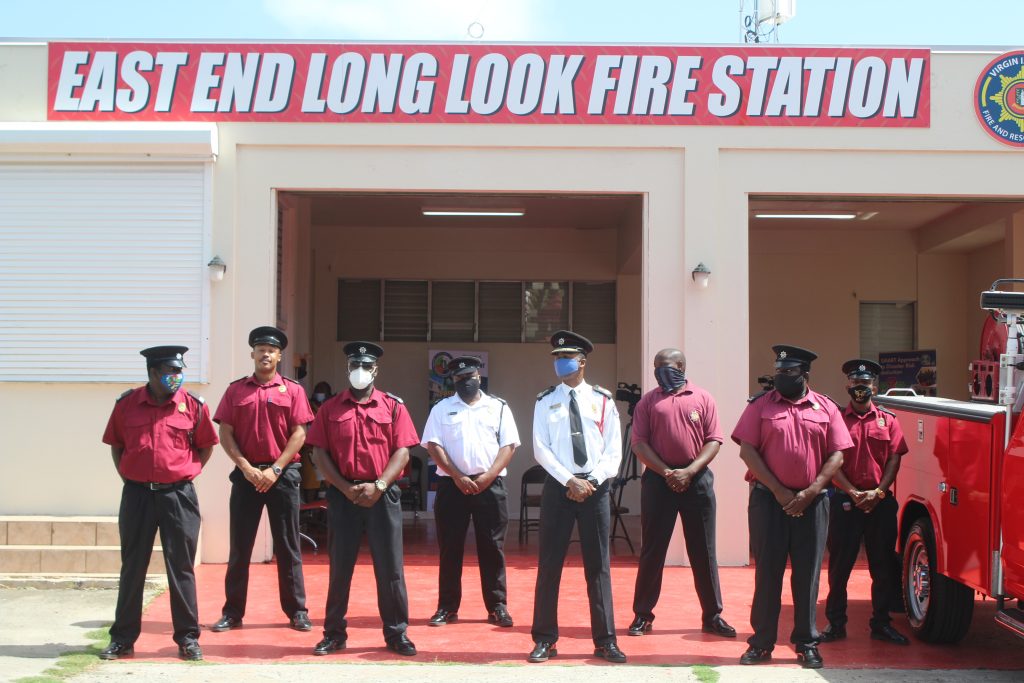 A waterproof, airtight container that could store a dozen solar- or battery-powered communications devices — including radio transmitters — sits in an office at the newly re-opened East End/Long Look Fire Station.

Technology that can be transported and used to keep residents informed in disaster situations is now within the East End community, which struggled after Hurricane Irma in 2017.

During an opening ceremony, Governor Gus Jaspert provided context for the occasion and explained the importance of having a satellite emergency operations centre.

“We all remember back in 2017 when we were faced with our most difficult challenges in terms of dealing with the aftermath of Hurricane Irma, and one of the most pressing challenges was to ensure that we were connecting as a government, connecting as a National Emergency Operations Centre, connecting out to the different communities,” he said. “One of the things I got to know was the strength of each area, and particularly this area, where they pulled together as a community and helped each other out. One of the things that hindered us was our inability to communicate and connect effectively across the territory.”

The fire station serves districts Seven and Eight, which are both heavily populated, explained Opposition Leader Marlon Penn (R-D8), who gave remarks at the ceremony.

“I’ve been advocating for many years to ensure this facility be up and running to the standard that’s befitting to the community it sits in,” he said. “This is a very important step because a district as large and as dense as ours needs to have a quick response not just in hurricanes but any such disasters.”

Mr. Penn recalled that he and his brother, Department of Disaster Management Communications Manager Jasen Penn, were a part of an auxiliary team of about 95 people who banded together after Irma to support the community. Mr. Penn said the purpose of the team was to have “people who are trained and able to come” at short notice in case of a disaster.

He added that the community was one of the “hardest hit” during 2017, and that it lacked sufficient communication ability.

The equipment in the satellite EOC includes a FM transmitter, a system data radio that can send text messages, a VHF base and radios, and a solar map that provides solar power for the handheld radios.

All of the equipment is mobile and able to fit inside a waterproof container, ensuring that the entire operation can be moved if needed during a disaster.

The satellite facility is the first of its kind in the Virgin Islands, and Mr. Penn said more satellite EOCs will be installed throughout the territory, but he didn’t know how many.

Setting up satellite EOCs is part of an initiative that began in December 2017 aimed at making neighbourhoods safer and more eco-friendly in the face of natural disasters.

Through a “SMART Communities” model developed by the DDM in 2014 — which was financed by a roughly $650,000 grant from the Community Disaster Risk Reduction Fund managed by the Caribbean Development Bank — disaster risk reduction initiatives were piloted in flood-prone areas: Jost Van Dyke, Sea Cows Bay and East End/Long Look. Those included emergency response training, business continuity training, mangrove restoration and replanting, and a community-wide cleanup in the East End area.

The JVD Preservation Society, BVI Red Cross, Rotary, the Lions Club of Tortola and the Adventist Development and Relief Agency support various activities in those locations.

Many donors contributed to the “community project,” which was largely spearheaded by Rotary clubs. According to Education, Culture, Youth Affairs, Fisheries and Agriculture Minister Dr. Natalio “Sowande” Wheatley, Rotary donated more than $70,000.

On Monday, Rotarians stood to speak about their experience and give background on the renovations at the fire station. They said that the Aruba-based firm Professional Roofing, which last year received a $1.3 million contract for work on the Ralph T. O’Neal Administration Complex, donated more than $25,000 to replace the roof, and that a plumber from ABC Construction donated toilets after hearing it was a “local project.”

Along with a new roof, the air conditioning was changed throughout the building and new showers were installed. Rotarians painted the building, they said, and took pride in the “engine red” floor of the station.