COVID-19 > Re-opening for business: After lockdown, economy chugging back to life

Re-opening for business: After lockdown, economy chugging back to life

On Monday morning, for the first time in more than three weeks, patrons queued up in front of banks, farmers sold their wares on shaded sidewalks, and residents wandered supermarket …

END_OF_DOCUMENT_TOKEN_TO_BE_REPLACED 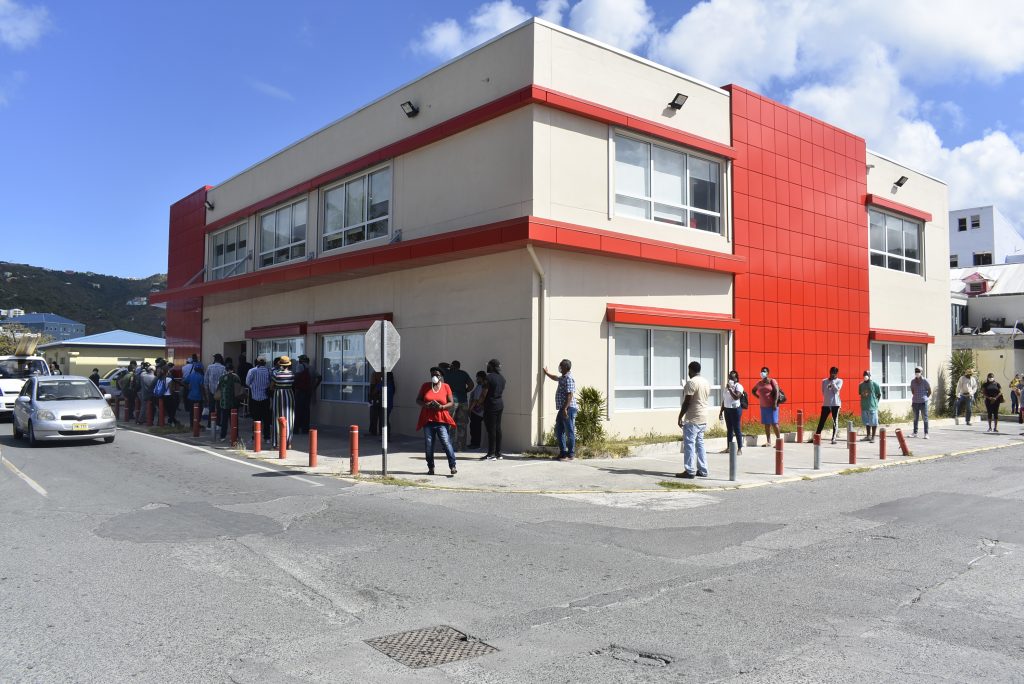 In Road Town on Monday and Tuesday morning, traffic clogged parts of Wickhams Cay and queues stretched in front of some business, with residents free to take care of essential services after almost three weeks. (Photo: JOEY WALDINGER)

On Monday morning, for the first time in more than three weeks, patrons queued up in front of banks, farmers sold their wares on shaded sidewalks, and residents wandered supermarket aisles, scanning the selection for something that caught their eye.

Following a 24-hour-a-day curfew that closed the territory’s schools, suspended the public service and gutted the economy, “essential” businesses were allowed to reopen, but only from 6 a.m. to 1 p.m. and in compliance with social distancing protocols.

As a result, parts of Main Street and Wickhams Cay were clogged with traffic, and lengthy queues in front of banks sometimes bubbled over with tension, while other parts of town were more tranquil.

“This is the situation: We have to deal with it,” said Bebe Sing, who was sitting at a table after purchasing some items at a small Road Town market. “It’s better than nothing.”

These changes, indeed, constitute the “new regular” in which Virgin Islands residents should be prepared to live, even as the territory begins to restart the economy, Premier Andrew Fahie said during a Facebook broadcast Friday night.

With containment efforts ongoing — government announced Friday that a sixth resident tested positive for Covid-19 —  the territory is using a “phased approach” to restart the economy.

At least until May 11, only supermarkets, pharmacies, bakeries, gas stations, construction companies, fishing and farming operations, legal and financial services, and other businesses critical to the territory’s economy will be allowed to open, Mr. Fahie said.

On Tuesday, however, government updated the list of entities allowed to open to include funeral homes, churches, beauty supply stores, veterinary practices, and restaurants for delivery and takeout, among others.

Until May 11, government will keep the territory’s borders shut and enforce a curfew from 1 p.m. to 6 a.m., with businesses allowed to serve residents only during this period, Mr. Fahie said. Gatherings of more than 20 people are still prohibited, and beaches, bars and dine-in restaurants are to remain closed, Mr. Fahie said.

While individuals may exercise outdoors during the allowed hours, they are encouraged to do so responsibly, avoiding groups and continuing to socialise only with people in their households.

According to a Friday circular from Deputy Governor David Archer Jr., the public service is scheduled to reopen in earnest on Monday, though in the meantime certain services will be rendered remotely or “through approved social distancing measures.”

Before businesses could welcome customers on Monday, they were required to receive approval from a social distancing task force charged with ensuring they had complied with all of the new requirements.

To meet this threshold, businesses had to install at least two hand washing basins for customers to use before entering or exiting the premises; mark where people should stand so as to keep their distance from others; sanitise cash; and ensure that all customers wear face masks, Mr. Fahie said.

Taxi drivers must follow a different set of social distancing rules, which include seating only one customer per row and requiring all passengers to wear masks if there are more than two in a vehicle, he added.

But on Monday and Tuesday, the social distancing protocols varied from business to business.

First Bank in Road Town, where some claimed their spot in line as early as 5 a.m., allowed eight people at a time inside: six to make deposits and two to speak with a customer service representative, said Cyril Richards, a security guard stationed outside the bank.

In front of the National Bank of the Virgin Islands on Monday, where marks on the ground denoted where customers should stand, tensions flared as some patrons accused others of cutting in front of them or generally disobeying the order of the queue.

One woman explained her dissatisfaction to a masked police officer observing the scene, a rifle slung across his chest.

While some of the customers waiting to be served at First Bank on Tuesday morning were “disgruntled” by the precautionary measures, Mr. Richards estimated that 95 percent of those in line waited without complaint.

In Pasea, Rite Way Food Market constructed a physical line out front using caution tape, traffic cones and potted plants, but it was empty at about 9:30 a.m. Monday.

A security guard sprayed customers’ hands with sanitiser before letting them through the doors.

Inside, which was also fairly empty of customers, lines of green duct tape indicated where people should stand before paying for their purchases.

Other businesses, however, conducted themselves less formally.

On Monday and Tuesday, people clustered around fish and farm stands erected on Waterfront Drive that did not organise queues or supply hand soap or sanitiser, though most residents wore masks and appeared conscientious of not standing too close to one another.

Transportation services were also among the businesses that got a green light to reopen Monday, with taxis traversing the territory’s roads and ferries travelling from island to island within the territory.

“I saw a lot of the people on the side of the road as I was coming in from East End around [noon] waiting for a bus service,” he said, adding, “I think that form of transportation is needed.”

For the territory’s taxi market, this period of restricted movement is essentially an “expanded slow season,” though there are still ways for drivers to capitalise on their earnings, such as by monitoring the ferry schedules, Mr. Henry said.

Of course, the easiest way to turn a profit is to fit as many people into a bus as possible, Mr. Henry said, though this practice violates social distancing principles.

The premier noticed the same thing, he said in a Monday evening announcement, chastising drivers for taking on too many passengers in violation of the government’s rules.

But with taxi drivers trying to bounce back after almost a month without an income, Mr. Henry said, “Right now it’s a hustle.