Economy to start reopening in spite of new Covid-19 case

The sixth case of Covid-19 was confirmed in the territory Friday, but the government plans to proceed with a phased reopening of the economy starting Monday morning as essential businesses …

END_OF_DOCUMENT_TOKEN_TO_BE_REPLACED 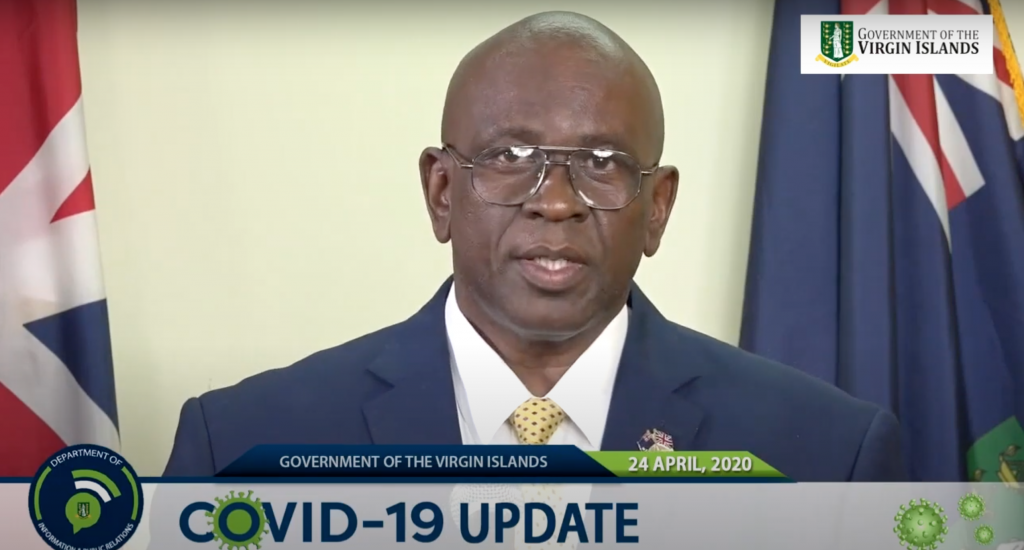 The Virgin Islands economy will remain in a limited capacity on Monday, though a new Covid-19 case has been announced and a resident with the disease is being isolated in the hospital, said Deputy Premier Carvin Malone. (Photo: GIS)

The sixth case of Covid-19 was confirmed in the territory Friday, but the government plans to proceed with a phased reopening of the economy starting Monday morning as essential businesses open their doors for limited hours and residents are given permission to exercise outdoors.

From 6 a.m. to 1 p.m. for at least a 14-day period, residents will be able to frequent critical businesses including grocery stores, bakeries, pharmacies, gas stations, and fish and farm purveyors, and utilise public transit services including inter-island ferries and taxis, Premier Andrew Fahie said during a Friday Facebook broadcast.

But the easing of these restrictions does not signify a return to pre-pandemic life, according to Governor Gus Jaspert.

As government reboots the economy, reopened stores will have to adhere to strict social distancing protocols, cash will be sanitised, gatherings will remain prohibited, and those who do exercise outdoors are implored to do so either alone or with other members of their households, Mr. Jaspert said.

Taxi drivers will only be allowed to transport a small number of passengers who must sit one to a row, Mr. Fahie added.

Beaches, bars and restaurants are to remain closed, and for at least the first 14 days of this new arrangement, the territory’s borders will be kept shut, the premier added.

Before reopening Monday, business owners must have their premises inspected by members of a new social distancing monitoring task force, which will ensure that businesses have in place demarcations for where people should stand, and at least two washbasins or hand-sanitisation stations, among other measures, Mr. Fahie said.

The premier also called on business owners to allow their employees enough time to get to and from work within the curfew hours.

If businesses do not comply with the new social distancing social protocols, they may be ordered to close, Mr. Fahie said.

The decision to allow for movement within the territory was made with consideration of advice from the National Security Council and the territory’s senior medical professionals, who leaders will continue to heed as they continue to ease restrictions, the governor said.

“We will keep our response under constant review,” Mr. Jaspert said, adding, “If we need to tighten control, we will do so.”

Only ferries and cargo boats will be allowed to navigate the territory’s waters during this next phase, while all commercial and private vessels will be banned from operating, Mr. Jaspert said.

This easing of restrictions comes as another resident has tested positive, said Deputy Premier Carvin Malone.

Since Sunday, when he last addressed the territory, officials at the Caribbean Public Health Agency have tested nine more samples from the VI, eight of which came back negative and one of which came back positive, said Mr. Malone, who is also the minister of health and social development.

Additionally, there are currently 189 residents under quarantine, one of whom is in isolation at the Dr. Orlando Smith Hospital, Mr. Malone said.

To date, six Covid-19 cases have been confirmed in the VI, with two cases active, three recoveries, and one death, the minister added.

“Health and well-being is a shared responsibility across all communities, businesses, faith-based and social organisations, households, and at the individual level,” he said. “We must make urgent and serious efforts to adjust to new realities in our every-day lives.”