In 2015 the Virgin Islands proudly set an example when it became the first government in the Caribbean to pass a legal framework for a climate change trust fund. To …

END_OF_DOCUMENT_TOKEN_TO_BE_REPLACED 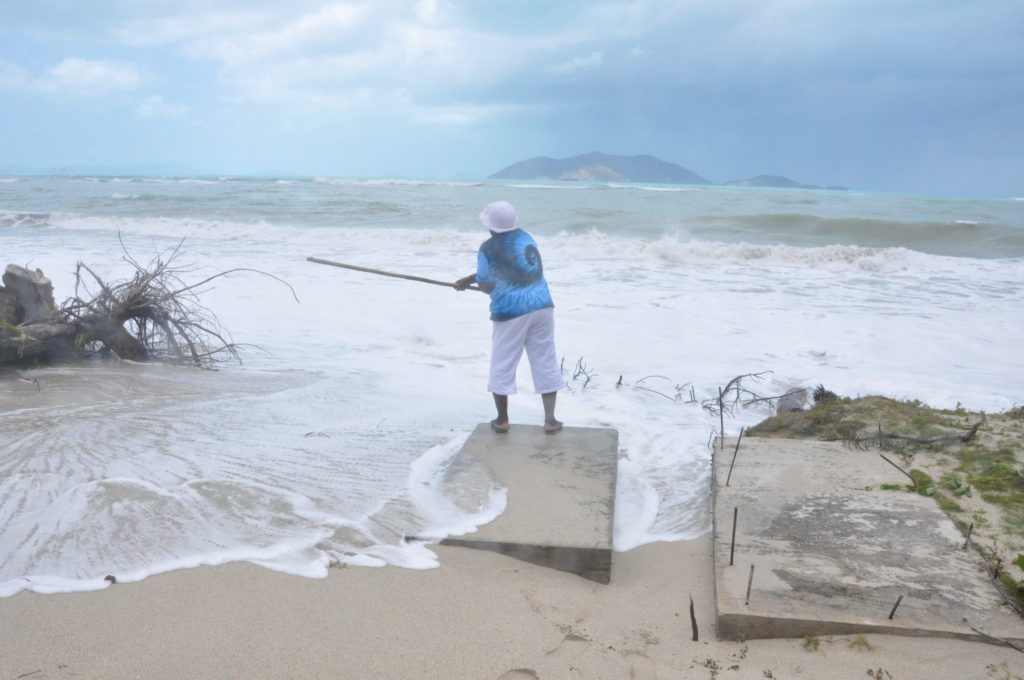 Joycelyn Rhymer prays for protection as waves wash into the Cane Garden Bay graveyard during a swell in March 2018. Scientists say that global warming will raise the sea level and bring more destructive swells in the future. The Climate Change Trust Fund, whose board members’ appointments were recently revoked by the new government, was established to help the territory prepare. (File photo: FREEMAN ROGERS)

In 2015 the Virgin Islands proudly set an example when it became the first government in the Caribbean to pass a legal framework for a climate change trust fund.

To date, however, the fund has no money.

This is very disappointing, especially considering that the government has been collecting a $10 environmental levy from non-cruise-ship tourists for more than a year.

Since Sept. 1, 2017, when the tax took effect, more than $800,000 has been collected. But it reportedly remains in limbo, with debate ongoing about how it will be allocated.

The Environmental Protection and Tourism Improvement Fund Act 2017 requires 40 percent of the levy to be earmarked for activities related to climate change and environmental protection; 40 percent to go toward tourist sites and tourism-related activities; and 20 percent to be devoted to tourism marketing.

Starting as soon as possible, the first category should go directly to the Climate Change Trust Fund.

The fund’s board members, who have expertise in various relevant areas, are charged with apolitically allocating monies to environmental initiatives and other projects designed to help the VI prepare for climate change. In a territory where cronyism and politics routinely waste tax dollars, such a system is a sound idea.

But without even the money to hire staff, the fund will be able to do little or nothing.

Meanwhile, global warming looms. Scientists are predicting increasingly dire outcomes that will hit the VI hard, such as rising sea levels, coral die-off, and more major storms like the ones that struck the territory last year, among other devastating effects.

On the international stage, VI leaders have done a decent job of spreading the word about the territory’s plight. But here at home, they have repeatedly failed to complete the needed actions.

The 2012 Climate Change Adaptation Policy is a telling example. The document is a wide-ranging and well-conceived strategy for the way forward, and leaders should be commended for adopting it six years ago. Unfortunately, the great majority of the policy’s goals — most of which were set for completion in two to four years — remain undone.

The trust fund must not be similarly neglected. As soon as possible, a large portion of the eco-levy should be allocated to the body so that the board can start spending that money and earning the confidence of donors in order to raise other contributions as well.

Government should also revisit the 2012 adaptation policy. A five-year review scheduled for last year is now overdue, and it should be completed straightaway so that new timelines can be set to help guide the CCTF board, the government, businesses and other policymakers and stakeholders.

As Hurricane Irma proved, climate change is much too dire a threat to play down.