Opinions and Commentary > EDITORIAL: Freedom of speech is under attack in Virgin Islands

EDITORIAL: Freedom of speech is under attack in Virgin Islands

February 12 was a dark day for freedom of speech in the Virgin Islands. That morning, Governor Gus Jaspert assented to an absurd law that could mean an astronomical fine …

END_OF_DOCUMENT_TOKEN_TO_BE_REPLACED 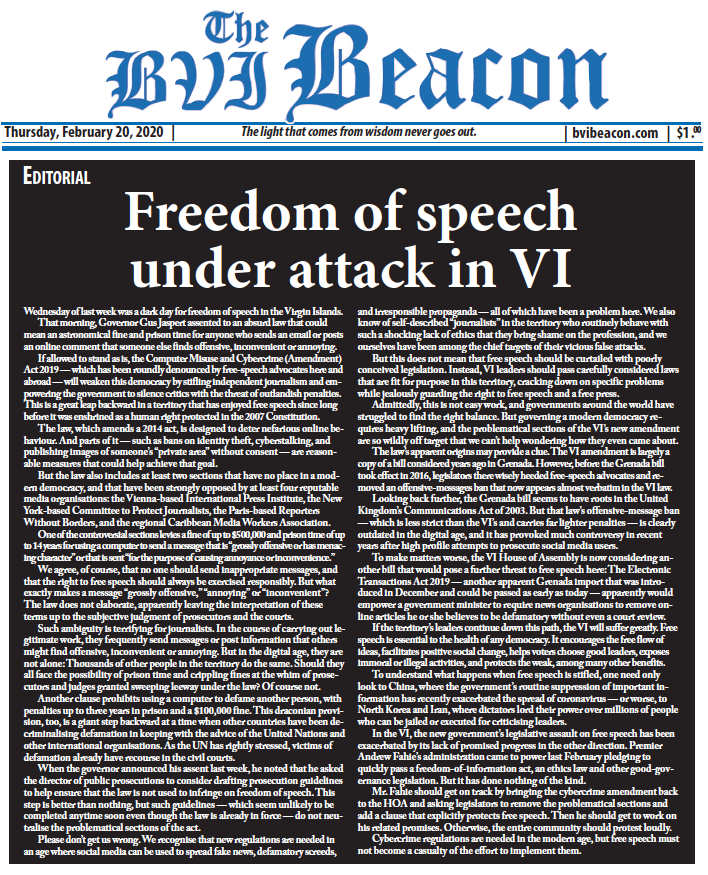 Because of the gravity of the cybercrime amendment’s threat to free speech, an editorial filled the Beacon’s front page last Thursday for the first time in the newspaper’s history.

February 12 was a dark day for freedom of speech in the Virgin Islands.

That morning, Governor Gus Jaspert assented to an absurd law that could mean an astronomical fine and prison time for anyone who sends an email or posts an online comment that someone else finds offensive, inconvenient or annoying.

If allowed to stand as is, the Computer Misuse and Cybercrime (Amendment) Act 2019 — which has been roundly denounced by free-speech advocates here and abroad — will weaken this democracy by stifling independent journalism and empowering the government to silence critics with the threat of outlandish penalties. This is a great leap backward in a territory that has enjoyed free speech since long before it was enshrined as a human right protected in the 2007 Constitution.

The law, which amends a 2014 act, is designed to deter nefarious online behaviour. And parts of it — such as bans on identity theft, cyberstalking, and publishing images of someone’s “private area” without consent — are reasonable measures that could help achieve that goal.

But the law also includes at least two sections that have no place in a modern democracy, and that have been strongly opposed by at least four reputable media organisations: the Vienna-based International Press Institute, the New York-based Committee to Protect Journalists, the Paris-based Reporters Without Borders, and the regional Caribbean Media Workers Association.

One of the controversial sections levies a fine of up to $500,000 and prison time of up to 14 years for using a computer to send a message that is “grossly offensive or has menacing character” or that is sent “for the purpose of causing annoyance or inconvenience.”

We agree, of course, that no one should send inappropriate messages, and that the right to free speech should always be exercised responsibly. But what exactly makes a message “grossly offensive,” “annoying” or “inconvenient”? The law does not elaborate, apparently leaving the interpretation of these terms up to the subjective judgment of prosecutors and the courts.

Such ambiguity is terrifying for journalists. In the course of carrying out legitimate work, they frequently send messages or post information that others might find offensive, inconvenient or annoying. But in the digital age, they are not alone: Thousands of other people in the territory do the same. Should they all face the possibility of prison time and crippling fines at the whim of prosecutors and judges granted sweeping leeway under the law? Of course not.

Another clause prohibits using a computer to defame another person, with penalties up to three years in prison and a $100,000 fine. This draconian provision, too, is a giant step backward at a time when other countries have been decriminalising defamation in keeping with the advice of the United Nations and other international organisations. As the UN has rightly stressed, victims of defamation already have recourse in the civil courts.

When the governor announced his assent this month, he noted that he asked the director of public prosecutions to consider drafting prosecution guidelines to help ensure that the law is not used to infringe on freedom of speech. This step is better than nothing, but such guidelines — which seem unlikely to be completed anytime soon even though the law is already in force — do not neutralise the problematical sections of the act.

Please don’t get us wrong. We recognise that new regulations are needed in an age where social media can be used to spread fake news, defamatory screeds, and irresponsible propaganda — all of which have been a problem here. We also know of self-described “journalists” in the territory who routinely behave with such a shocking lack of ethics that they bring shame on the profession, and we ourselves have been among the chief targets of their vicious false attacks.

But this does not mean that free speech should be curtailed with poorly conceived legislation. Instead, VI leaders should pass carefully conceived laws that are fit for purpose in this territory, cracking down on specific problems while jealously guarding the right to free speech and a free press.

Admittedly, this is not easy work, and governments around the world have struggled to find the right balance.

But governing a modern democracy requires heavy lifting, and the problematical sections of the VI’s new amendment are so wildly off target that we can’t help wondering how they even came about.

The law’s apparent origins may provide a clue. The VI amendment is largely a copy of a bill considered years ago in Grenada. However, before the Grenada bill took effect in 2016, legislators there wisely heeded free-speech advocates and removed an offensive-messages ban that now appears almost verbatim in the VI law.

Looking back further, the Grenada bill seems to have roots in the United Kingdom’s Communications Act of 2003. But that law’s offensive-message ban — which is less strict than the VI’s and carries far lighter penalties — is clearly outdated in the digital age, and it has provoked much controversy in recent years after high profile attempts to prosecute social media users.

To make matters worse, the VI House of Assembly is now considering another bill that would pose a further threat to free speech here: The Electronic Transactions Act 2019 — which was introduced in December and could be passed soon — apparently would empower a government minister to require news organisations to remove online articles he or she believes to be defamatory without even a court review.

If the territory’s leaders continue down this path, the VI will suffer greatly. Free speech is essential to the health of any democracy. It encourages the free flow of ideas, facilitates positive social change, helps voters choose good leaders, exposes immoral or illegal activities, and protects the weak, among many other benefits.

To understand what happens when free speech is stifled, one need only look to China, where the government’s routine suppression of important information has recently exacerbated the spread of coronavirus — or worse, to North Korea and Iran, where dictators lord their power over millions of people who can be jailed or executed for criticising leaders.

In the VI, the new government’s legislative assault on free speech has been exacerbated by its lack of promised progress in the other direction. Premier Andrew Fahie’s administration came to power last February pledging to quickly pass a freedom-of-information act, an ethics law and other good-governance legislation. But it has done nothing of the kind.

Mr. Fahie should get on track by bringing the cybercrime amendment back to the HOA and asking legislators to remove the problematical sections and add a clause that explicitly protects free speech. Then he should get to work on his related promises. Otherwise, the entire community should protest loudly.

Cybercrime regulations are needed in the modern age, but free speech must not become a casualty of the effort to implement them.